If you walk into my living room, you will see a small white WiFi camera sitting on a shelf. It lets me check in on my Goldendoodle Nava when we’re out. These days, however, many WiFi cameras (often called Spy Cameras) are hidden from view. That’s where the SpyFinder Pro Hidden Camera Detector comes in. It is seeking funding on Kickstarter, and it works! 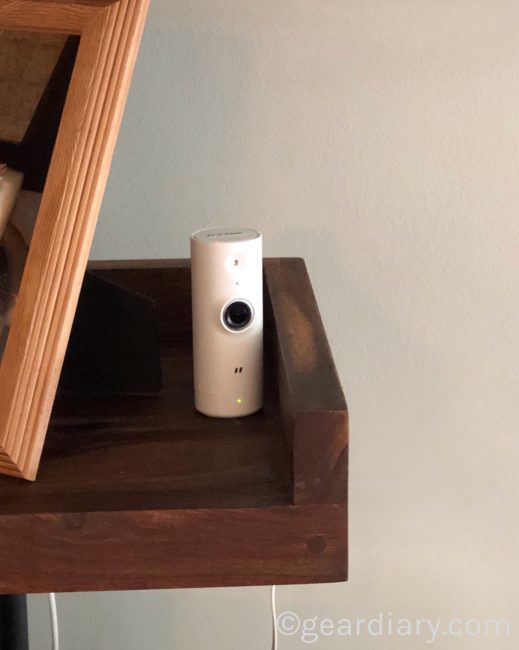 This is what our living room camera looks like. It’s out in the open, so we aren’t trying to hide anything. 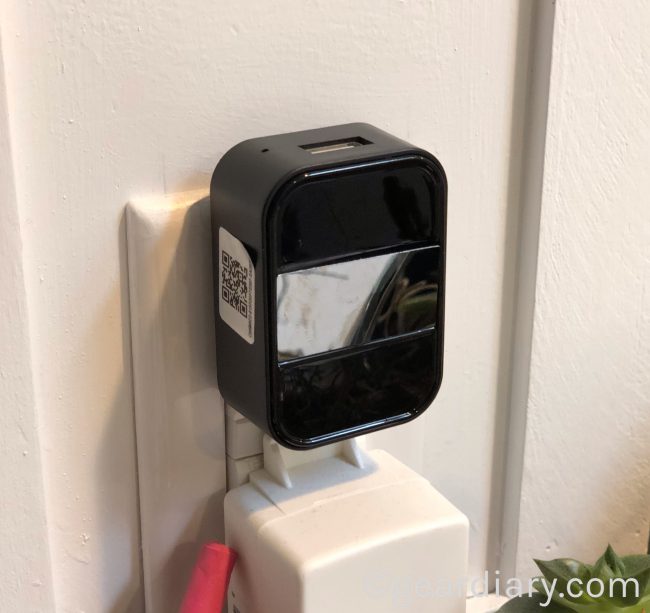 Thing is … this is a camera too. 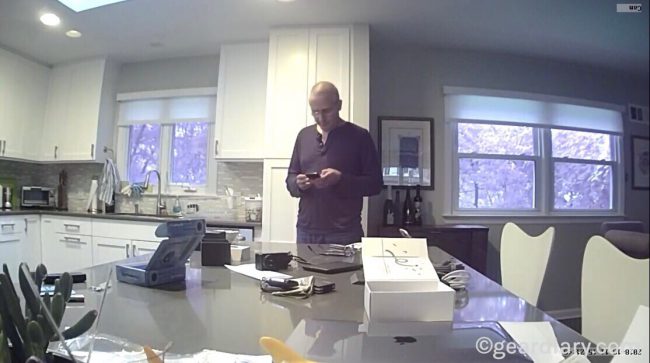 This is the “iPhone charger” taking a picture of me. See how easy it would be for a camera to be hidden in full view? 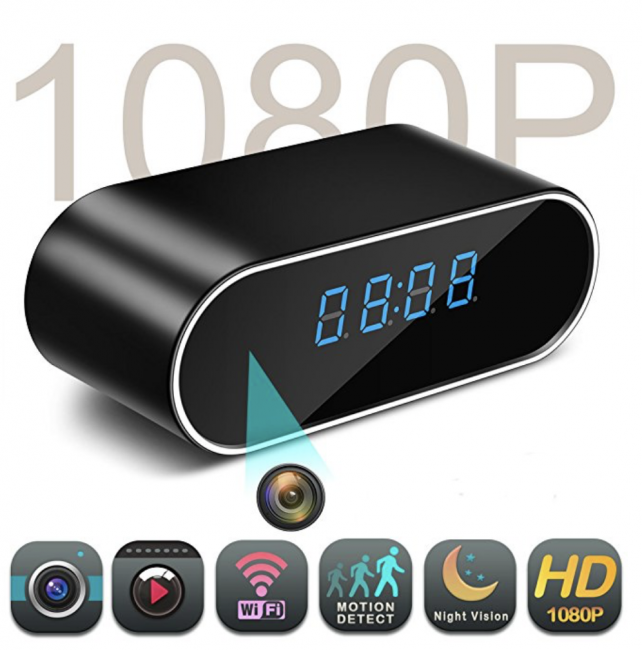 You can even get an alarm clock with a hidden camera. 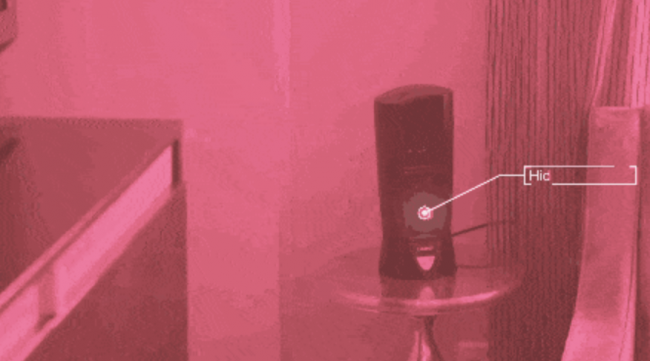 The list goes on and on, but you get the idea. Cameras can be hidden just about anywhere and, unfortunately, there are plenty of sneaky people who are putting them in places you would never expect.

In your own home this isn’t an issue — at least I hope for your sake it isn’t an issue — but what about public spaces or, for example, a hotel room. How do you now some creep hasn’t left a wall adapter or alarm clock whose real purpose is to catch you on camera? Technology is great but, in the wrong hands, it can be used to invade your privacy without you even knowing it. 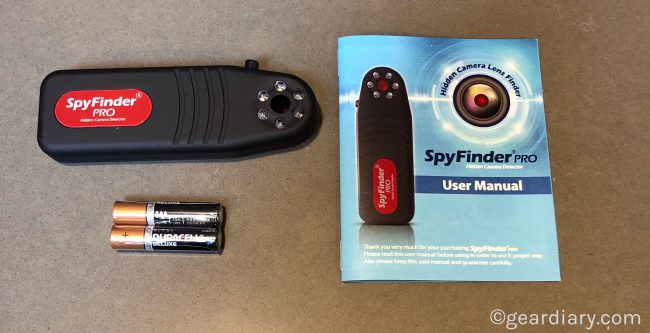 That’s where the SpyFinder Pro comes in. It is 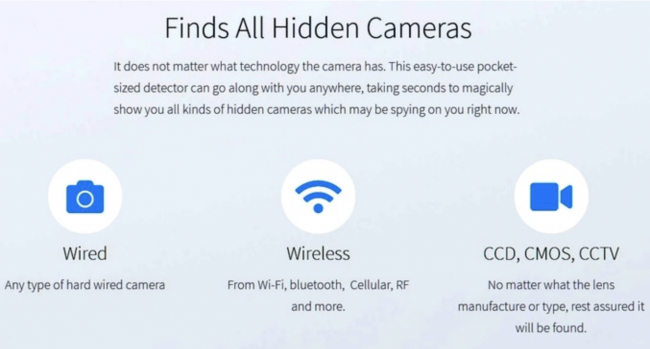 It’s on Kickstarter seeking seed capital for a first run and, after checking it out, I’m happy to report it works.

The SpyFinder Pro comes from SpyAssociates.com, a company that has been manufacturing and selling surveillance and privacy protection products for almost twenty years. Their mission is to give people the tools they need to legally protect themselves using the same technology that wrongdoers use to invade the privacy of others.

The company describes their latest offering this way: 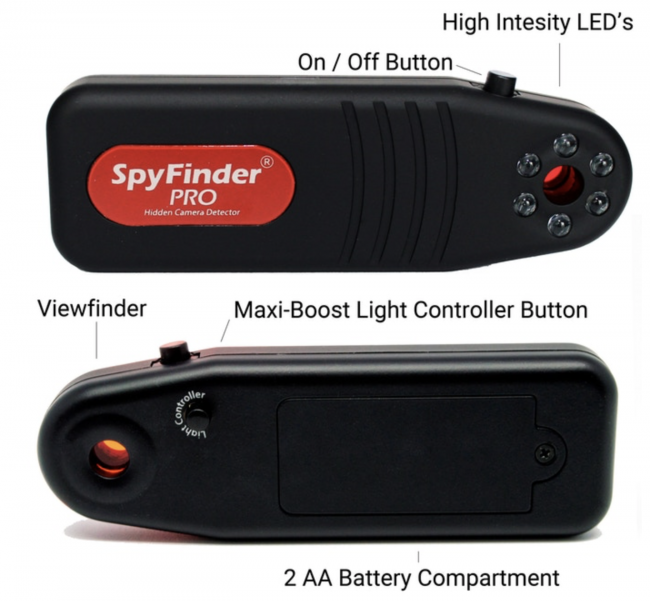 Using the device is simple. After inserting the included batteries (the company includes an awesome mini-screwdriver to open the device), you turn it on with the press of a button. A series of strobe lights begin blinking.

Then, while pointing the strobe lights at the area you want to check, you look through the hole in the SpyFinder Pro and look around. If there is a hidden camera, the strobe lights will reflect off the lens, and you will see a bright dot. It is that easy.

They explain it this way:

When the power button is “pressed” on side of unit, and you look through the viewfinder, it activates six special bright-red LED strobe lights designed to bounce off the smallest of camera lenses. The tiny camera lens will appear to blink back at you as a reflection off camera lens itself , instantly giving away its location as you scan the area around you. It doesn’t matter if the camera is turned on or off, recording or not…even if it’s a non-working camera, the blinking effect will clearly show you the presence of a camera lens which is almost impossible to detect with the naked eye.

The SpyFinder Pro has 3 LED intensity levels that are helpful in locating camera lenses that may be hidden behind a variety of different surfaces. For example, if you are checking a flat wall that is 30 feet away, the highest LED intensity is most effective. If you are checking a semi-reflective shiny surface that is 5 five feet away, the lowest intensity is most effective because it helps prevent false reflections. 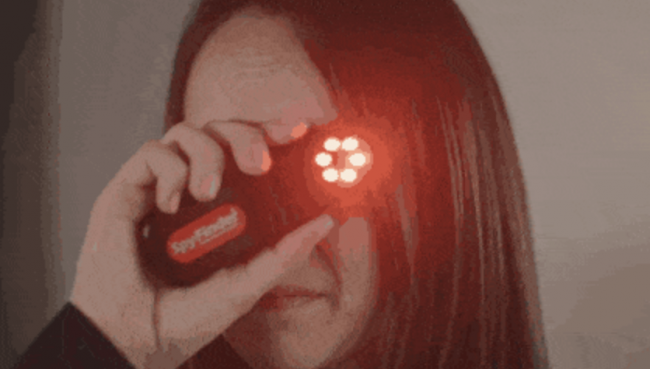 And lest you think this is a product being marketed based on paranoia, the company explains

You won’t believe how small hidden cameras are these days. Often no bigger than a pinhole, these tiny spy cameras are concealed inside everyday objects such as clocks, glasses, lamps, picture frames, USB chargers, keychains, desktop fans, outlets, smoke detectors, DVD players, fake water bottles, air fresheners and so much more. These tiny cameras often are built with advanced recording and offsite streaming, allowing unauthorized people to watch and record your activity, and in many cases, using your compromised activity demanding money or else threaten you with releasing the footage to the public.

Finally, it is worth noting that the SpyFinder PRO won’t find audio recording devices, GPS Trackers, self-recording devices, or alarms. If, however, you want to check for hidden cameras, this is a product worth considering.

The SpyFinder Pro is currently seeking funding on Kickstarter. Check it out here.

Updated 12/01/18: The Kickstarter campaign has successfully closed; you can order yours here.