I recently reviewed iHome’s small Alexa-enabled bedside clock. Raina used it last night for the first time, and this morning reported that she considers it a “winner.” It is, however, a basic smart clock. If you want or need something with more bells and whistles, you can check out the iHome iAVS16 smart Bedside/Home Office Speaker System. 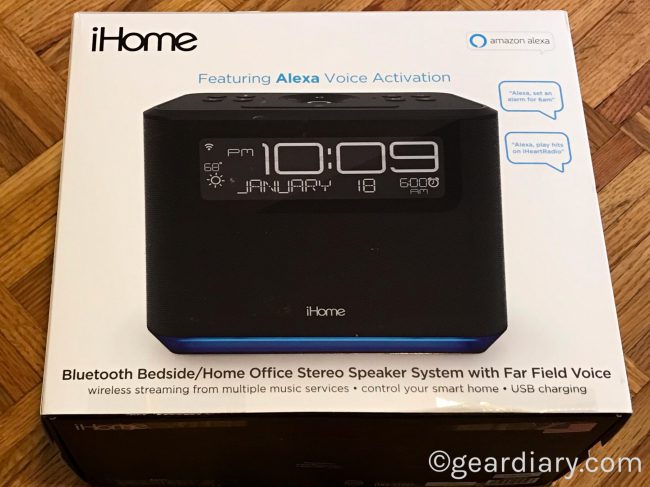 The iHome iAVS16 shares much of the same DNA as its smaller sibling, but for $50 more this $149.99 smart alarm clock takes things to an entirely new level. 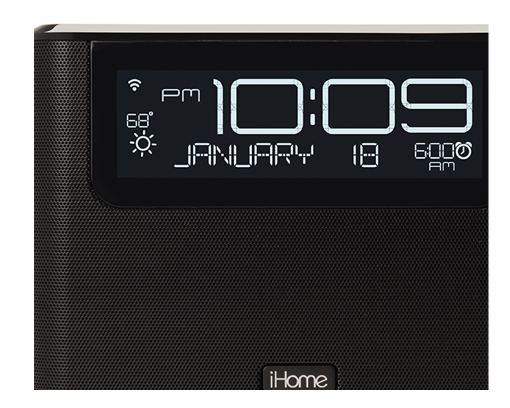 The iAVS16 is a fairly large device measuring 7.45″ W x 5.79″ H x 3.55″ D and weighing just over two and a half pounds. It won’t disappear into the background the way its sibling does but, instead, makes a rather bold statement no matter where it is placed. 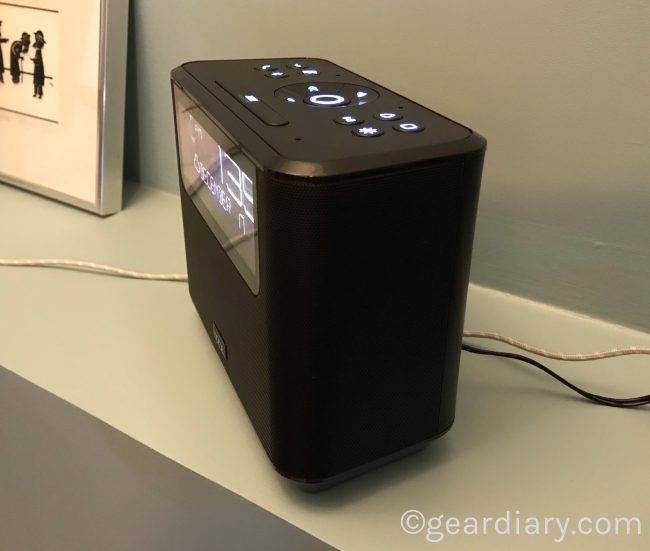 Largely made from plastic, the front and sides of the device are covered in a matte black plastic with countless small holes that allow the sound from the speakers to fill any space in which it is placed. 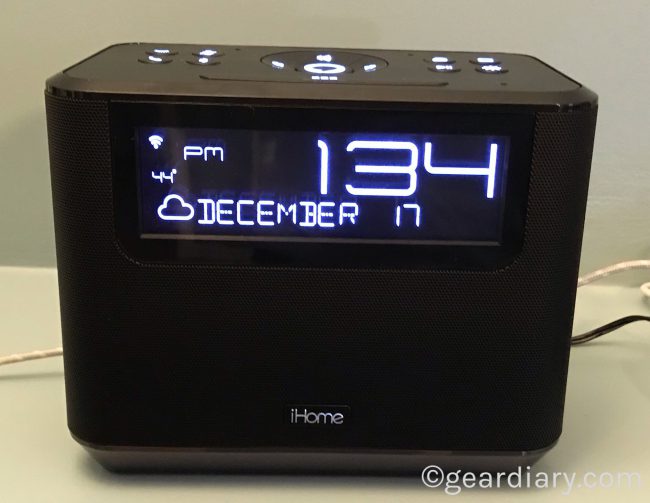 The upper portion of the iAVS16’s front is taken by the digital screen. It lets you see the time, AM or PM, the date, the upcoming alarm and the current weather. It’s an abundant amount of information that makes waking up and getting ready for the day even easier since, at a glance, you know what time it is and how you should dress when heading outside.

The iHome name sits toward the bottom of this front section. I don’t love the obvious logo but, at least, it is small.

The sides of the iAVS16 have the acoustic material but are not otherwise noteworthy. It seems obvious that the speakers reside there, and the material allows the iAVS16 to pump out as much volume as possible.

The back of the device has an input for the included AC adapter, a 2.1 amp USB-A port so you can charge an additional device, and two rear-firing passive radiators. 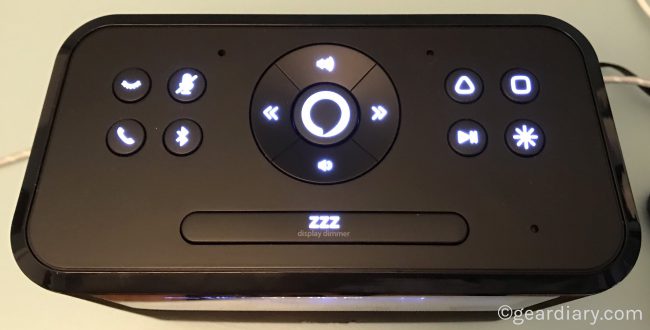 At the top of the device, there are three holes for the far-field microphones upon which Alexa relies, a snooze button that also doubles as a physical control for dimming the screen, and an assortment of buttons.

On the right side (facing the device), there are two programmable smart buttons, a play/pause button for music control and a button to control the accent lighting. More on that in a moment. On the left side, there is a sleep button, a button that turns off Alexa’s monitoring (this is important for privacy sake), a speakerphone button and a Bluetooth pairing button. As if that wasn’t enough, in the center there are volume up and down buttons, forward and repeat buttons for music control and a large button for activating Alexa manually. 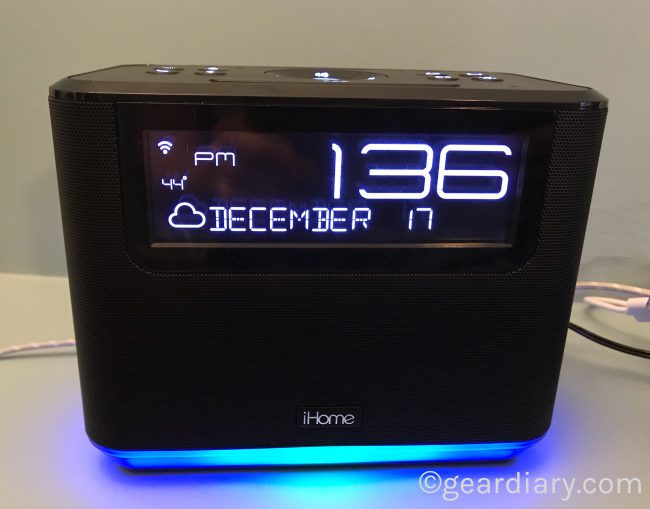 The bottom of the device has a smooth plastic that illuminates. It can not only generate a variety of different colors, but it also provides the familiar illumination when Alexa is activated. This accent lighting is a fun feature, especially since it can produce a rainbow of different colors but I quickly found myself turning it off.

The iAVS16 has Bluetooth. That means you can pair your phone or tablet and stream music or podcasts to it so long as your mobile device is within range.

The integration of Alexa is the big selling feature of the iAVS16. The good news is, it works as expected. They included Amazon Alexa Voice Service (AVS) with Far Field voice capability in a manner that it is fully integrated into the device. You can use your voice to set alarms, change the brightness of the screen and control the volume. You can, of course, also play music, audiobooks, control smart home devices, get weather, news, traffic and more. There are a few limitations to the Alexa integration. For example, use Alexa’s multi-room streaming yet, and Alexa Calling and Messaging is not yet supported. (iHome says this will be added later via a free firmware upgrade.) Despite those limitations, I didn’t find a lot of places where this device fell short compared to the ones directly from Amazon.

The product page currently indicates that support for IFTTT, a smart home platform that can give connected devices even more power and control, is coming soon via a free firmware upgrade. I would usually take such promises with a grain of salt but, until recently, iHome also promised an update that includes Spotify Voice support, Scheduled Display Brightness, and Follow Up Mode. When I went to set up this review sample, I was told there was a firmware update waiting. I downloaded it and, sure enough, these promised features are now part of the device. If they made good on that promise, I have no reason to doubt they will offer a similar update that enables the promised IFTTT control. 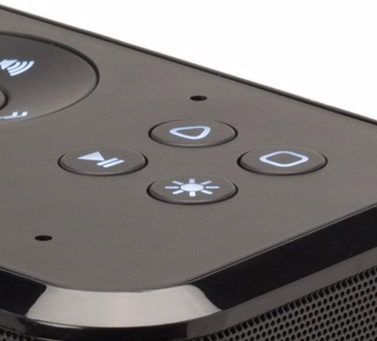 The Smart Buttons are a neat feature. They can be programmed using the free, downloadable app, to trigger pre-set music playlists, activate smart plugs and more. In other words, as much as it is great to be able to use your voice to control your clock and smart home, there are times when it is better, more convenient or, if your partner is sleeping, trigger commands with a silent touch. Having the ability to program two different actions is awesome. I see this as a key selling point since I don’t recall seeing anything similar on other Alexa-enabled devices.

The fact that the iAVS16 is Alexa-enabled means it has WiFi built in. That connectivity also means you can stream music from services such as Spotify, Pandora, iHeartRadio, Amazon Music & more.

The free iHome Control app lets you take even more control over the device. It is,

…the perfect way to control your iHome SmartPlug right from your Android or iOS device, from virtually anywhere in the world from your phone or tablet.

You will also need the free iHome AVS app when first setting up the device. As I wrote in my previous review, the setup process takes a few minutes but, so long as you have the iHome app and Amazon’s Alexa App and are logged into your Alexa account, the app makes the process simple.

The iAVS16 is an impressive device that packs a lot of functionality into a fairly small device. No, it is not so small that it will disappear into the background, but this one device is an alarm clock, a Bluetooth speaker system, a WiFi music streaming device and an Alexa device. All of that would take up far more space, and cost significantly more if you were purchasing individual devices.

I’m a fan of the iHome iAVS16. It works well as a bedside or desktop alarm clock. It doesn’t provide audio that will satisfy those who truly value great sound, but it gets the job done as a small Bluetooth speaker. Its display provides a good deal of important information without being overwhelming. And the Alexa integration works well. I do wish I could change the word used to trigger voice control from “Alexa” to one of the other options now available on Amazon’s Echo devices, but that it a limitation Amazon imposes rather than a choice iHome made. With that one small caveat, the iAVS16 works well if you want to add Alexa control to a room. Finally, I love the fact that iHome has already made good on at least one of their promised updates and I look forward to seeing what they do in the future.

The iHome iAVS16 is a good device. It delivers on its promises and is ideal for someone just stepping into the world of Alexa and is a fantastic device for a college dorm room. With one device, your favorite college student can make sure they are up in time for class, control their music by voice and, considering how small some dorm rooms are, save a ton of space. It is a product worth your consideration. Check it out here.

What I Like: Bright but dimmable display; Decent sound; Bluetooth and WiFi Audi streaming from numerous services; Alexa integration works well; Accent light for those who like such things; 2.1 amp USB charging port at the back; Can service as a speakerphone; iHome has already made good on one promised update

What Needs Improvement: The accent light is annoying within a few minutes of use; Audio is good but not great; Some limitations when it comes to Alexa integration