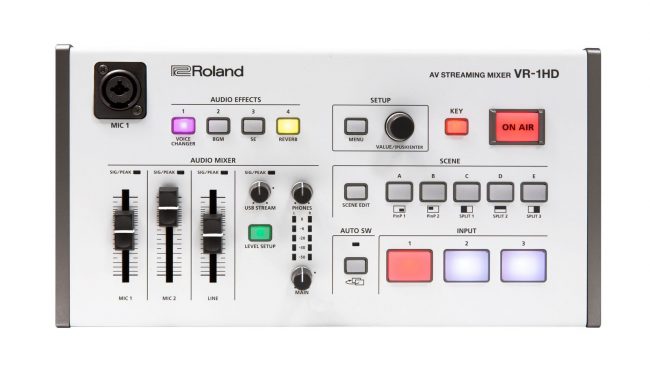 With the solid audio and video quality of modern smartphones, there isn’t much else anyone needs to stream live … unless you want multiple cameras and true professional quality. Enter the Roland VR-1HD, a mixer for dynamic multi-camera broadcasting to bring your live streaming videos to life.

Designed for content creators who want to provide video and sound that outperforms smartphones or webcams, the VR-1HD will be available in Q2 2019 at Roland retail partners.

From the press release:

Connect, switch and stream cameras, presentations, game play, smartphones and tablets with VR-1HD’s “worry-free” HDMI inputs. Each of the three inputs accepts HD and computer video resolutions for audio that can be easily mixed with two-studio quality XLR microphone inputs and line input. The mixer allows users to go hands-free and headset-free while live streaming with a top mounted mic input, so creators can use a goose neck microphone and easily operate the VR-1HD with dedicated controls.

VR-1HD’s video editing software provides users with its Scene Switching functionality, allowing them to instantly switch between ‘scenes’ with effortless transitions for a professional finish. The mixer lets creators preset up to five scenes that they can later use while live streaming videos and performances. 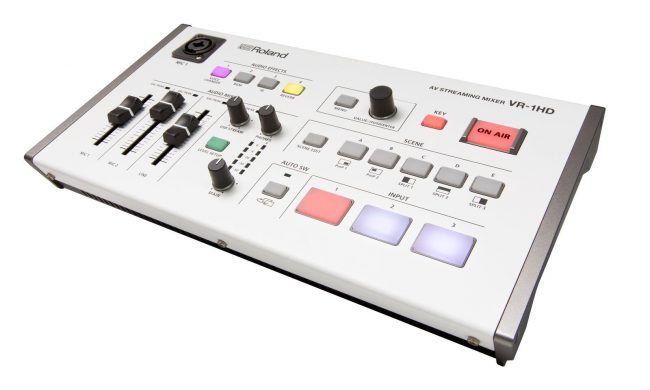 Some of the coolest new features are the auto switching technologies, allowing you to set things up in advance to minimize the need to interact with the hardware during a performance – meaning you can focus on creating the content!

• Video Follows Audio: Provides users with the capability to switch cameras based on who is speaking into the microphone. If both participants speak, or remain silent at once, the VR-1HD can switch to a wide shot capturing both performers.
• Beat Sync Switching: Listens to the tempo of a performance and automatically selects which camera inputs to switch between.
• Auto Scan: Best used for extended live streams with no operators, Auto Scan gives users the ability to pre-set a specific time for switching between sources.
Users can take advantage of preset sound effects, jingles and theme songs and more assignable to Audio Effects buttons, to play during a video or performance.

Here are just some of the VR-1HD Features:

• Three HDMI inputs that accept HD and computer video resolutions
• Two-studio quality XLR microphone inputs and line input
• Mic input for a goose neck microphone making it easy for hands-free and headset-free
performances
• Scene switching functionality, with five pre-set scenes that can be included in any live
stream
• Audio Effects functionality allows sound effects, jingles and theme songs in
videos/performances
• Auto Switching modes make it easy to put on a one-person show
• Functions as its own audio engineer with automatic mixing functions and built-in
“equalizers”, “gates” and “compressors” to balance out changes in volume when
speaking or singing to ensure professional sound performance
• Voice Changer effect from Roland’s VT series of Voice Transformers can instantly
transform any performer’s sound
• Stream performances and presentations easily through a computer’s USB 3.0 ports