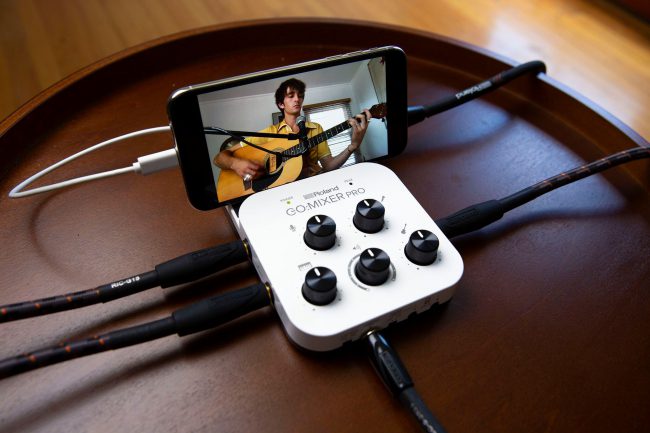 I’ve long been an advocate for making music on the Apple iPad – to me it has been a key reason to always have one by my side. But while it is a great device to allow for chaining up synthesizers and recording occasional audio one track at a time, that has been pretty much the end – until now.

Roland has released the GO:MIXER Pro, a 9-in / 2-out line mixer that will let you record your entire group (including a microphone with +48V phantom power) at once into your smartphone or tablet, all powered over USB. 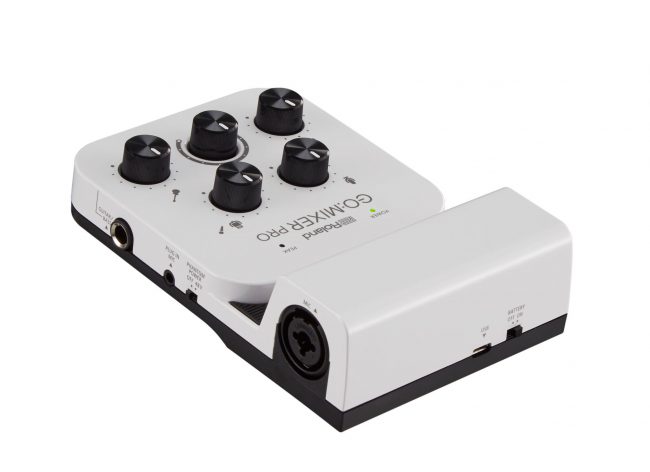 Here are the specs:

– The ultimate hardware audio device for smartphone content creators, combining multi-channel mixing, sound monitoring, and more in one affordable, palm-sized device.
– Creators can connect and mix up to nine audio sources at once, dedicated controls provide easy volume adjustment, and the resulting stereo digital audio output is sent straight to the user’s smartphone for capturing in a video or audio app.
– Powered by the smartphone connection or via four AAA-size batteries
– A headphones output with level control is also provided for monitoring the mix and listening to backing audio from the smartphone while performing.
– A Center Cancel function is available as well, enabling users to create karaoke-style tracks on the fly.
– Loopback function lets users back-track recordings.
– When it’s not being used to capture content on a mobile device, GO:MIXER PRO doubles as a standalone battery-powered mixer for practice and on-the-go performing.
– Works with Roland’s Virtual Stage Camera and the 4XCAMERA 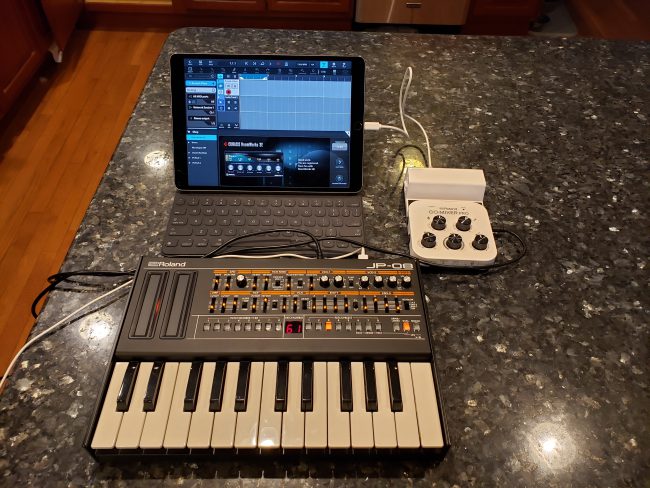 Getting your sound into the GO:MIXER Pro is simple – here are all the inputs:

With so many options, I found myself easily able to connect all of my gear – from 35+-year-old pro instruments through modern hobbyist tech, Roland has all the bases covered.

In terms of output, things are limited to stereo outputs rather than a true multi-track interface, but that is exactly in keeping with the primary function of the mixer. which is for the on-the-go recording of performances, jam sessions or demo recordings.

All of these connections are packed into a device barely bigger than a phone and sits comfortably alongside my iPad and Roland Boutique synths as shown in the picture above. But if you want to go even more portable, between the trim pots and the battery case there is a slip-resistant area to rest your phone that is incredibly useful because it is a stand but also positions the phone perfectly for easy interaction without taking your eyes off the screen.

Operating the GO:MIXER Pro is incredibly simple: I found the labeling of the inputs simple to figure out, the sound adjustments were linear and predictable, and if all you want to do is mix a few instruments into your tablet you can just plus the Lightning cable into the output of the mixer and record away.

But the GO:MIXER Pro lets you go further. If you are looking to sing along with a backing track (or perform karaoke), there is a ‘Center Cancel’ switch to block the vocal channel (in most cases, anyway).

There is also a loop back function, which Roland describes this way:

Basically, Loop Back allows you to mix whatever is coming from the audio out of your device along with the output of the GO:MIXER Pro. While the obvious use is to record a lead vocal or instrument against a backing track from your smartphone, it also allows you to blend and mix a variety of tracks without having to playback from external devices. A pretty solid feature from this small package. 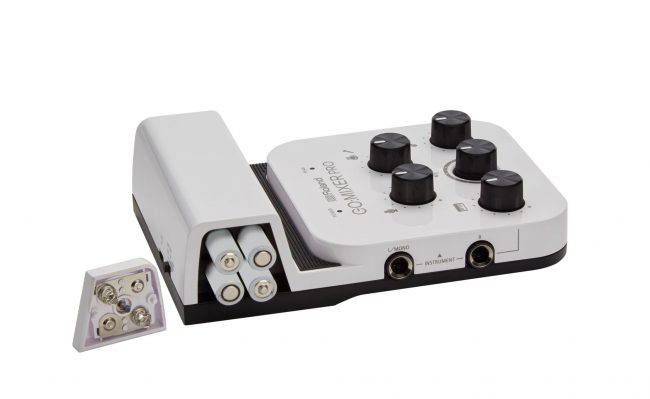 More important than the sheer number of inputs and outputs and little switches is how the device sounds – and the Roland GO:MIXER Pro sounds incredible! I have played with other devices that compete in the ‘smartphone accessory’ space, and all of them left me checking my cables for ground loops and noise sources … and while perhaps that is overstating things a bit, the Roland is the first audio device for my iPad that feels like a true pro audio interface and not just a hobbyist toy.

One question I had as I started working with the GO:MIXER Pro was “is this thing worth paying more than my current Mackie portable mixer?” And the answer is (as always) “it depends”. First, Mackie requires a 110V power source; second, it is not designed around interfacing with portable devices; but regardless of those, I found that the sound quality is every bit as good on a qualitative level.

And that is the bottom line – this is NOT a toy. This is a solid built, well-designed tool for musicians to take with them and record things that would be suitable for sharing with others to proudly represent their work. I would have no problem recommending this as a main portable mixer for musicians, and using the GO:MIXER Pro has shifted more of my music creation time to the iPad, where I can use the battery-powered JP-03 to plug in and record into my iPad. It is fun, but it is also highly productive and gives me better sound quality than my full analog audio studio used to produce.

The Roland GO:MIXER Pro has a list price of $169.99, and is available through Roland or at music retailers everywhere.

What I Like: Loaded with capability for a low price; Self-evident use; 9 inputs capable of just about everything; Clean stereo outputs