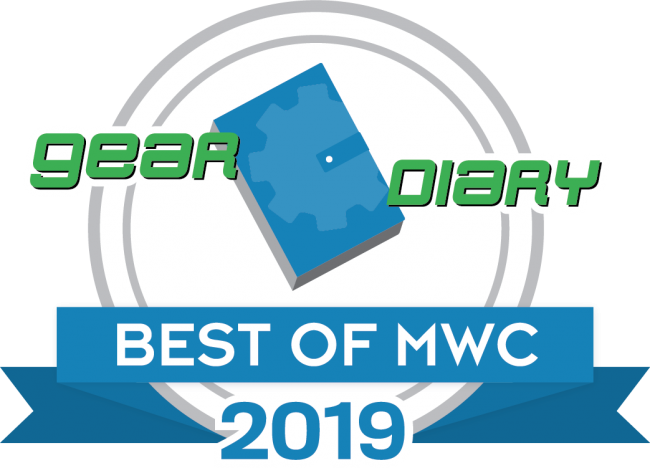 Mobile World Congress has just wrapped up, and wow — it was a doozy. So many new devices were announced, and there was never a dull moment. We were in Barcelona for the event, and it was tough knowing that we could only pick 10 for our ‘best of’, but here they are — Gear Diary’s Best of Mobile World Congress 2019! 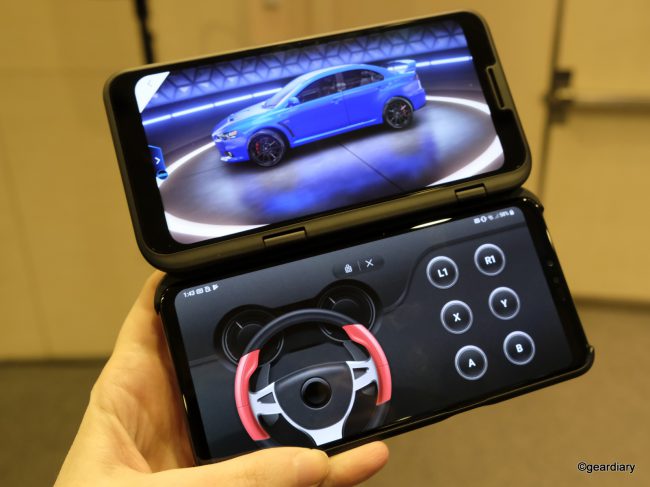 Phones with folding displays caused a lot of buzz this week, but there was a simpler, less expensive, and more practical (for now at least) solution introduced. The new LG V50 ThinQ is a great 5G phone on its own, but the new Dual Screen case takes it to a whole new level. LG believes that foldables are the future, and the day will come when we all have them. At that time, native apps in the app store will scale and work properly on any size screen. But that is not how things are just yet. By making this a dual screen case versus one large folding screen, you’ll still have the proper screen ratio so that all apps work until the apps have caught up with the folding screen sizes and the technology has become less expensive. You can learn more about the LG V50 ThinQ at LG.com.

The Lenovo Tab V7 is ideal for someone who doesn’t want the expense (or the juggling act) of carrying a phone and a tablet. It blurs the line between the two categories. This device will have people wondering if it is a phone or a tablet. The truth is, it is both. It can be viewed as a huge 7” phone, or it can be seen as a small, 7” tablet. It won’t be for everyone but, for someone who wants to carry one device, it just might be ideal. Priced at just €249, the Tab V7 is incredibly affordable while being the perfect solution for someone who only wants to carry one device. 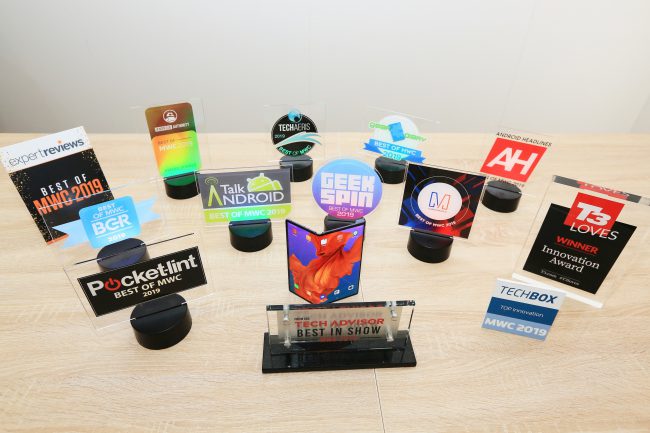 We’ve been hearing about folding screens being part of the future for some time, but this is the year when they have finally burst into the mainstream. The Huawei Mate X employs what they are calling a “falcon wing hinge design” which has an outside curvature putting the large folding screen on the outside of the device rather than on the inside. When unfolded, you’ll have a glorious 8? FullView display with an 8:7.1 aspect ratio and 2480×2200 resolution. When you have the Mate X folded in its more compact half-size, it has a 6.6? display with a 1.95:9 aspect ratio and 2480×1148 resolution. When unfolded, the Mate X has an impressively thin 5.4 thickness; when folded, the Mate X is just 11mm thick. Compare that to the Samsung Galaxy Fold which measures 6.9mm when unfolded and 17mm thick when folded. Of course, being on the cutting edge of technology doesn’t come cheap: The Huawei Mate X will sell for later this year for €2299. If you can’t wait to take part in the foldable screen future, your time is coming. 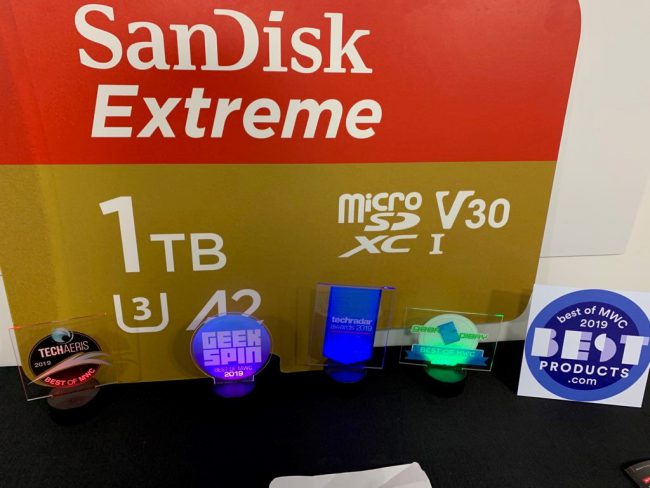 There was a time when a 1GB microSD card seemed like an impossible number. Reflect on that for just a moment, and then consider that SanDisk has gone and done the impossible again; they have somehow crammed 1 TERABYTE onto a memory card the size of a pinky nail. That means your phone, action camera, or drone will now have enough memory that you will never have to worry about shuffling video, photos, or files off before you can load it with new data. But that’s not all. The new SanDisk 1TB microSD card is also fast: “Designed to help move tons of high-quality content faster than ever, the 1TB SanDisk Extreme UHS-I microSD card reaches speeds up to 160MB/s. This new card allows consumers to transfer files in nearly half the time over standard UHS-I microSD cards currently on the market.” You’ll be able to buy yours soon for $449.99. The future is now, and we can’t wait. You can learn more and reserve yours here.

One of the worst things about the digital zoom feature on every mobile phone is that it degrades the photo you’re taking when you use it — pretty much to the point where you would take a better photo if you took it full-sized and cropped down around what you’re trying to feature, but Oppo may have just ended that. Oppo has somehow managed to pack a 10x lossless optical zoom into a smartphone camera (!!), and the result is breathtaking. We saw a prototype at MWC, but Oppo is saying that they will have devices later this year featuring the new technology. We can’t wait! 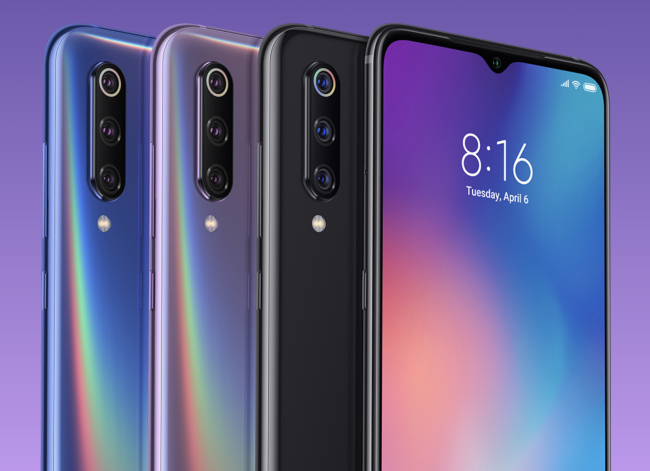 5G is coming, and in many ways, it was the star of MWC this year. One thing most 5G phones have in common is that they will be expensive, but there was one that really caught our eye: The Xiaomi Mi 9 will have a gracefully curved holographic glass design, a 48MP Sony camera, a Qualcomm Snapdragon 855Hyper-flagship processor, a sapphire glass camera lens cover, a 90.7% screen to body ratio with a Samsung AMOLED display, 20W fast wireless charging, and all of that will cost just €449. Wow. 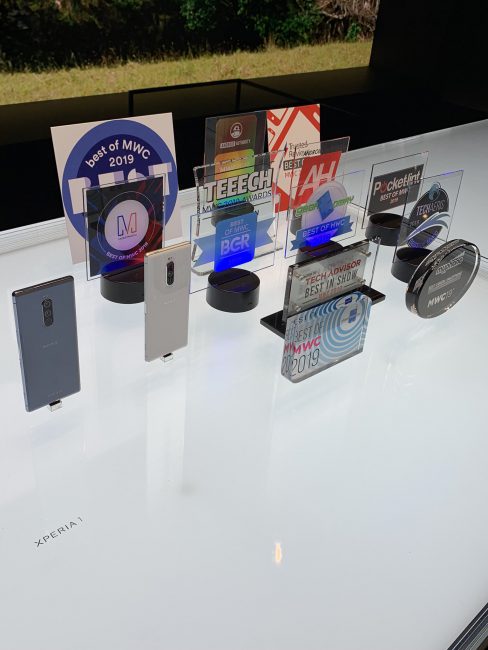 Dan and I have long been Sony Xperia fans, and the Sony Xperia 1 looks to be a worthy flagship. The Xperia 1 is the first 4K OLED smartphone with a 21:9 CinemaWide display. Measuring 6.5”, it has a big display and, thanks to the inclusion of HDR remastering technologies, it promises to look fantastic. But, the screen isn’t the only first that can be claimed by the Xperia 1. According to Sony, the phone also has the “world’s first Eye AF in a smartphone with triple lens camera and up to 10 fps burst shooting with AF/AE tracking for precision focus and exposure.” The Xperia 1 will be available in Black, Purple, Gray, and White, although Black and Purple are exclusive to the U.S. It will ship with Android 9.0 Pie and will be available in the U.S. late Spring 2019. 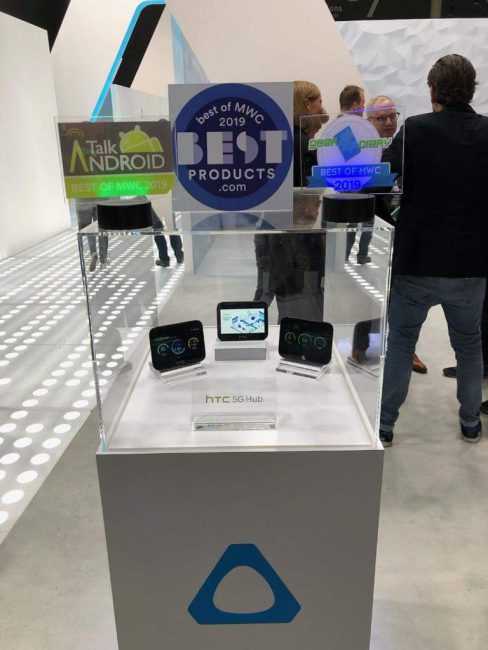 The new HTC 5G Mobile Smart Hub is effectively a 5G hotspot that allows people using various devices to all get on speedy 5G networks anywhere they are available. That means people who don’t have a phone or tablet with 5G built-in can still access the new, super-speedy connectivity that is rolling out. The HTC 5G Hub is more than just a super fast hotspot device. It has a 5” HD touchscreen making it easy to set up and configure and a large enough battery to keep the fast network connections going and going. It is a great idea that has the potential to make 5G speeds accessible to more people more quickly. Why does that matter? Simple, 5G speeds are dramatically faster than 4G LTE networks, but it will take some time before phones and tablets with built-in 5G speeds become commonplace. You can learn more here. 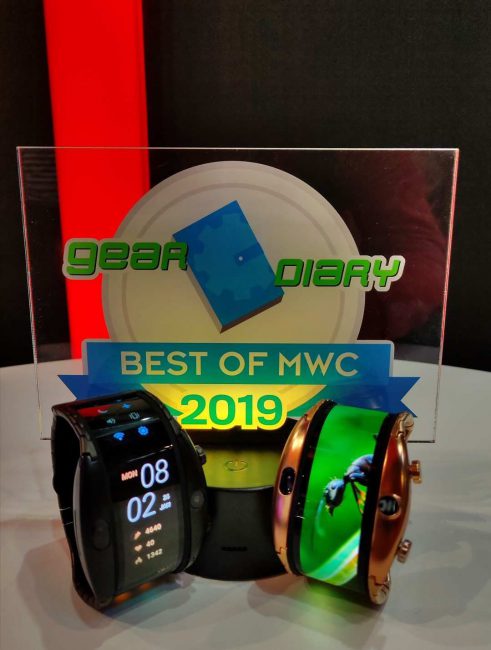 The future is here with the nubia Alpha which has a flexible phone, not a foldable one. It’s a 4? screen that wraps around your wrist, so it’s basically a really big smartwatch or a somewhat smaller phone, depending on how you consider it. But think about it like this: you can easily text, check your email, make calls, etc, like you’re Dick Tracy, and you won’t have to squint or scream at Siri as you do on an Apple Watch. Look for the Alpha later this year for €449-649 (there will be a Bluetooth and eSIM model, hence the two prices).

Did you keep up with the news from Mobile World Congress? If so, what were your favorite new devices?