If you’ve wanted a capable under $300 Android tablet that also doubles as an Alexa display, you’re going to love the Lenovo Smart Tab P10 2-in-1 Smart Dock. It’s an Amazon Alexa enabled device with a 10.1″ FHD screen, but you can pull the display from the dock and use it separately as a regular Android tablet, too. 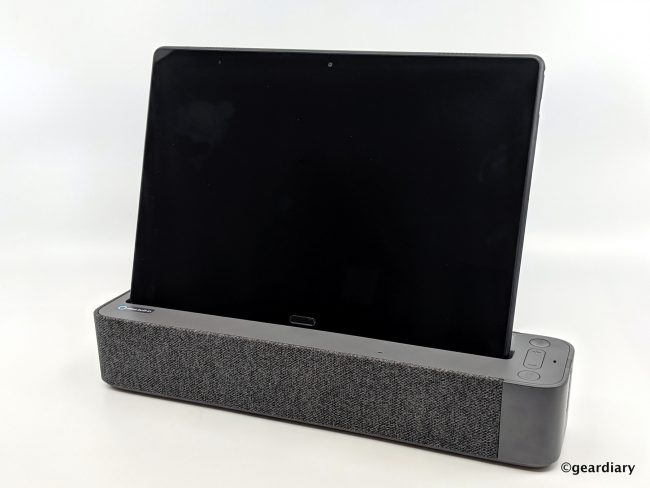 Perfect for just about any room in your house, the Lenovo Smart Tab P10 can operate as a family hub in the kitchen or a heads-up smart display on your office desk. It’s available in two versions, 3GB RAM and 32GB user memory or the 4GB RAM and 64GB user memory I was sent.

Inside the box, you’ll find the P10 tablet, the Smart Dock, a wall charger, a Type-A to Type-C USB charger (for when you need to charge the tablet and you aren’t near the dock), a quick start guide (with safety and warranty information inside), and a SIM pin (for adding a memory card). 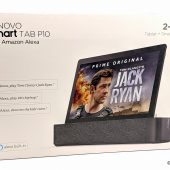 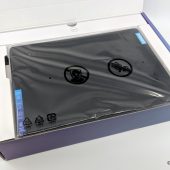 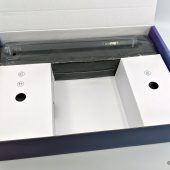 The tablet has a glass front and back with an aluminum band around the middle. The result is a device that looks and feels pretty slick — so use two hands, because you don’t want to drop it!! 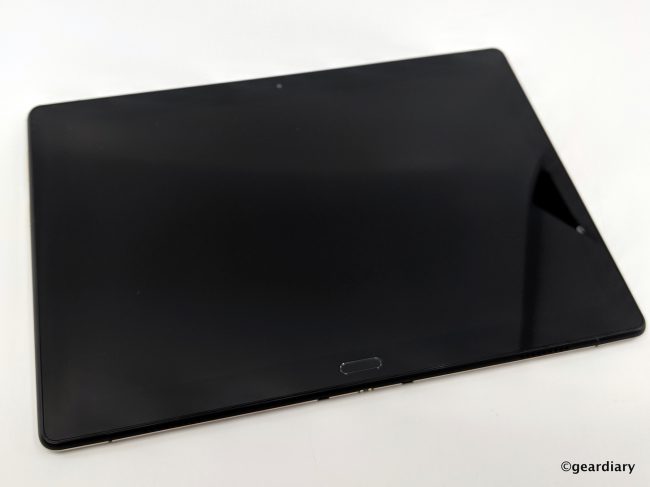 On the bottom of the tablet, there are two front-facing Dolby Atmos speakers on either side of the two pins in the center that are for connecting and charging in the Smart Dock.

On the right side, there is a memory card tray (opened with the SIM pin), a microphone, and a Type C charging port. 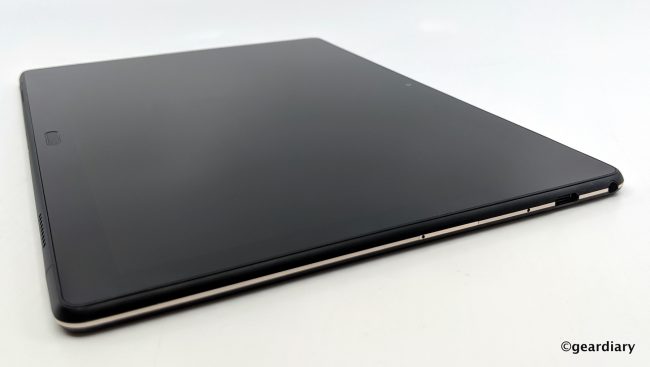 On top of the tablet, there are two front-facing Dolby Atmos speakers.

On the left side, there is a power button and a volume rocker. 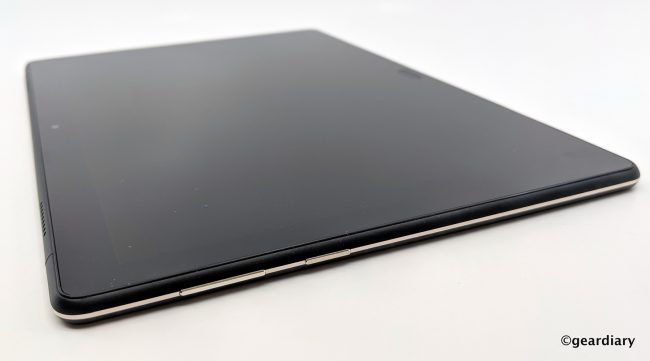 On the back, there is an 8-megapixel camera and an LED flash. 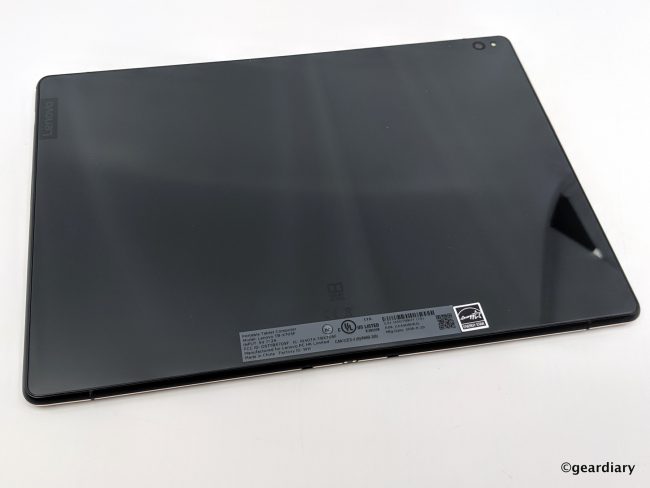 Setting up the tablet is the usual Android process. You’ll need to enter your Gmail address and you’ll be offered the chance to restore from a previous Android tablet backup, iOS backup, or to start fresh. I opted to start fresh, as I don’t need all of my regular apps on a tablet that probably won’t leave home.

This is the Smart Dock; it measures 11.25″ long by 2″ tall by 2.5″ deep. It’s composed of gray plastic with a gray cloth wrapper on three sides. On the top of the dock, there is a Bluetooth pairing button, a volume rocker, and a Mute button for when you don’t want Alexa listening. The three small dashes you see on the right side are far-field microphones. 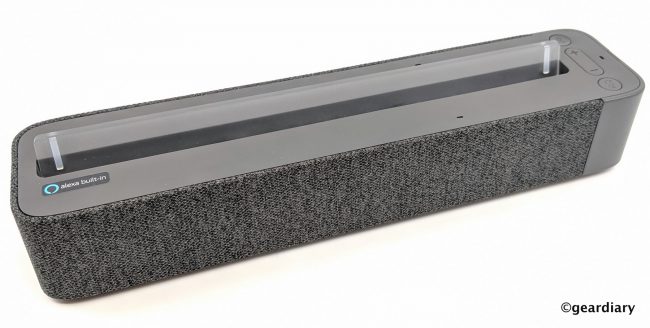 The Smart Dock has a kickstand on the bottom that gives the tablet added stability. 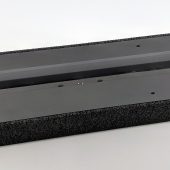 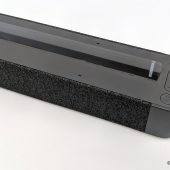 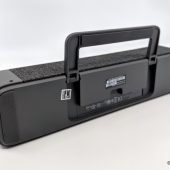 There are two rubber grips on the bottom to keep the dock from scooting. 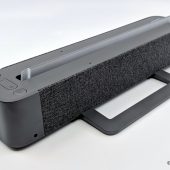 And here’s the tablet inserted in the Smart Dock. When you put it in, assuming you’ve properly seated the pins, you’ll hear a confirmation buzz. 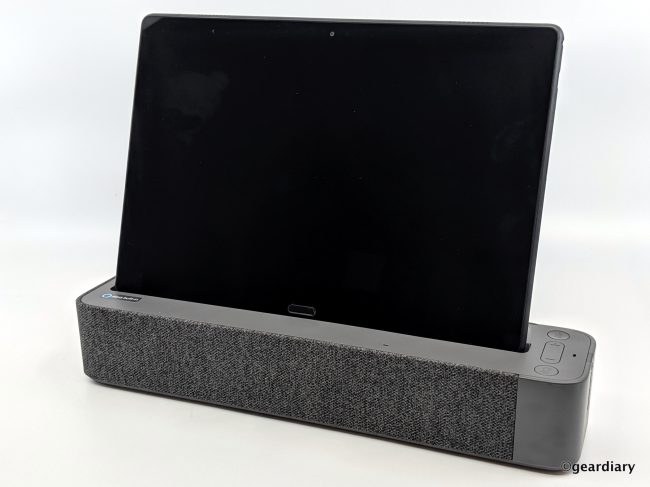 And here’s a view from the side. 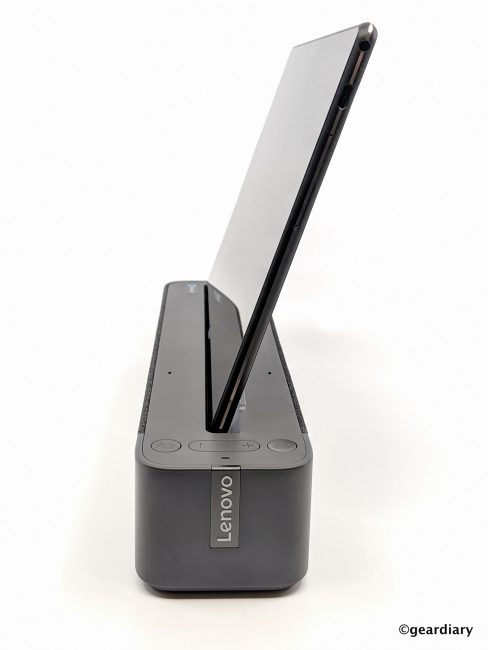 The Amazon Alexa setup itself is simple … 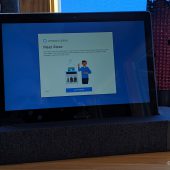 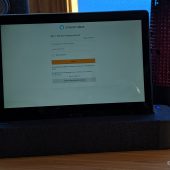 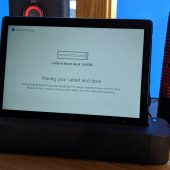 Press the Bluetooth button with the tablet inserted in the dock, then follow the prompts to pair. Done!

But you’ll have to download some apps that correspond with commands you might want to give the system. For instance, my Spotify account is tied to my Alexa account. I can access it from other smart speakers without needing anything extra, but I had to download the Spotify app to the tablet for it to work here. It’s not a huge PITA, but it is an extra step.

What you now have is a huge display on an exceptionally clear speaker that will show you the weather, respond to your Alexa questions, play your favorite music, let you watch streaming video from all of your favorite accounts, let you listen to your Audible books, and most importantly, control all of your smart home devices that any other Echo device would handle. While the sound produced is clear and lovely, there isn’t a lot of bass; in other words, it works really well for what it is, but you shouldn’t expect the dock to replace a higher-end Bluetooth speaker with room-filling sound.

The far-field microphones are exceptional; I was using another Alexa-enabled speaker in my office that I had to speak clearly and expressly to, but the Smart Dock hears and understands me well from across the room. 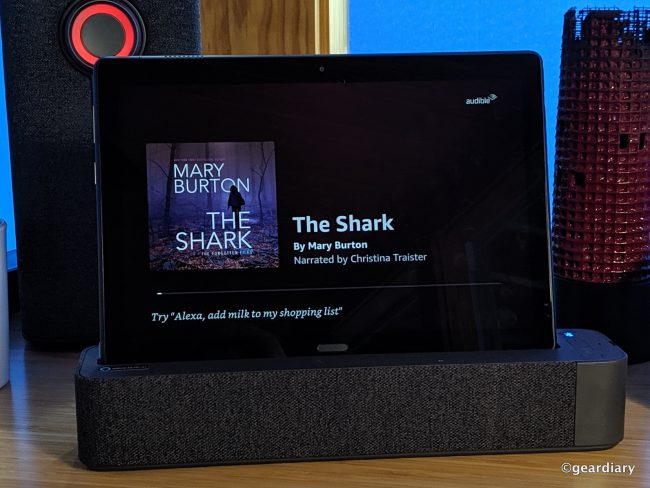 The only failing I can find is that when the tablet isn’t in the dock, you can say “Alexa … [command],” and two beeps will sound, but the brains of the operation have basically been removed, and nothing will happen past that. All this to say that the dock needs the tablet to be functional, so if you are removing the display to use as a tablet and you’ve left home with it, no one else will be able to access Alexa until you bring the tablet back.

It’s hard to believe that for $299 you’re getting a better than average 10″ Android tablet, but adding the Smart Dock makes this package a no-brainer. If you need to save a bit of money, and you don’t mind losing the Dolby sound, there’s also a less-premium M10 version available. Long story short, if you’ve been holding out for an Alexa-enabled smart display, but nothing has really wowed you yet, you should check it out!

The Lenovo Smart Tab P10 2-in-1 Smart Dock retails for $299.99, and it is available directly from Lenovo and from other retailers including Amazon [affiliate link].

What I Like: Easy setup: Excellent sound; Large 10.1″ screen shows Alexa commands and content when in the dock; When the tablet is in the dock, you get excellent sound for streaming video and music; When not in the dock, it’s a great 10″ Android tablet; the price!

What Needs Improvement: You can’t use the Smart Dock on its own as an Alexa-enabled speaker