Logitech describes their new Logitech Zone Wireless as being, a “wireless Bluetooth headset designed to control your acoustic environment and get stuff done in open workspaces.” In lay terms, the new headset is designed for people who work in open offices or who need to make and take a lot of calls during the day. Is the new headset worth the $199.99 for the Zone Wireless?” Let’s take a look? 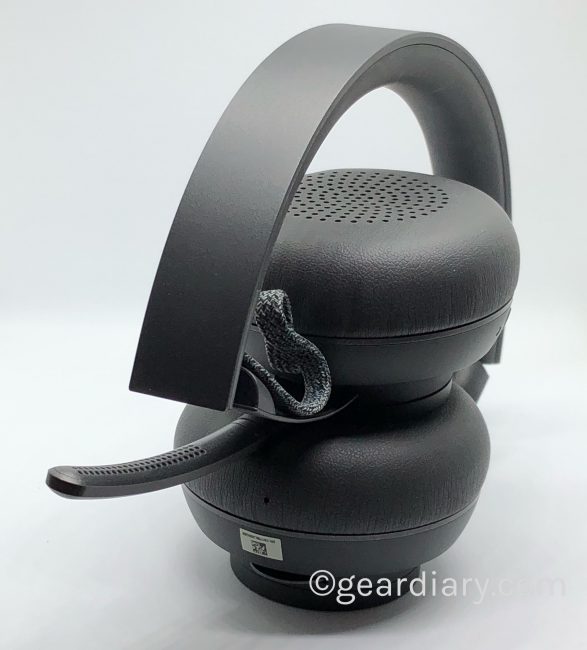 ELEVATE YOUR OPEN OFFICE: Open workspaces are great for collaboration, but they can also be noisy. Take control of your acoustic environment with Zone Wireless, the Bluetooth headset specifically designed for busy workspaces. Connect it simultaneously to your smartphone and computer. Great for talking, immersive for music, and active noise cancellation for when you need to concentrate. 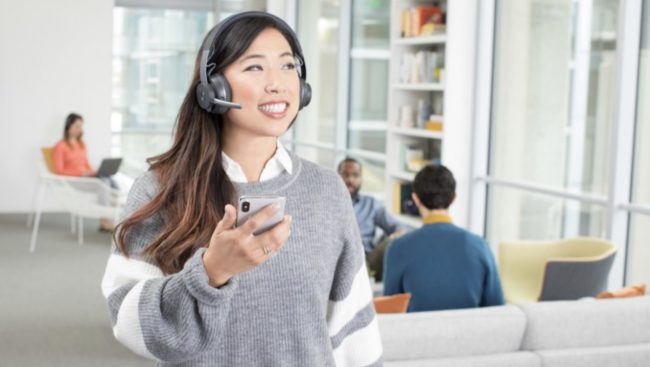 Logitech’s own advertising makes clear the intended audience for this headset. It works well for music, but it isn’t targeted toward audiophiles. It works well if you are making calls, but it isn’t intended for people who are looking to chit chat. It does a fine job for both these purposes, but those aren’t how this headset is being marketed. Instead, the Logitech Zone Wireless is specifically targeted to people who need to focus in an environment that isn’t conducive to quiet contemplation or conversations. 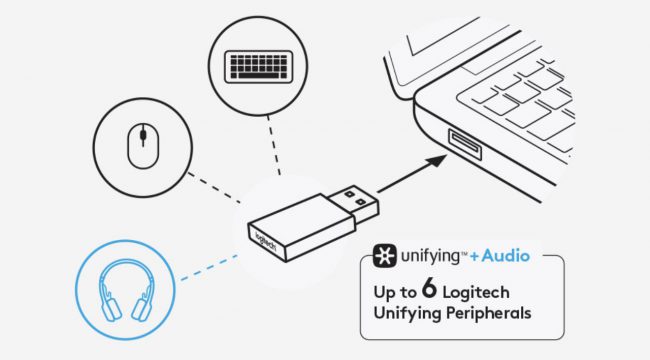 As they put it:

Seamlessly switch between smartphone and computer Great for music. Great for active collaboration. Zone Plus (available later this summer) connects additional Unifying peripherals with one receiver.

Inside the simple brown box, I found the wireless headset, the USB-A dongle, a charging cable, a cheap travel bag, and some documentation. 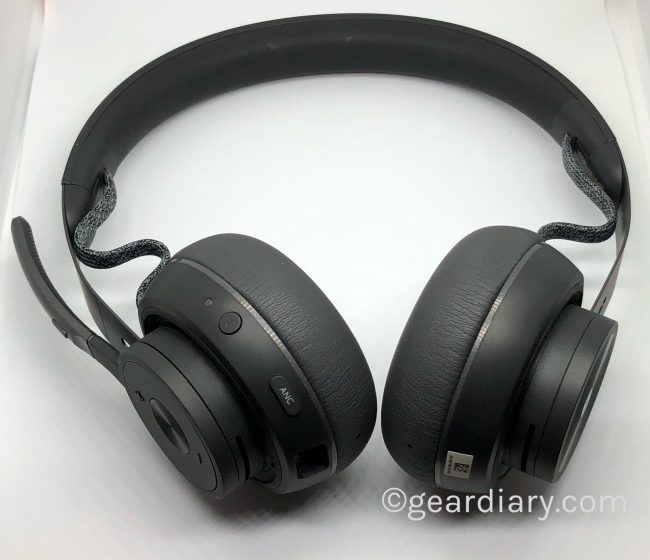 At just 6.38oz, I was surprised by how light the headset is. The company used a combination of metal and plastic to keep it light but durable. It weighs next to nothing but feels substantial enough to put up with the daily use and abuse it is likely going to encounter in an office environment. 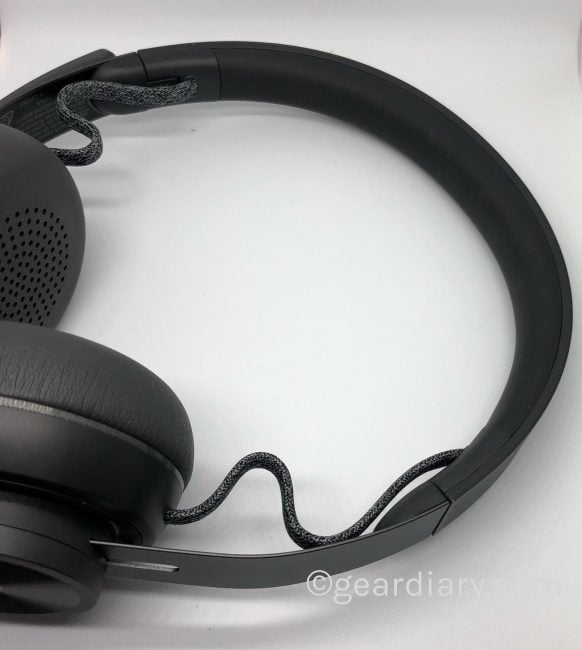 The headband is thin but has enough padding on the underside to keep it comfortable while wearing for extended periods. 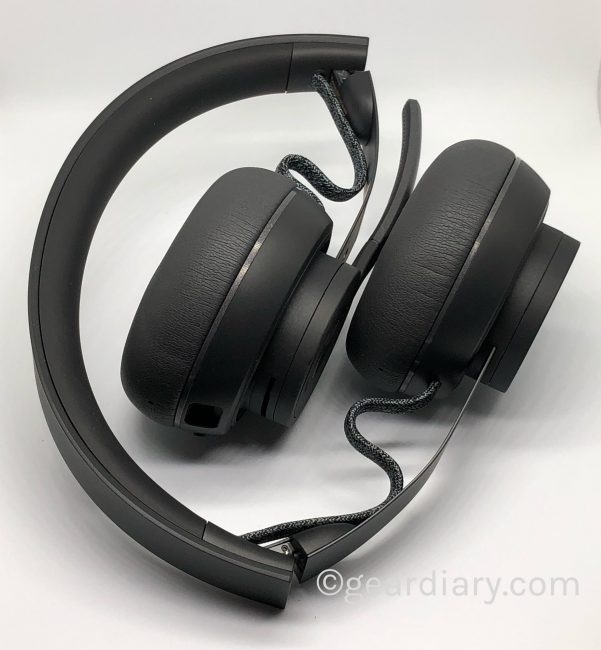 The collapsible design results in a small package that is easy to throw in your bag. The hinge feels fairly strong and locks into the open position with a satisfying click. An exposed wire connects the two earcups and is hidden as it passes through the headband from one side to the other. 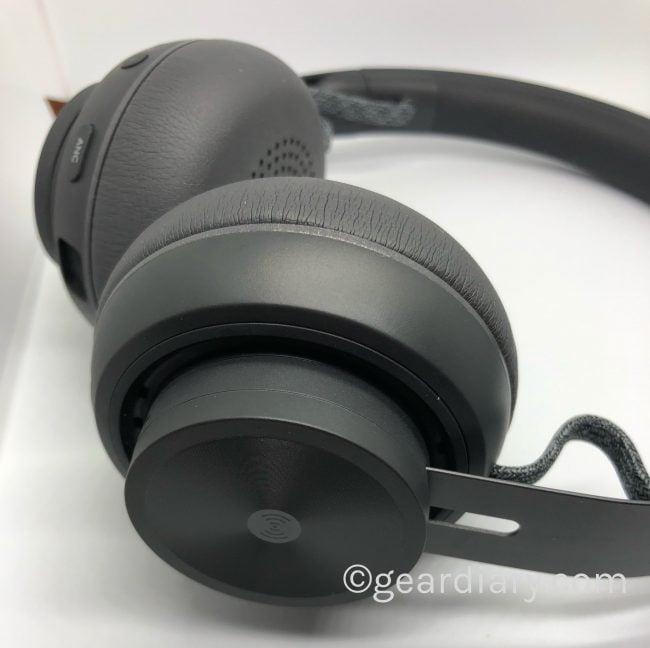 The right ear cup seems to have no controls or anything worthy of note. This isn’t actually the case, however, since this side of the headset has Qi wireless charging built into it, and the charging receiver is embedded in this ear cup. More on that in a moment. 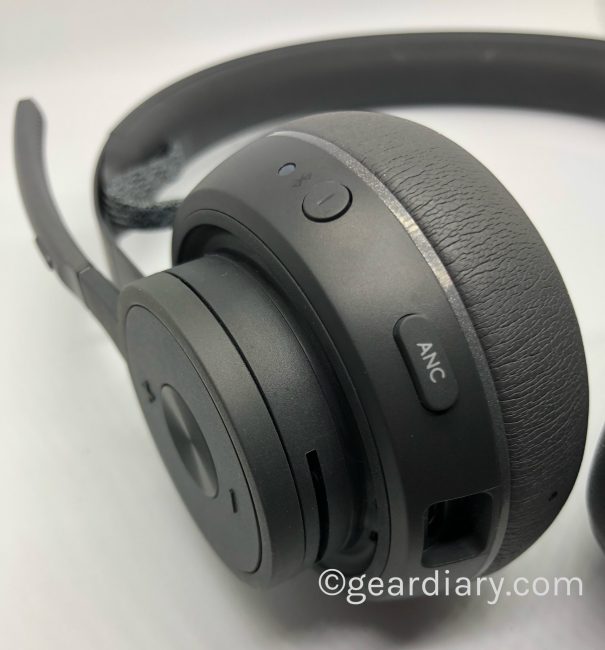 The left ear cup has a good deal more going on. There is a micro USB charging port if you opt not to use the Qi wireless charging, a button to control the Active Noise Cancellation, and a power/pairing button. 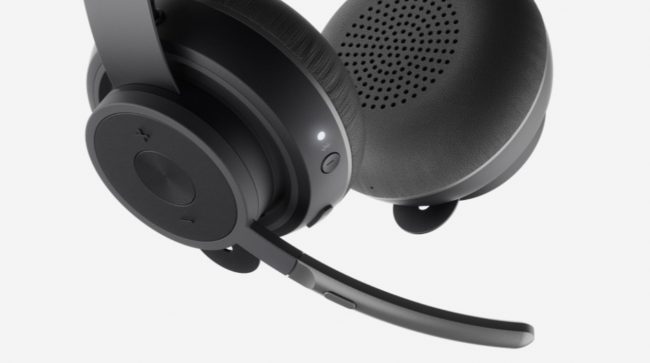 Next to them is a small light that lets you know when the headset is on. 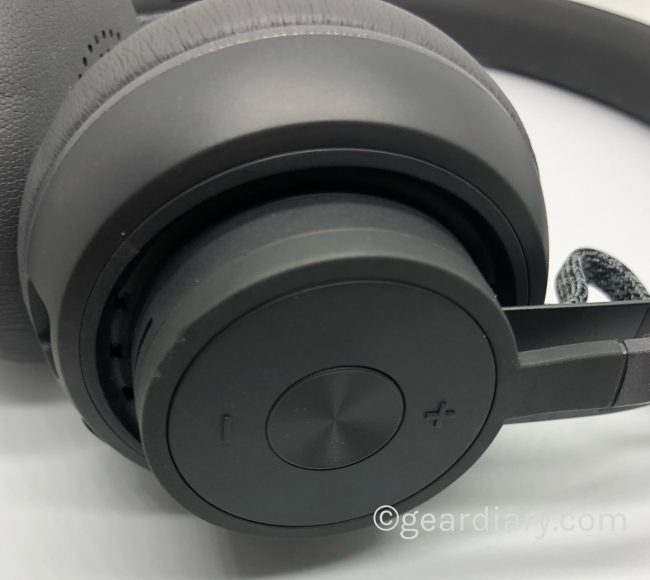 The flat part of the ear cup has volume up and down buttons and a multi-function button in the center. 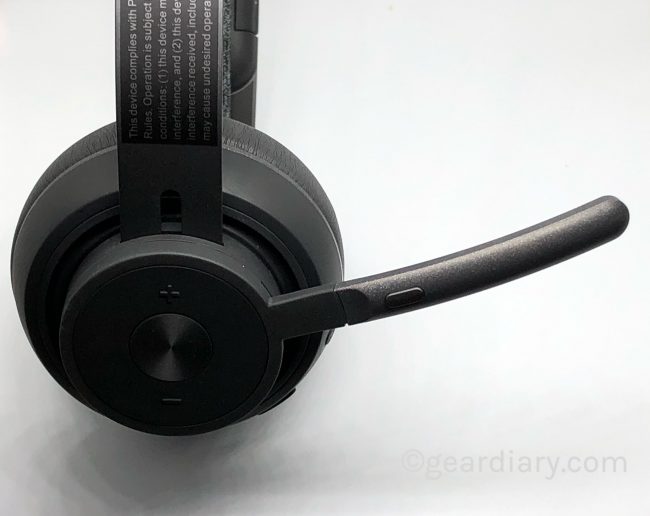 Finally, when taking a high-level view of the headset, it is important to include the Logi Tune mobile app. The app offers a clear interface that lets you control such functions such as muting a call, view charge status, modulate sidetone controls, adjust the 5-band EQ sliders or, if you prefer, choose one of the EQ presets. The app is also key to syncing the headset with multiple mobile devices and updating your headset when updates are available. 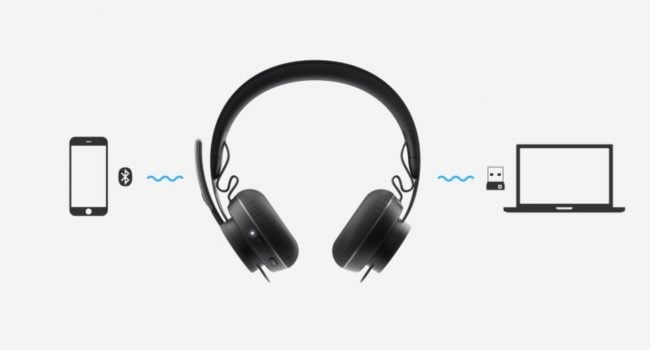 Logitech delineates the features of the headset this way. 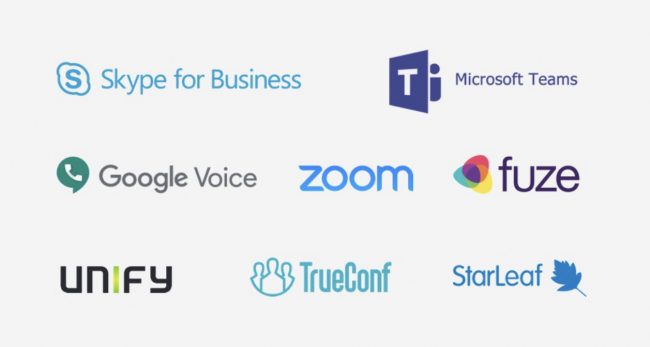 All of those features are enough to make the Logitech ZoneWireless worth a second look but, of course, what matters most is the experience of using it. Thankfully, this is a Logitech product. That means they do a great job on multiple levels.

Thanks to the light design of the headset, it is comfortable to wear. The headband is curved in such a way that the headset places enough pressure to create a good seal on your ears without putting so much that it becomes uncomfortable over extended periods of wearing it. The soft, synthetic material covering each ear cup adds to the comfort of the headset and does a nice job providing a good deal of passive noise isolation.

The controls are limited in number and placed in such a manner that they make it easy to access and control the headset without the need for taking it off or having to overthink things.

I was pleasantly surprised when I used the headset to listen to music. The sound was full, rich, and enjoyable. Having approached this headset with an eye toward its use in a professional context, I didn’t go looking for a quality audio experience. I was impressed by the audio experience the Zone Wireless delivers; you won’t be disappointed!

On the ANC front, there is more to say. I went into this review having reviewed such ANC-powerhouse headsets as the Master & Dynamic M65, the current offerings from Plantronics and many more. All of them do a great job of reducing ambient noise. I was initially surprised that the Zone Wireless reduced noise but didn’t fully block it. My immediate thought was, “These don’t do it for me.” Then I spent more time with them. When I have music playing the ANC is enough to let me only hear the music. And when I don’t have music on, the ANC is strong enough to cut out enough of the ambient sound that I’m able to concentrate on my work without being completely cut off from what is happening around me. So while I do not think this is the headset I would choose for a long flight or train ride, I think these are fantastic for use in an office or if you are trying to get work done at home and there is activity around you. 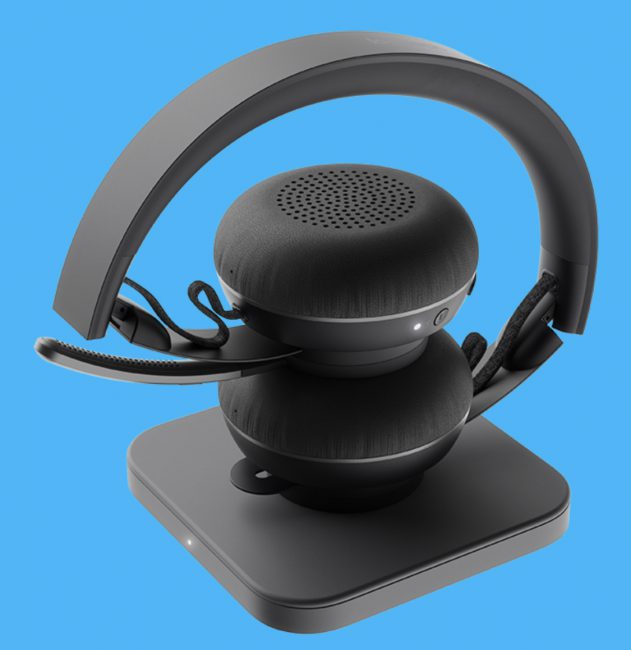 Finally, there is the Qi wireless charging built into the Logitech Zone Wireless. I’ve ever seen this feature in a headset and think it is great. Having the ability to take off the headset and on a Qi wireless charger means that, when I pick it up the next day, it is charged and ready for the new day. This feature might not make sense in a headset designed for travel, but it is a great feature for a headset that is used day in and day out in an office.

Here’s the company’s promotional video for the Zone Wireless:

The Logitech Zone Wireless is an interesting headset. It does a good job delivering quality audio, but that isn’t its main purpose. It is effective at cutting out ambient sound but doesn’t do so as completely as other headsets. Instead, it delivers excellent quality calls, cuts out a significant amount of external noise and charges wirelessly so the headset will always be ready for a long day of work. The Zone Wireless is designed for the office and delivers on that front beautifully. The fact that using it to listen to music is a great experience means you won’t only use the headset at the office but let there be no doubt; this is a headset that is in its element at work. You can check it out here.

What Needs Improvement: Good sound but not for audiophiles; ANC is great for offices but might not be ideal for travel