A few years ago, Raina convinced me to take a cruise. I’ve never had any interest in such a vacation, but, much to my surprise, I enjoyed it. Since then we’ve taken several additional cruises. The only problem? I get seasick. Thankfully, for our last cruise, I had the opportunity to try the Reliefband 2.0. Let’s take a look. 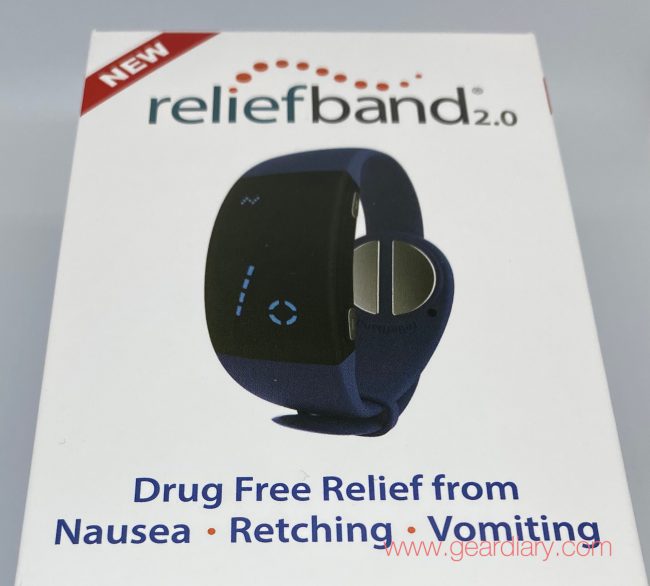 I was sent the ReliefBand 2.0. (Judie has one and reviewed it a few years ago. Here’s her original review.) 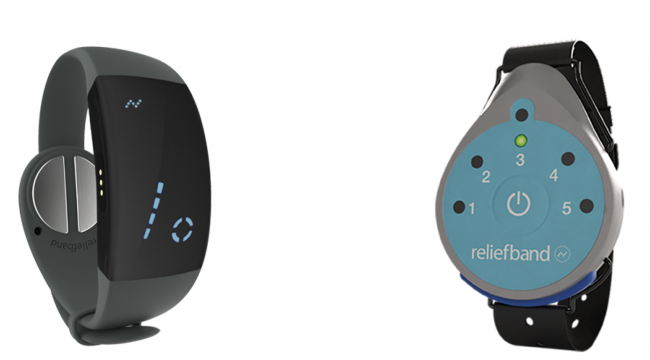 As you can see from this comparison picture, it’s a far more refined device than the original version. It looks very much like a fitness band. It doesn’t have a display, however, and offers no fitness band features. Instead, it offers relief from a variety of ailments that have to do with motion and other assorted nausea-inducing issues. 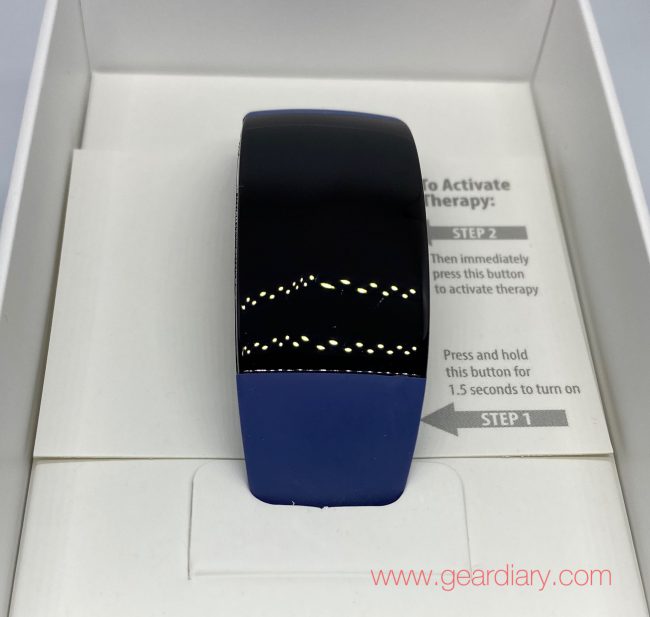 The company describes the product as:

100% natural, FDA cleared prevention and treatment of nausea and vomiting. It’s drug-free, clinically proven, and doctor recommended to get fast and effective relief without drugs and without delay.

Before getting the Reliefband I tried several different remedies. I popped Bonine pills regularly; I had acupressure bands on each of my wrists and, the one time during a cruise in the Galapagos Islands when the seas got very rough, I took Dramamine. Here’s a chart showing a comparison between what Reliedbad offers and some of the more common approaches to dealing with motion sickness with their product.

The people behind the Reliefband aren’t shy about singing their product’s praises. Here’s just one example:

Reclaim Your Life From The Fear Of Nausea: The original non-invasive, class II neuromodulation device that is cleared by the FDA for the prevention and treatment of nausea and vomiting associated with motion sickness, morning sickness, chemotherapy, and post-operative nausea, and now cleared to prevent and relieve nausea and vomiting associated with physician-diagnosed migraines, anxiety, and hangovers.

They go on to enumerate the various issues from which you can be helped using their technology. These include: 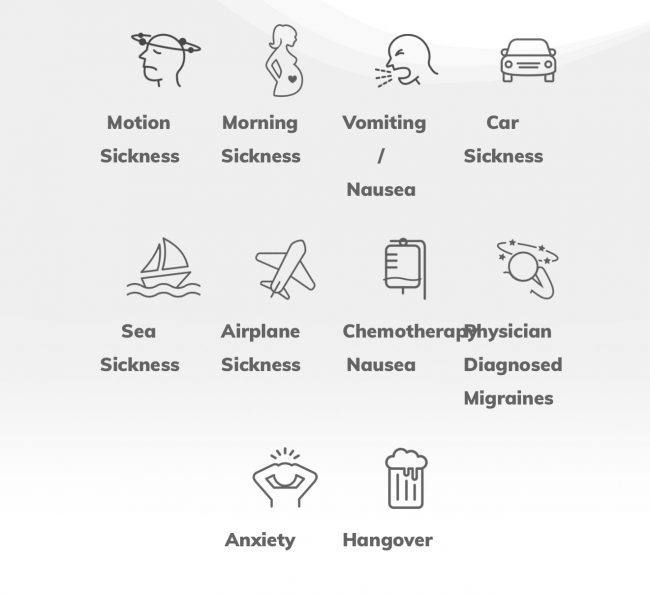 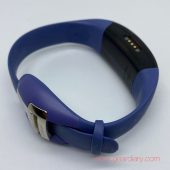 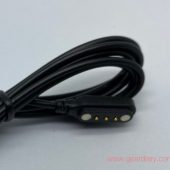 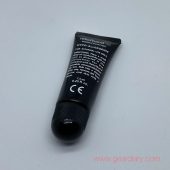 Inside the box, you get the Reliefband 2.0 device, a magnetic USB charging cable, a 7.5 mL tube (0.25 oz) of hypoallergenic conductivity gel, and instructions for how to use the product. 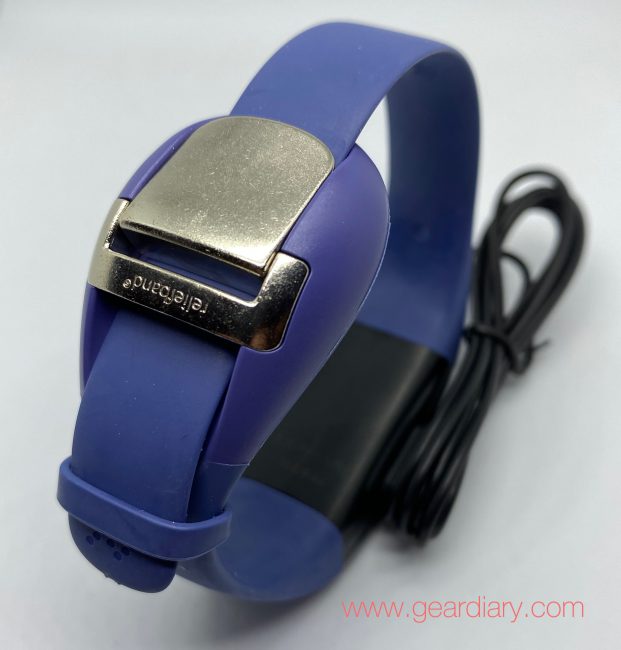 The fact that it uses a proprietary charging system is a bit of a bummer considering the fact that if you lose the charging cable during a trip, you won’t be able to get relief until you’re able to purchase a replacement. That could turn a great trip into something awful. 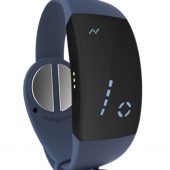 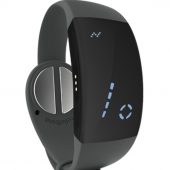 When ordering the product, you get your choice of color. There’s a version that comes in charcoal and there’s the version that I received which is referred to as “denim slate blue.” 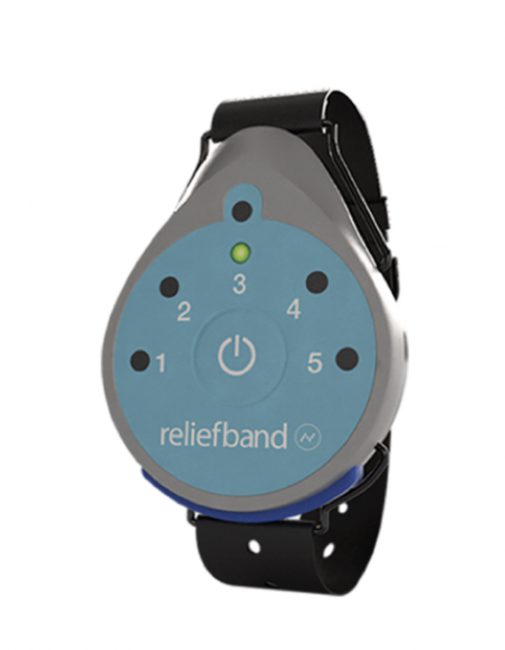 As I noted previously, the original version which looks like you’re wearing something from a 1960s science-fiction show. This updated version looks like a refined fitness tracker. 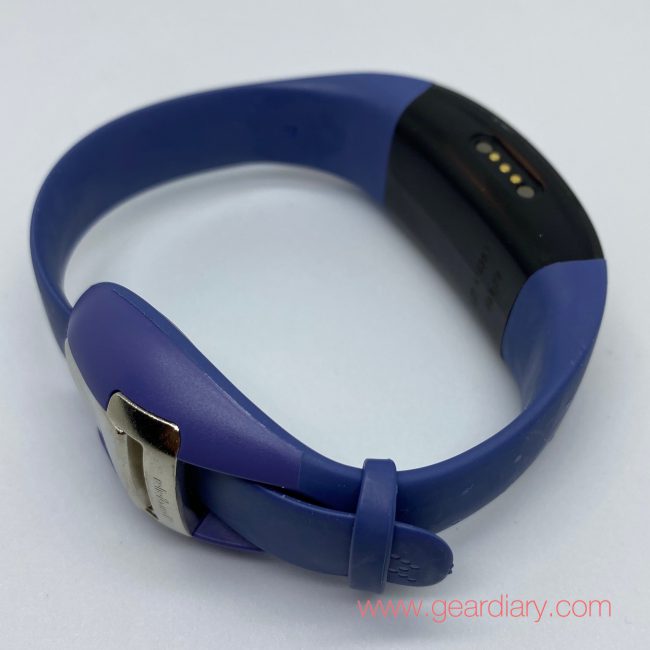 Reliefband has no side effects, works quickly, is clinically proven, and has been tested in hospitals. Unlike the acupressure bands that I wore during my first cruises, using Reliefband requires a bit of “set up.” To get started, you need to charge the device using the proprietary charging cable included in the box. The device takes about two hours to charge fully and should give you close to 17 hours of use at mid-intensity. You then place a small drop of the contact gel on the underside of your wrist. This contact gel allows the electrical current from the device to have an impact on your nervous system.

But how, you might ask, does Reliefband work? It’s not magic. It’s science… and biology.

Reliefband uses patented, clinically-proven, FDA-cleared technology to treat motion sickness. The unique neuromodulation technology was developed for use in hospitals and alters nerve activity through targeted delivery of gentle pulses to the underside of the wrist to “turn off” feelings of nausea, retching, and vomiting. It works quickly without side effects. 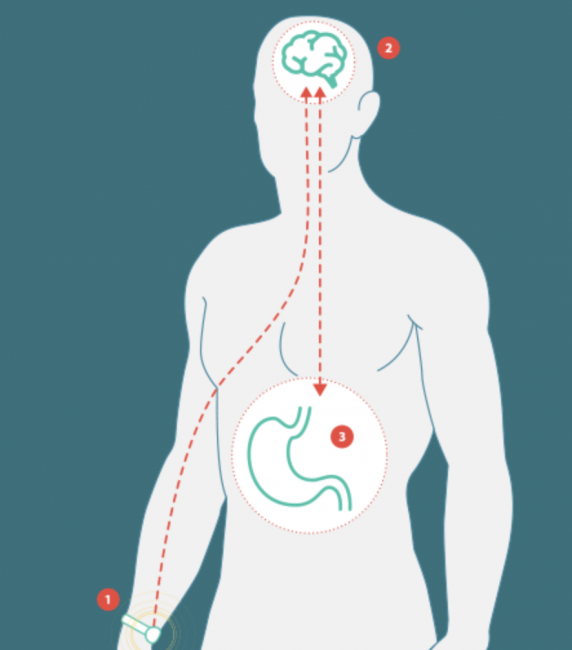 This video explains the science visually:

Reliefband describes the process of using Reliefband as “AAA”:

Here’s a video explaining how to use the product:

This diagram shows the controls and the display of Reliefband 2.0/Reliefband Premier. 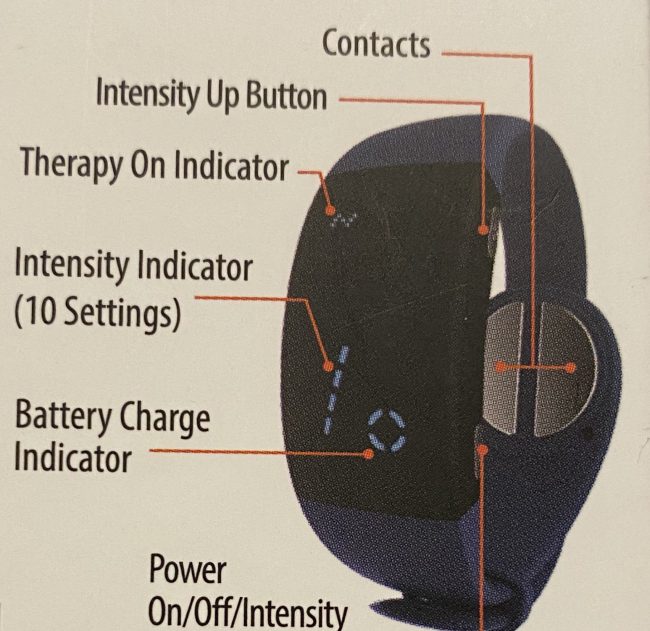 The company also offer these suggestions for getting the maximum benefit from the device:

A few things stand out from this list. First, they clearly understand that not everyone will get the maximum benefit immediately. That’s why they suggest trying it on both wrists to see which one has the greatest effect. They also understand that adjusting the intensity is going to be a trial and error process but is an important part of the process. Finally, as they indicate, it’s important to have plenty of Reliefband Gel on hand since it won’t work without it. 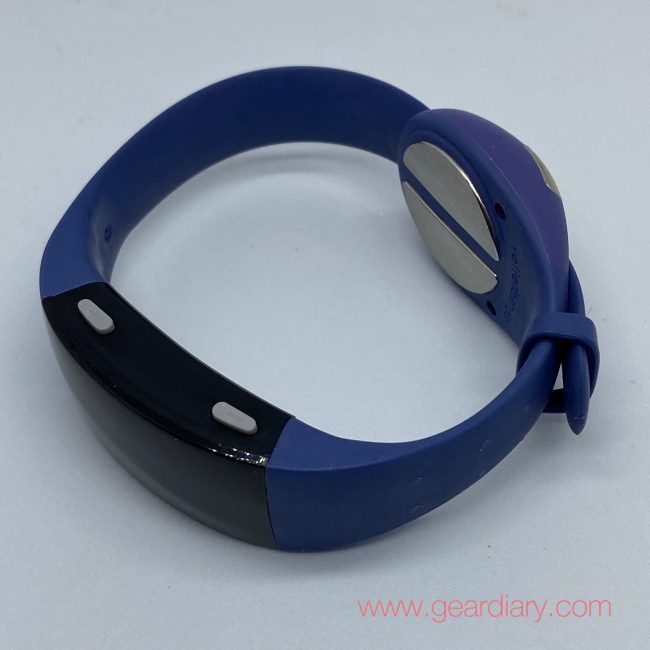 So how, you might ask, did it work for me?

My answer is that I give it a mixed, or at least incomplete, review. On the one hand, I didn’t find myself having any nausea during our cruise at the beginning of this month. Then again, the seas were never that rough, so I don’t have a good sense of how effective the product was. Don’t get me wrong, I’m a big believer in this technology. One of the ways I deal with the pain from my rheumatoid arthritis is through the use of a device that takes a similar approach and sends an electrical charge through my nervous system to reduce pain and inflammation because the waters were fairly calm, though it’s hard for me to know whether or not this was truly working to alleviate my seasickness. 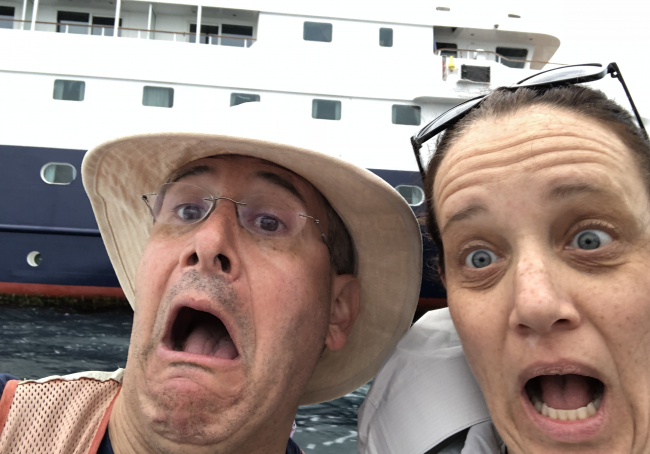 But here’s the thing. If you have ever been seasick, you know that it’s one of the more miserable experiences one can have. You know that seasickness can ruin a trip. And you know that once you get seasick, it’s very difficult to feel better. In other words, seasickness sucks. And if you are someone who gets seasick, or gets motion sick, or is undergoing chemotherapy, or has postoperative nausea, you know that there is no amount of money that is too much if something can offer relief. So while I wish I could finish this review with something along the lines of, “I have suffered from seasickness every time I’ve been on a cruise and for the first time thanks to ReliefBand 2.0 I felt great the entire cruise…”- I can’t. 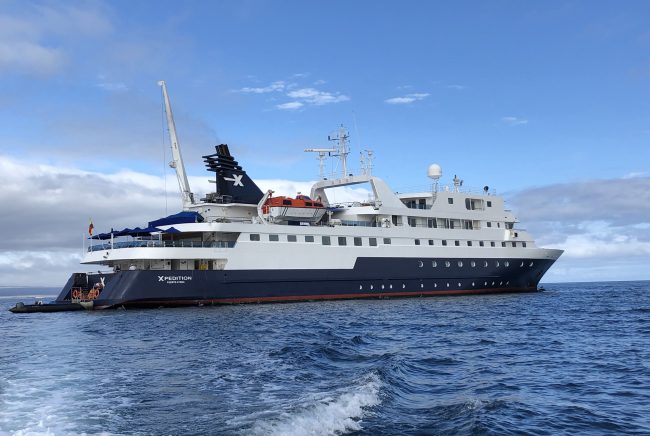 What I can say, however, is that if you do suffer for motion sickness or seasickness or morning sickness or any other type of nausea, it’s worth trying this device. It comes with a 30-day money-back guarantee and it’s only $200. Purchase one right before you take your next trip or if you’re currently fighting regular periods of nausea because of something happening in your body and see if it works. If it does, make sure to order some extra tubes of contact gel on hand. They’re only $14.99, and you want to have enough to keep the device working. If, however, you purchase the device and it doesn’t give you the relief that you were hoping for, simply return it and get your money back. You have 30 days to try it and really nothing to lose. 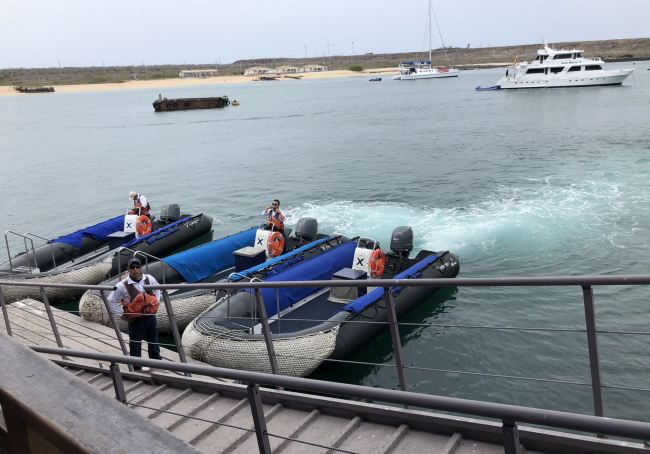 As for me, I will be taking a cruise to Alaska this coming July, and I’ll be taking relief been 2.0 with me. I suspect the seas will be a little rougher than we experienced in the Caribbean this month, and it’ll be a better test of whether or not this particular approach solves my seasickness. Seasickness is horrible, but it’s not going to keep me from taking the types of vacations and having the kind of experiences that Raina and I want to have.

The ReliefBand 2.0 sells for $199.99 (or you can purchase the original relief band for under $100); they are available directly from the manufacturer.

What I Like: Reliefband 2.0 looks like a fitness device; Comfortable; Drug-free relief from many common stomach ailments caused by motion, illness or pregnancy; Easy to use; Comes with a 30-day money-back guarantee so you can try it and determine if it offers enough relief