Stargazer Cast Iron was founded when CEO Peter Huntley began his search for the perfect cast iron skillet. As a passionate home chef, he found that modern cast iron pans lacked innovation and vintage quality while actual high-quality vintage cast iron was only available at exorbitant prices. In 2015, the Stargazer Cast Iron skillet was born in Peter’s garage. 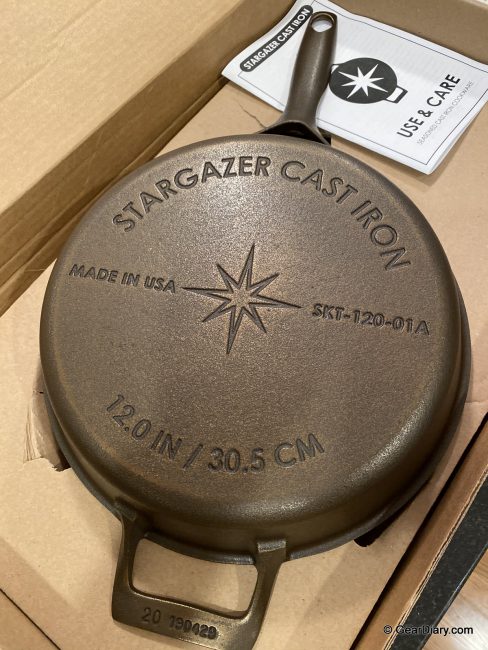 After six months, 21 designs, and many prototypes, Peter found his ideal cast iron skillet and this is when Stargazer Cast Iron was born. Featuring a super-smooth cooking surface, optimized weight, drip-free pouring, and a stay-cool handle, Stargazer Cast Iron skillets are a sight to behold and a ton of fun to cook with. 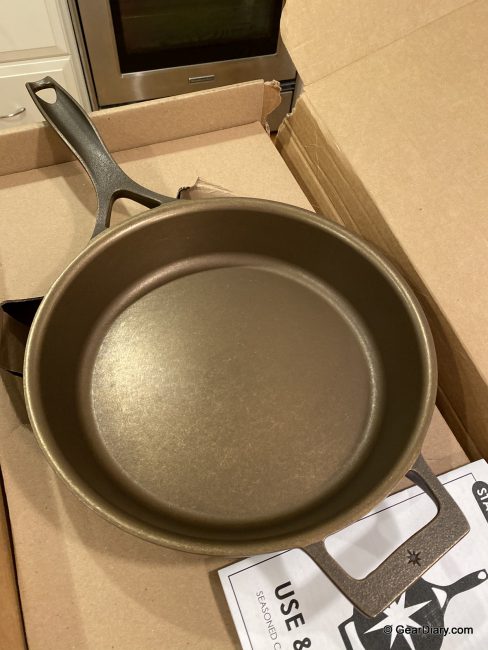 Not only does Stargazer make great cast iron skillets, but they also stand for something. They make a high-quality product 100% in the USA, making stops in Wisconsin for casting, Ohio for machining, and Pennsylvania for inspection, finishing, seasoning, and shipping. They are also passionate about sustainability, using recycled sand for their casting molds, recycled iron to cast their skillets, and recycled paper to build their shipping boxes. They even pledge to pursue additional creative ways to reduce their carbon footprint as the company grows. 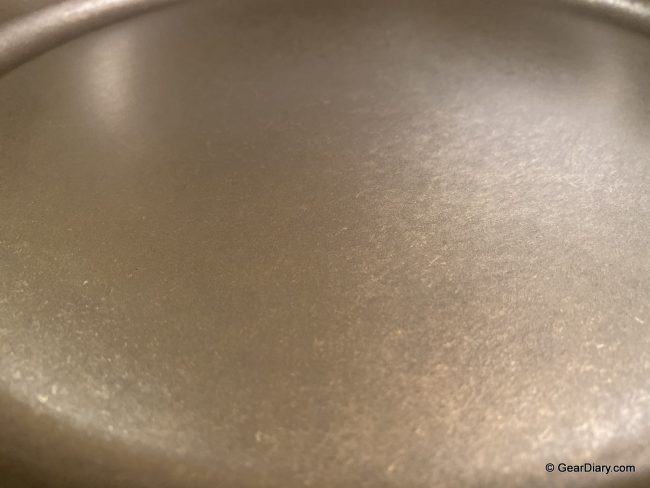 I was immediately impressed after opening the recycled box and feeling the heft, or lack thereof, of the 12” seasoned skillet that Stargazer was kind enough to send. It looks much heavier than it is, and that’s part of what makes Stargazer’s cast iron skillets so great. They’ve figured out the perfect balance between ease of use and heat retention. Most people think of cast iron skillets as these supremely heavy pans that need to be lugged around with two hands, and while that’s true for many, Stargazer is the exception to the rule. 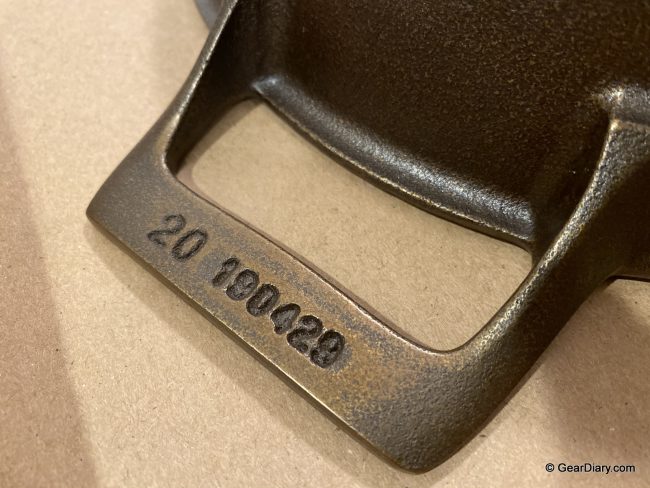 Weighing in at just 6.5 pounds for a 12” cast iron skillet, when competitors like Lodge or Staub weigh between 7.5 and 8 pounds makes a difference while moving around the kitchen. What’s even more impressive is that the Stargazer skillet still retains just as much heat and cooks just as well as any of the other cast iron skillets out there. 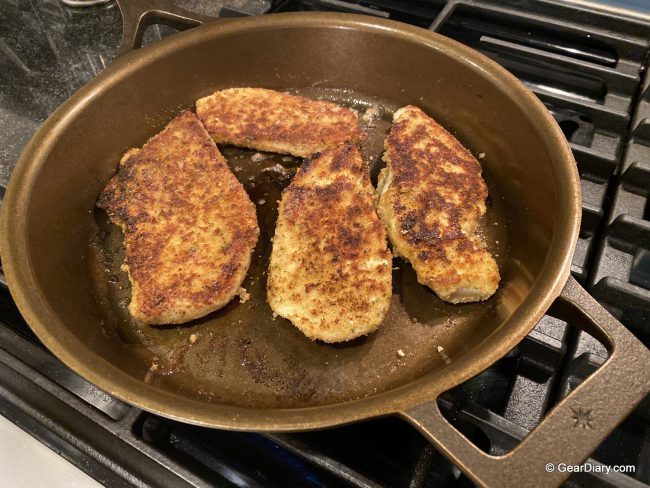 Stargazer’s satin-smooth cooking surface is another reason I was impressed at the start. I always think of cast iron as this raw-looking caveman type of cooking equipment, but Stargazer raised the bar with their slick surface that reminds me of stainless steel. It has been extremely easy to cook on and we haven’t noticed any food sticking to the cooking surface. It’s as non-stick as you can get in a cast-iron skillet, which makes it really multi-functional. While you can sear a steak in it extremely well, and we did, you can use it for almost anything you’re going to cook in your kitchen, on your grill, or over an open fire with minimal oil. 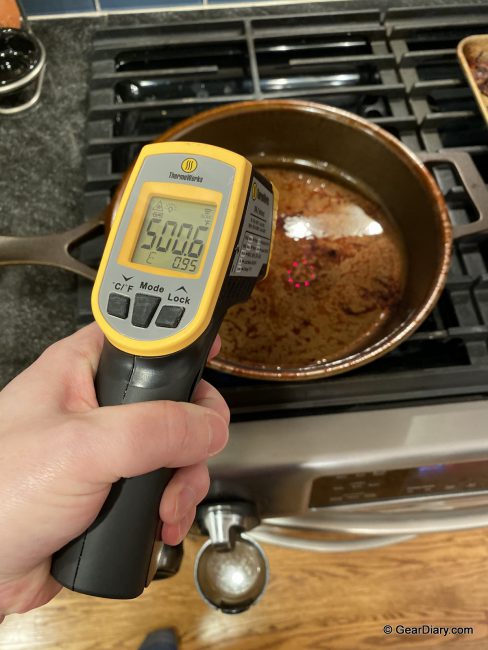 Heating our skillet to 500F prior to searing our ribeye steak. 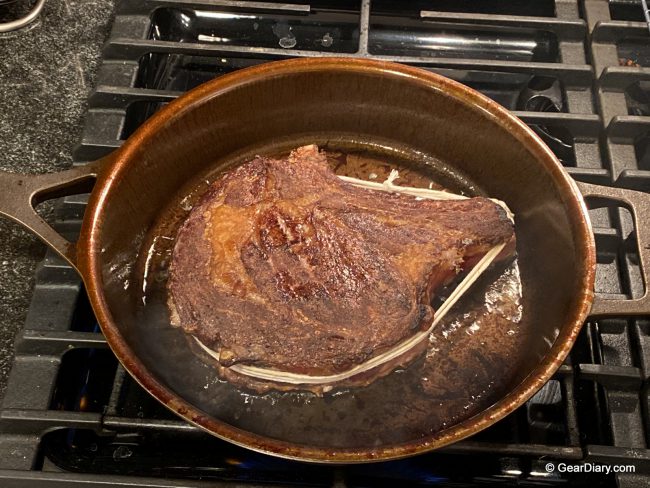 Look at that gorgeous sear!

While some cast iron pans have pour spouts which can lead to accidental spills, Stargazer went with a flared rim that allows you to pour from anywhere without dripping down the side of the pan. Their unique handle design also reduces the connectivity between the cooking surface & heat source and the handle, allowing you to grab the handle without fear of burning yourself. While the forked handle doesn’t completely remove the risk of a burn, it definitely allows you to cook for longer than its competition before needing a towel or oven mitt. 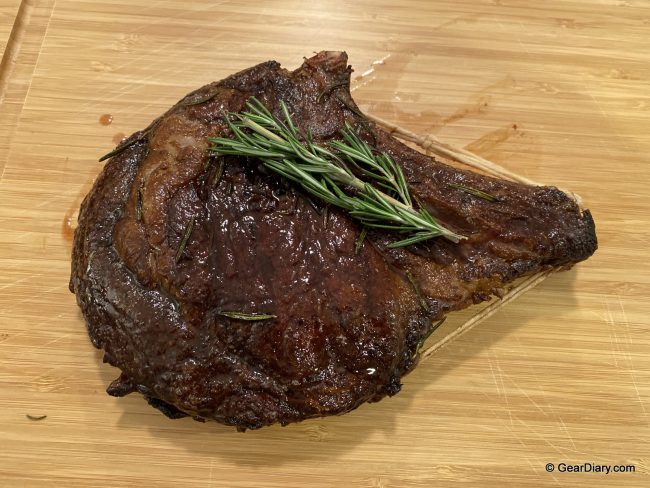 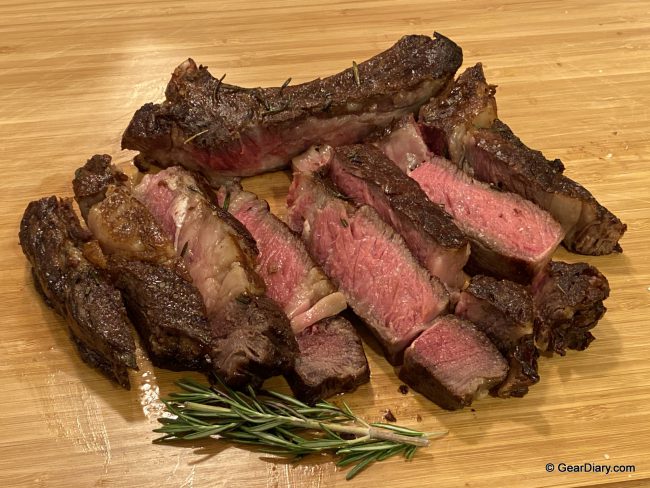 Is there a more beautiful sight?

If all of the above unique features aren’t enough for you, Stargazer’s cast iron skillets are all-natural, made without chemicals, just pure iron. Stargazer also promises that your skillet will last forever and their promise is backed up by an infinite warranty that covers manufacturer’s defects, not improper use or user error. 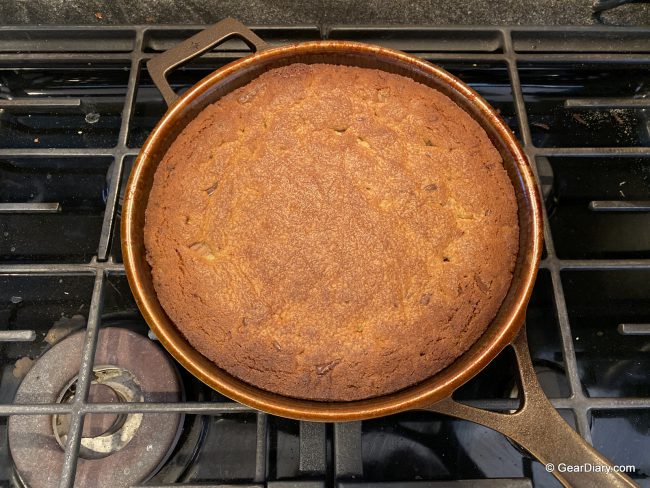 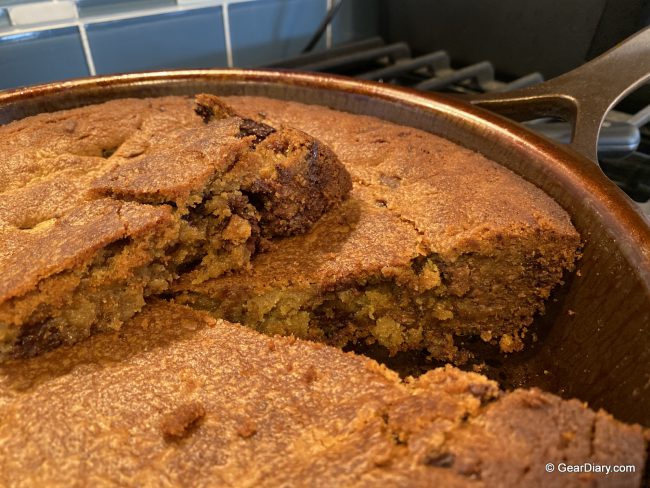 A nicely cooked skillet cookie baked in the oven

During testing, we cooked some chicken cutlets, which we usually make on stainless steel pans, we seared a steak at 500 degrees, we baked a skillet cookie in the oven, and we even sauteed some shrimp. We loved the even heat retention and you can see just how even the browning was in the chicken cutlets as well as the sear that covered my ribeye steak over 100% of its surface. The skillet cookie was baked really evenly all the way through, and the shrimp got some nice browning, even though it was a very quick cook.  While not a deal-breaker, I found the sides of the pan to be a bit deep at 2.3-inches, but I just changed the angle of my utensils and I was good to go after a bit of practice. 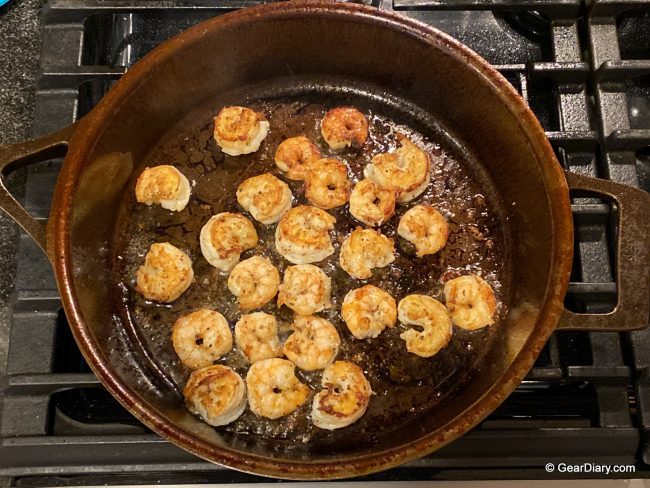 I’ve got to say that I’m a huge fan of Stargazer after my experience with their 12” cast iron skillet. If you’re looking for a cast-iron skillet that will last you a lifetime and aren’t afraid of spending a little more for high quality and innovative design, Stargazer is the skillet for you.

You can purchase your Stargazer cast iron skillet at StargazerCastIron.com where their skillets start at $85 for a non-seasoned 10.5-inch skillet and go up to $130 for a seasoned 12-inch skillet.

What I Like:   Excellent heat retention leading to even browning; Light for a cast-iron skillet; Gorgeous copper brown color and nice engraving on the bottom; Stay-cool handle works for a while; Great non-stick type cooking surface

What Needs Improvement:  Rim is a bit deep, but it’s nothing you can’t overcome