I have owned several travel tripods that were decent for quick shots, but serviceable at best. Something usually broke under minimal use after a short time, usually a knob, lever, or handle. Peak Design’s Travel Tripod is the tripod I never knew I was looking for; simply put, it is awesome. 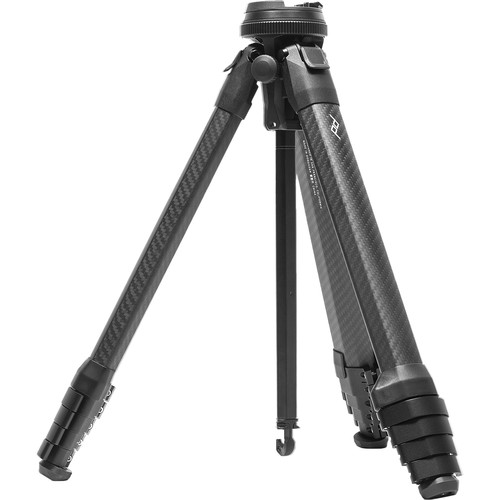 As the saying goes, you can only make one first impression, and Peak Design’s Travel Tripod does not disappoint. The case that the tripod comes in is well-designed and sleek. It lists the tripod’s features and specs utilizing elegant typeface, diagrams, and photos. Popping open the top of the case, which is held on via an incorporated fabric elastic band, reveals a slim, flexible neoprene sleeve protecting the tripod. This case is well designed, including small nylon loops at either end and a thick plastic ‘handle’ between them. These mechanisms undoubtedly provide enough ways to attach any carrying straps or to any gear bag you might have. 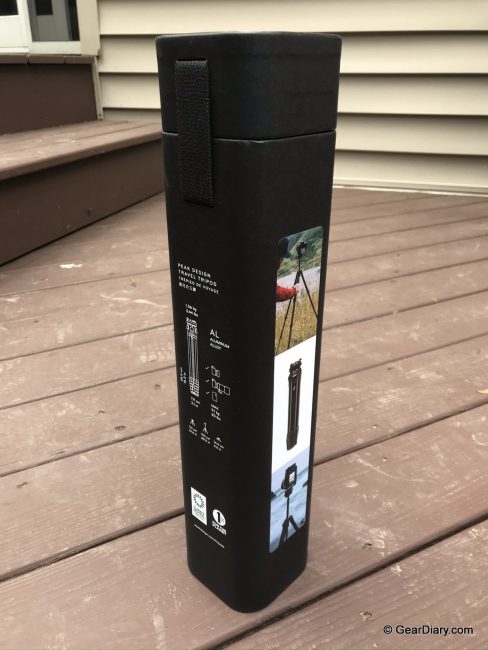 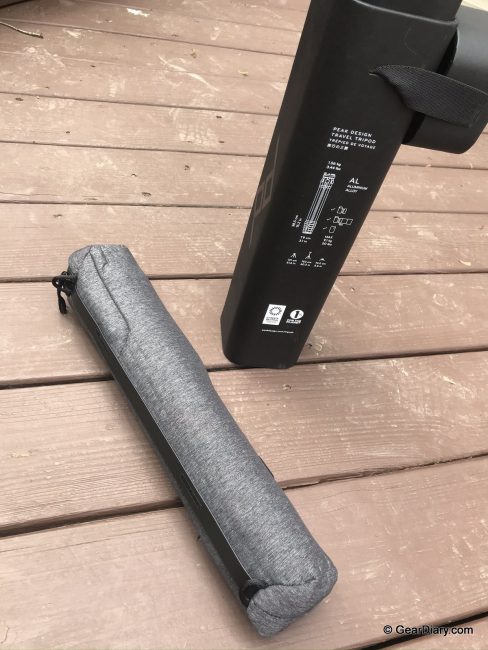 When holding the tripod in your hands, the tripod feels compact, solid, and well-built. In its collapsed state, the Travel Tripod holds true to Peak Design’s claim of being free from “needless bulk” and packing down to the “diameter of a water bottle.” Its legs open easily, and the four levers to unlock and extend its legs are minimal and easy to operate lock down securely. One of the three legs has a holster that attaches to the inside of that leg to stow an included hex tool.  The hex tool is used to remove the lower part of the middle frame, allowing you to lower the camera as close as possible to the ground. 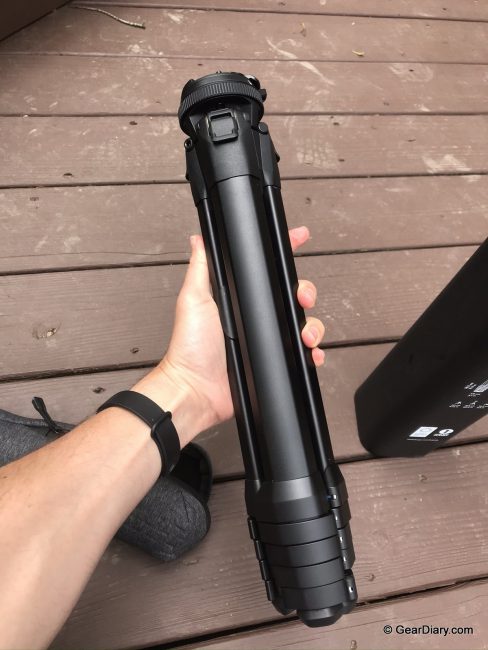 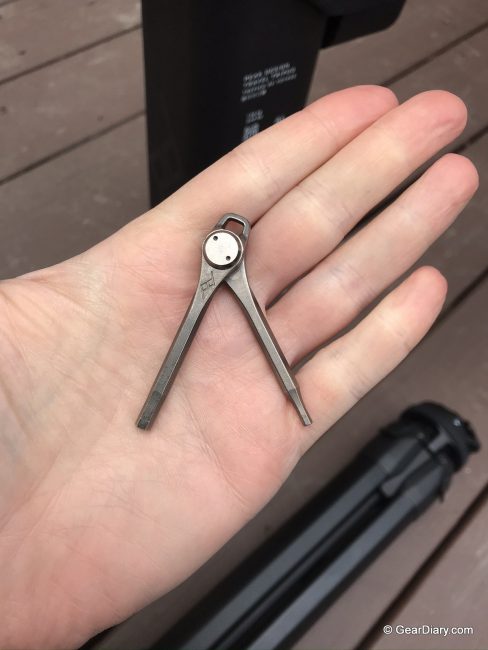 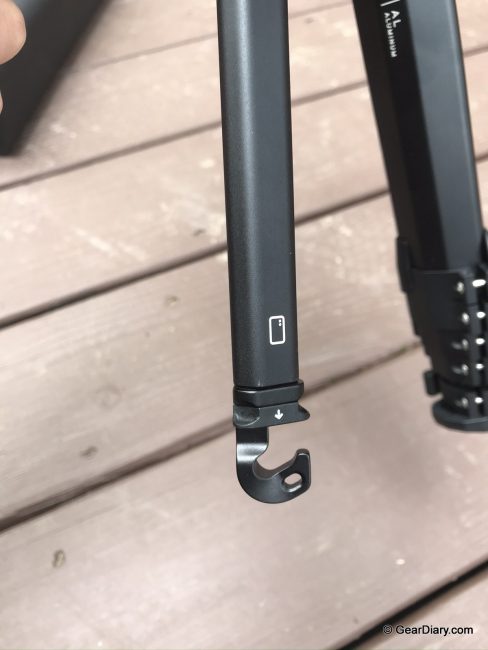 The compact ball head stows away neatly in the negative space where the legs meet. It has a handy floating-level right on the top of the plate. There are two stacked knobs on the top. The bottom one locks down the movement of the ball head, and the top one locks the quick-release tab for the standard camera plate attachment. 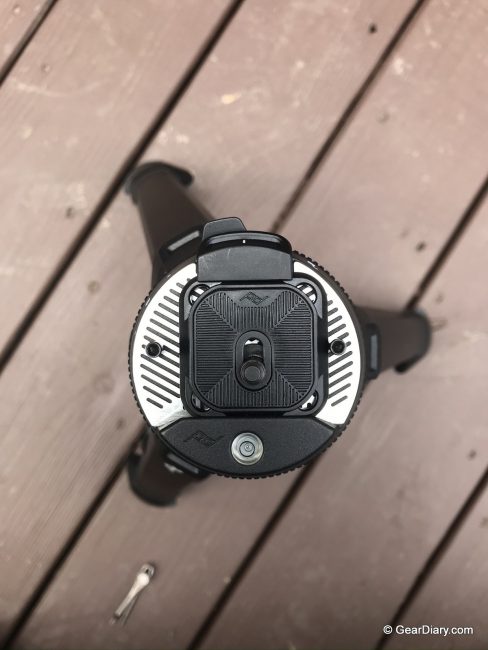 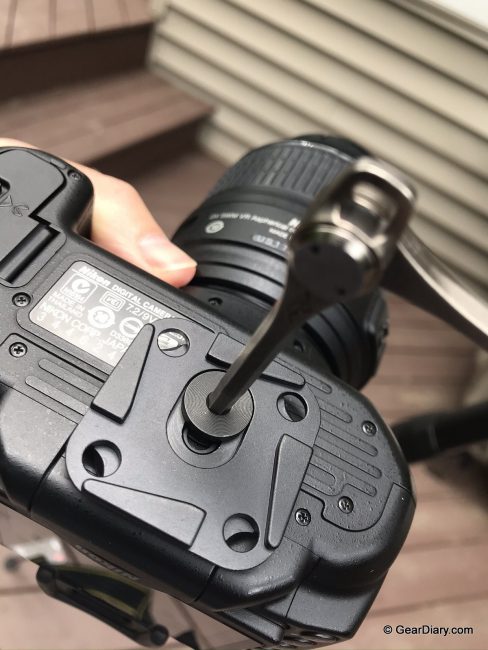 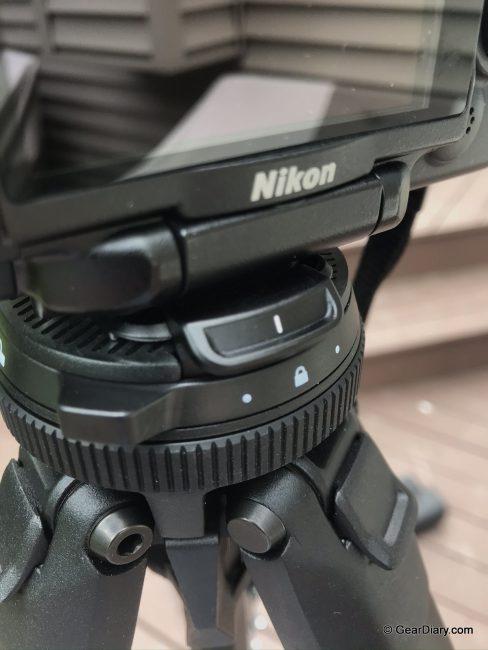 The Travel Tripod can accommodate a maximum camera weight of 9.1kg (20lb). Once opened with the legs fully extended, the tripod sits at the height of 131cm (51.6in). When the center column is fully raised, the camera plate reaches a max height of 153 cm (60.2in). The tripod can be lowered to an awesome 14.2cm (5.6in) from the ground without too much trouble. It is a unique process to do so, but a fantastic option that gives this tripod versatility that you wouldn’t want to be without. 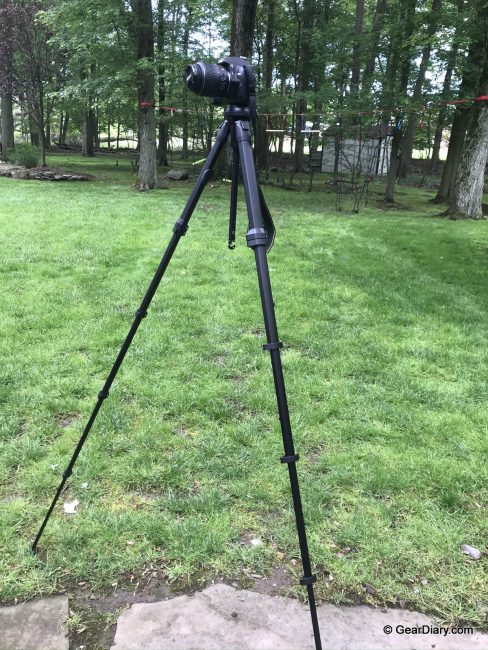 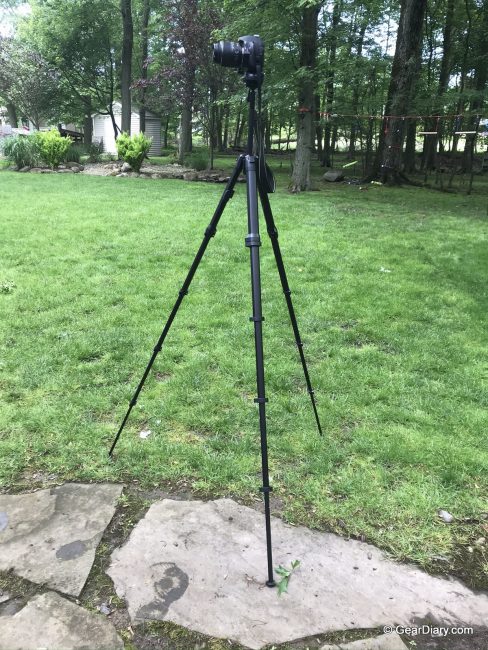 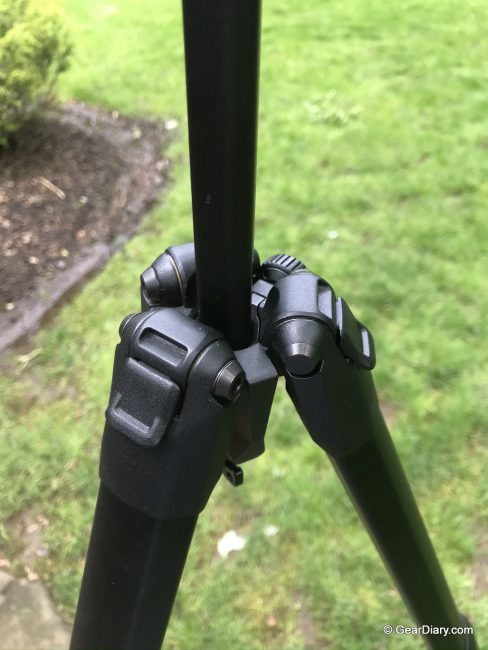 There is an excellent feature that this Travel Tripod boasts that can’t be missed. The standard camera plate can be easily swapped out for the included smartphone bracket that mounts directly into the same space occupied by the camera plate. The smartphone bracket stows away inside the tripod center column, with a nifty quick release tab that doubles as the tripod’s weight anchor. The compact ball head unlocks easily and pivots simply to allow you to transition from shooting in landscape orientation to portrait orientation extremely fast. Very handy! You can even remove the ball head and the center column and re-attach it to the tripod inverted to get shots even closer to the ground. Very cool! 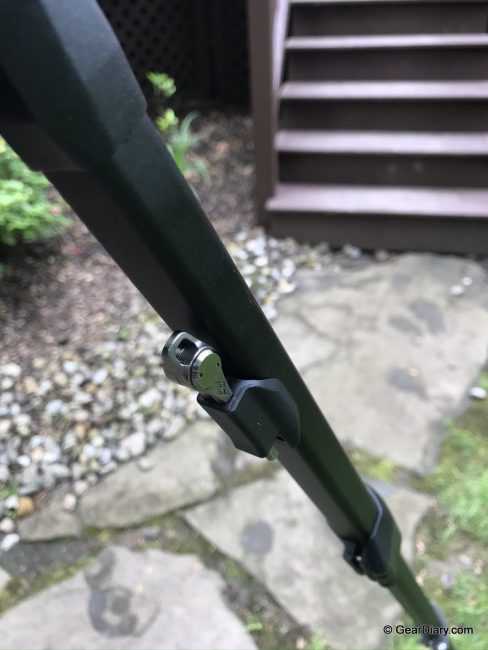 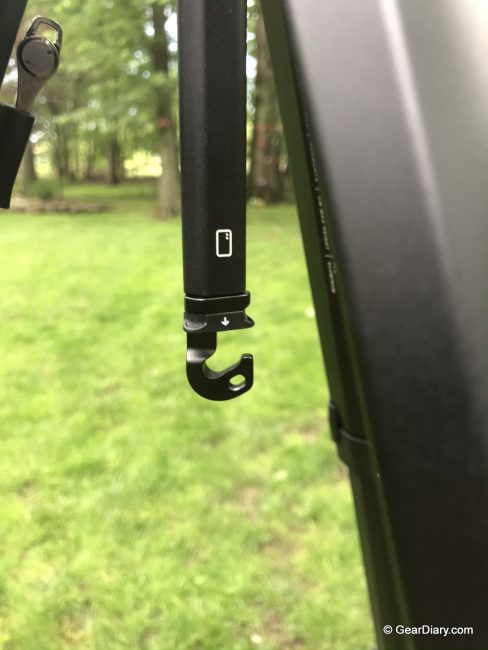 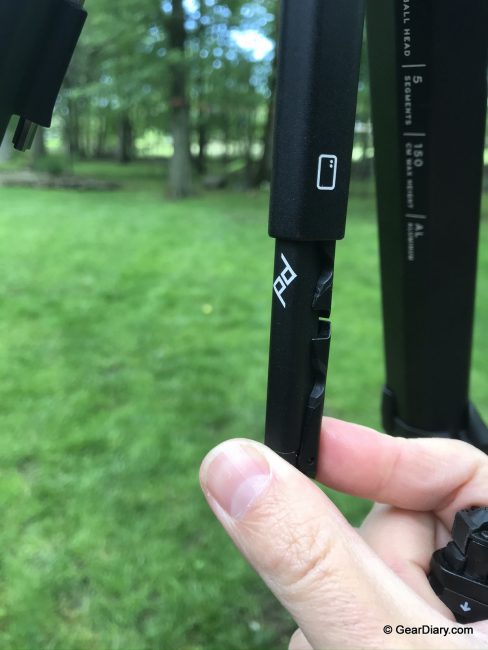 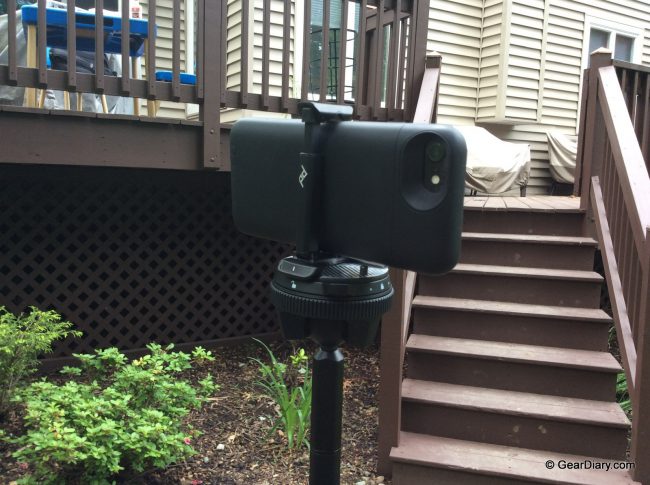 Overall, I like the tripod very much, and I only have minor complaints. The floating level on the head plate could be obscured depending on the size camera you are using, which could make balancing difficult. When adjusting the tripod’s positioning, the camera plate lock switch and the ball head adjustment lock are very close to each other, and I’ve often adjusted both unintentionally. The other small issue I have is with the hex tool holster that attaches to a leg. Its grip on the holster is shaky, and the tool often slides out. There is a pocket that you can stow the tool in the tripod’s case, which might be your best bet. 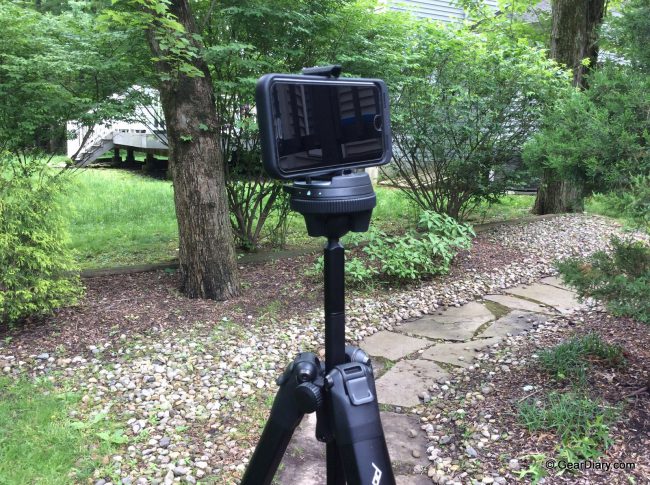 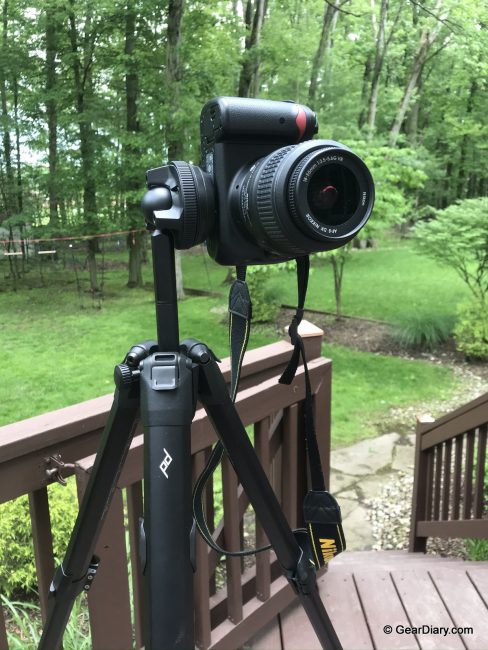 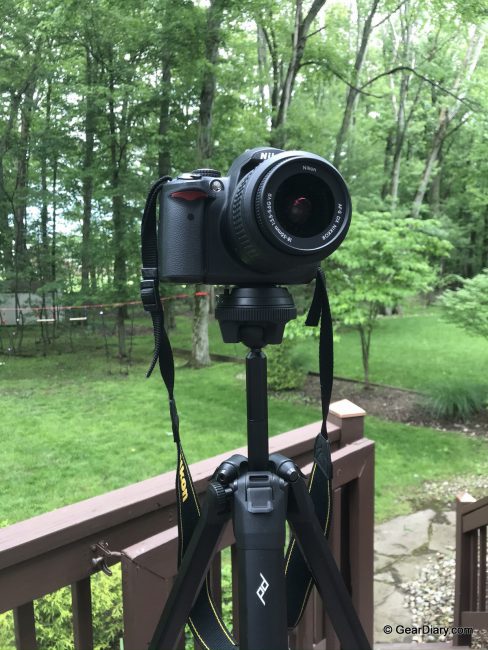 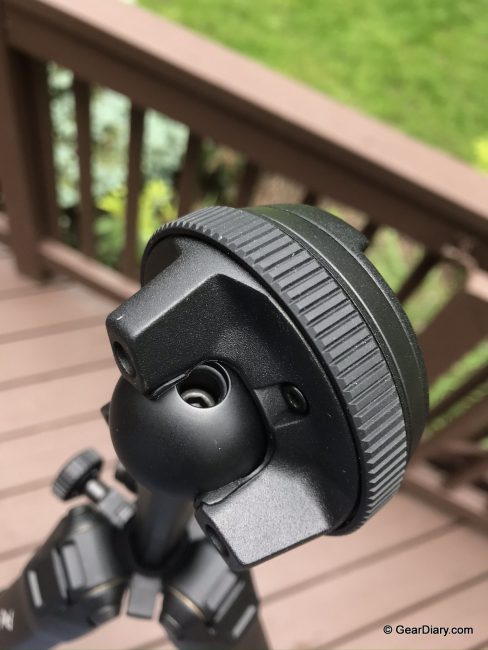 The retail price of $349.95 is not cheap for a travel tripod, but this tripod feels worth the investment for anyone from a hobbyist to the professional. The versatility, compactness, and ruggedness seem to indicate that the Travel Tripod will last for many years to come. Peak Design also states that the tripod is 100% serviceable and backs it with a lifetime guarantee. It could be the last tripod you ever purchase. 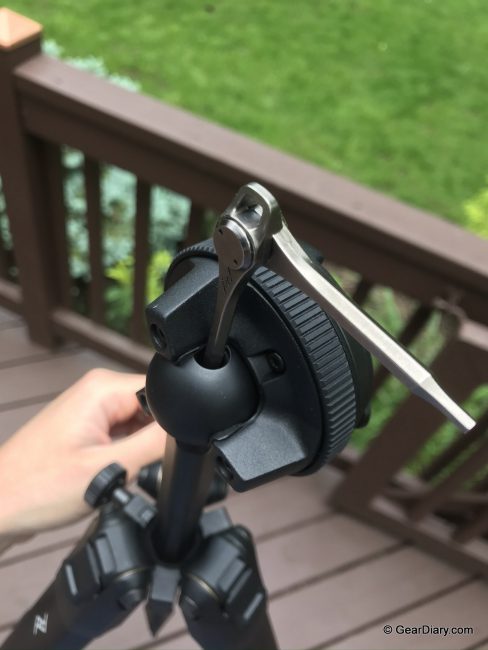 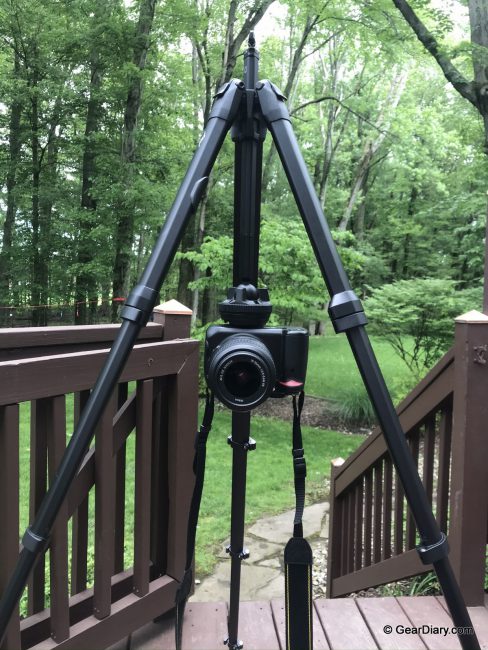 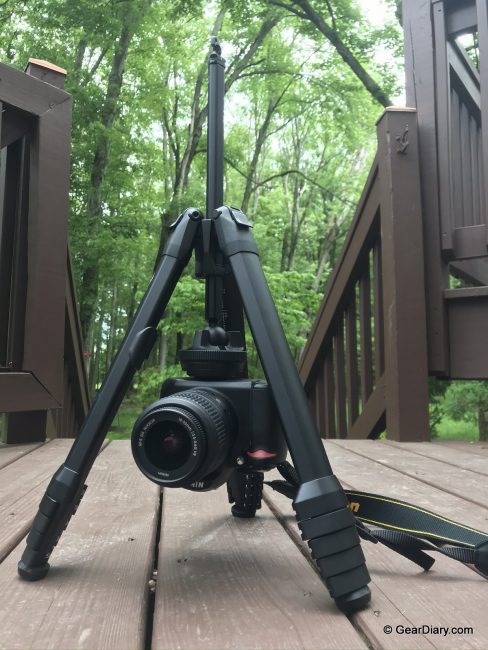 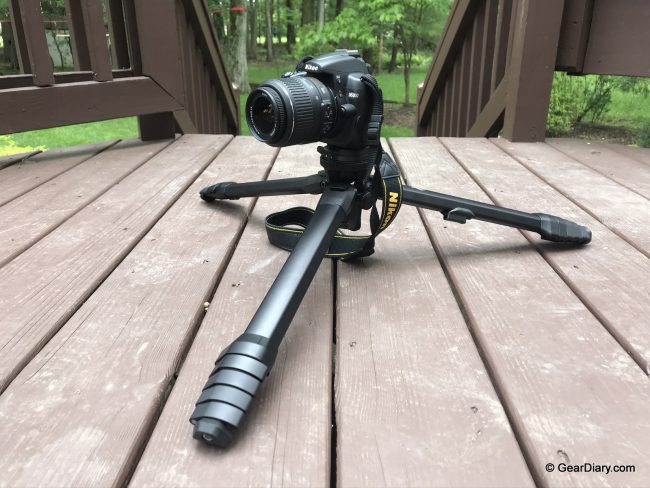 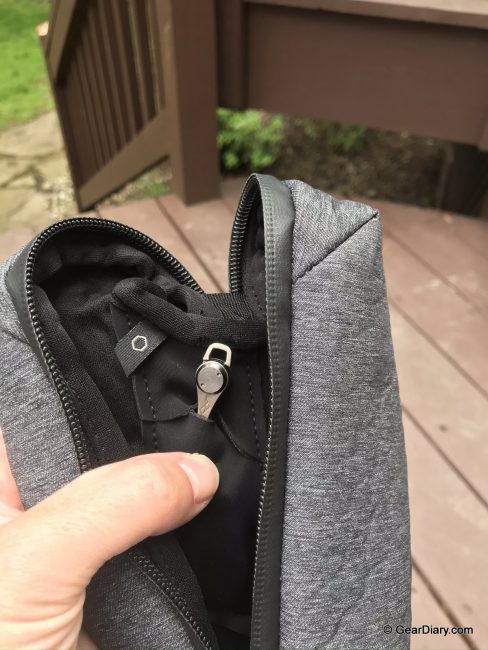 The Peak Design Travel Tripod is available in Aluminum (the one we reviewed here) for $349.95 or in Carbon Fiber for $599.95; You can get them directly from the manufacturer.

What I Like: Small, compact, and light; Tons of built-in features; Compatible with mobile phones; Great travel case

What Needs Improvement: Floating level may be obscured with a large camera; Camera plate lock switch and ball head lock adjustment are a little close together