I have never wanted to “get away” more than the months spanning the COVID-19 pandemic, where my family was being extremely cautious and avoided public places. What a better way to escape than through virtual reality? The HTC Vive Cosmos Elite was an extremely welcome break from the monotony thanks to the immersive experience. The kit retails for $899. 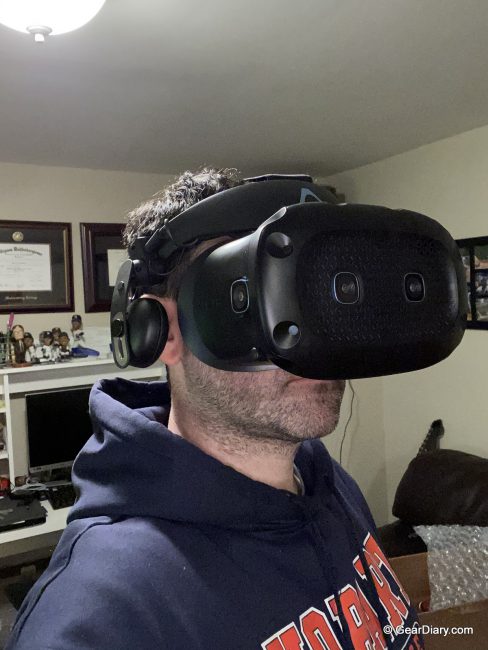 I’ve always been skeptical of virtual reality. My first taste of it was with Google Cardboard, where you slip your smartphone into a paper viewer. It felt like a gimmick back then, but I finally understand the hype. Thanks to an improved display, accurate tracking, comfortable and feature-filled controllers, and a library of fun games, I’ve finally been converted to a VR gamer.

The HTC Vive Cosmos Elite uses Lighthouse tracking base stations that generate very accurate external tracking, which adds to the realistic experience. The Cosmos Elite utilizes new LCD panels with a combined 2880 x 1700 pixel resolution, which is an 88% increase over the original HTC Vive. There are also adjustable headphones that sit on top of your ears to deliver stereo sound that adds to the rich virtual environments. 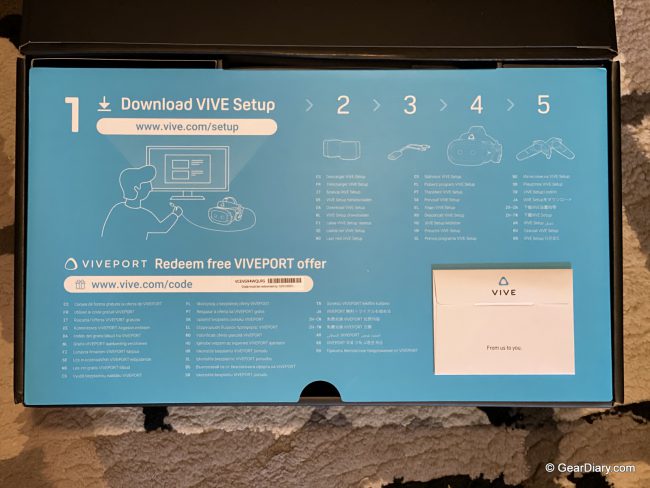 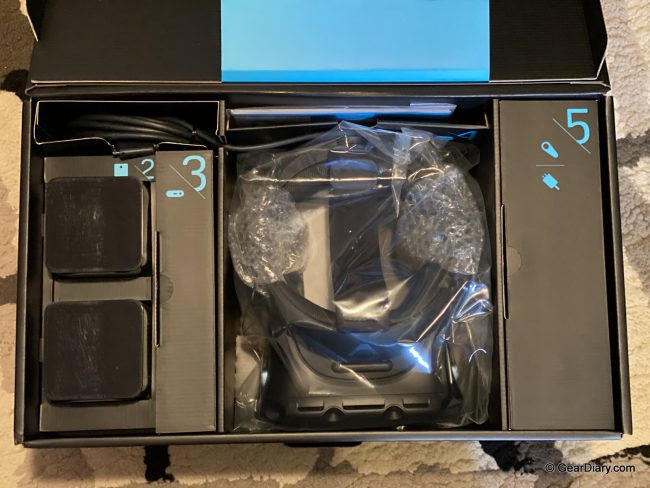 The Cosmos Elite headset is fit using a crown-style closure that can be tightened on your head, allowing you to feel confident that the headset will not move. The Cosmos Elite’s one-of-a-kind flip-up head-mounted display (HMD) design is a nice feature that will enable you to pause your game and check your phone or have a real-life conversation without completely taking off your headset. It’s a great convenience feature, though I have a feeling the headset might fit slightly better without a flip-up HMD. 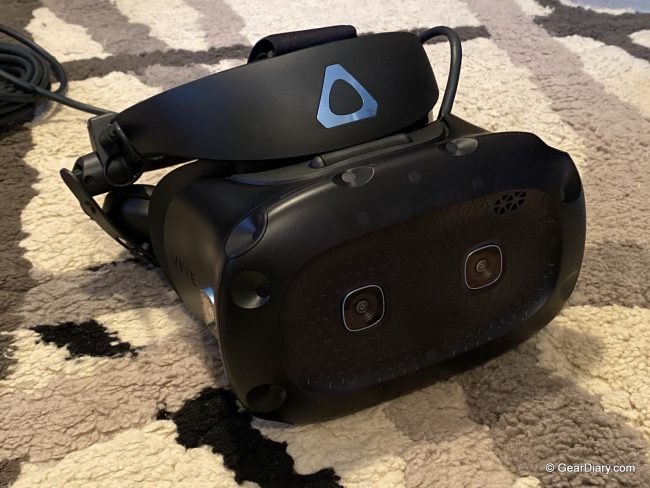 HTC also offers a wireless adapter, allowing you to free yourself of wires and get immersed in the virtual reality experience. The only thing that has been holding myself back from completely immersing myself in the VR experience is the dang wire attached to my headset. Especially with fast-moving games, you can get tangled up reasonably quickly. With the wireless adapter, you’re free of those pesky wires, for the most part.

Everything included with the wireless adapter. 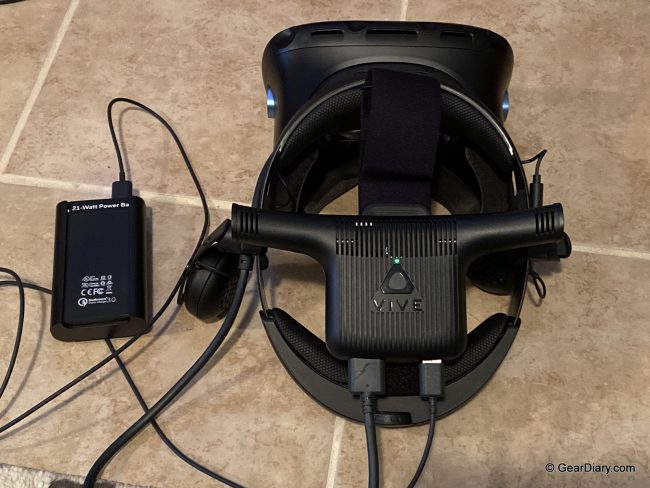 The wireless adapter on the headset

HTC was kind enough to send me a wireless adapter for testing. While my CPU wasn’t powerful enough to compress the images fast enough for wireless transfer, I could tell how freeing the wireless experience would be. The technology is fantastic, using Intel’s WiGig technology, you can get a near-zero latency VR experience without wires, as long as your CPU can handle the additional compression load. The wireless adapter comes with a USB battery pack that you can clip on your belt or put in your pocket. The battery pack will allow you to play for up to 2.5 hours before needing a recharge. My only complaint would be that the battery pack wire is slightly annoying handing down from your head, but I’m sure there’s a way to do some “wire management” to get it out of the way a little more. 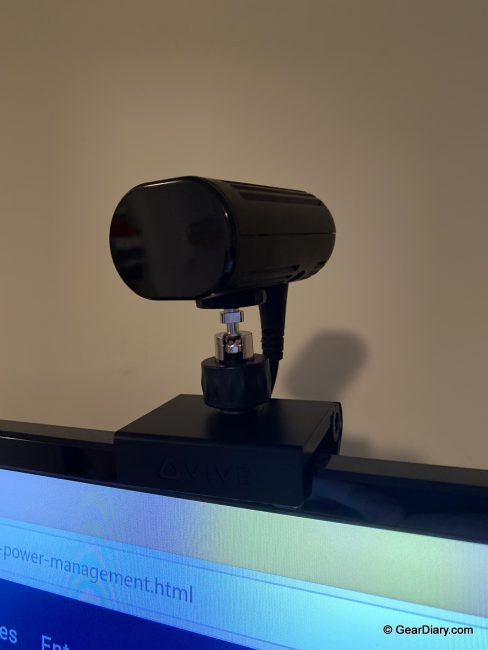 The WiGig transmitter on top of the TV 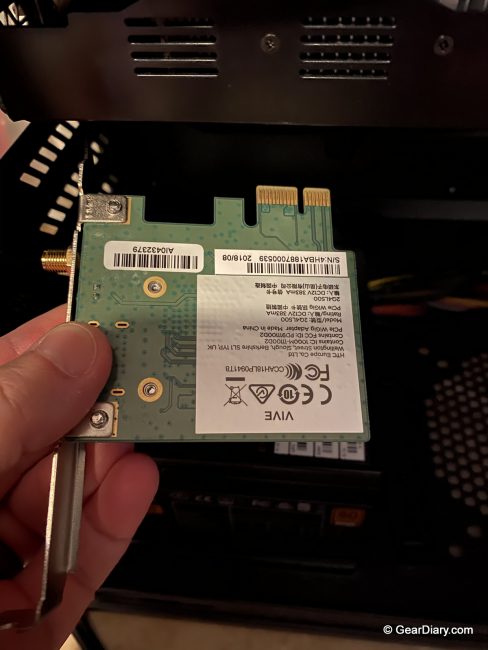 Installing the WiGig card in my PC

The Vive Controllers are fantastic. They fit great in my hand, the thumb trackpads are easy to use, and the tracking of the base stations feels super accurate. There are grip buttons on the sides of the controller that mimic the feel of “grabbing” as well as a trigger button for the index finger. There are lanyards on the bottom of the grip that can be attached to your wrist, allowing you to play without fear of tossing a controller by accident. I have hit the ceiling of our basement a few times, but that’s no fault of the controllers. The controllers are charged via micro-USB, and the system comes with two cables to keep your controllers charged at all times. 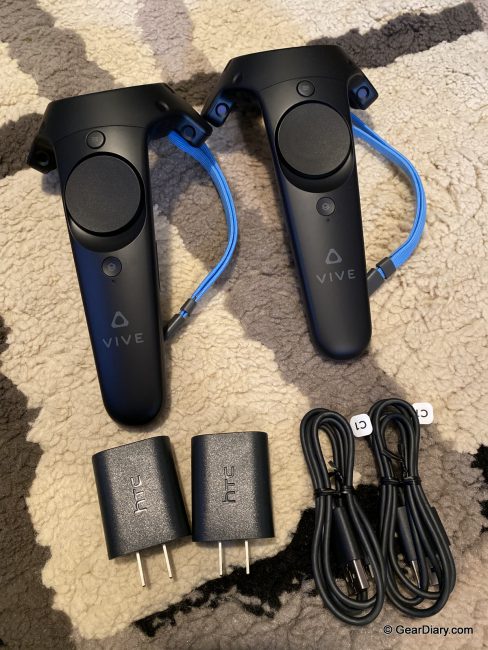 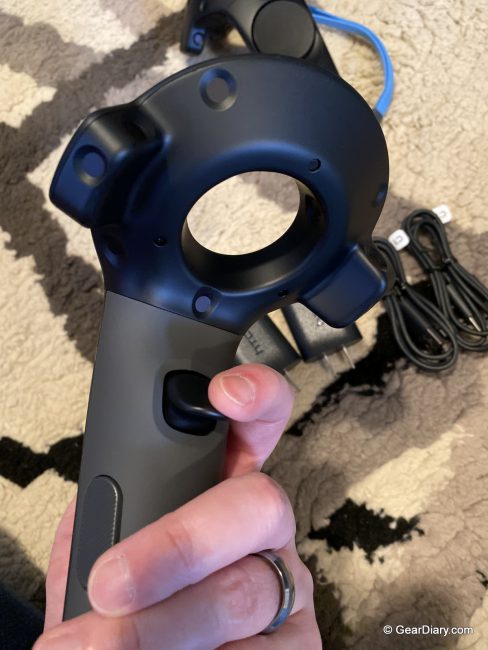 The rear of the controllers

The base stations are small cubes that need to be installed above head height and about 15′ apart diagonally across your room. They’re simple to install, needing just two screws to attach each included mount to your wall. You can use camera tripods as well if you do not want to screw into your wall. These base stations cover your entire play area and are what track your head and controller movements. Tracking is essential to create an immersive experience. Just imagine if the tracking was inaccurate and didn’t follow your movements exactly; it would “break the fourth wall” and dissolve any of the suspension of disbelief that had been built. It would bring you back to reality, and that’s not what you’re looking for in a VR system.

I’m happy to report that the HTC Vive Base Stations do an excellent job tracking and, besides for a few minor CPU-related issues where games glitched, I witnessed no problems whatsoever with the tracking. I was able to fully immerse myself in the virtual reality environments, even scaring the sh*t out of myself a few times playing Half Life: Alyx. 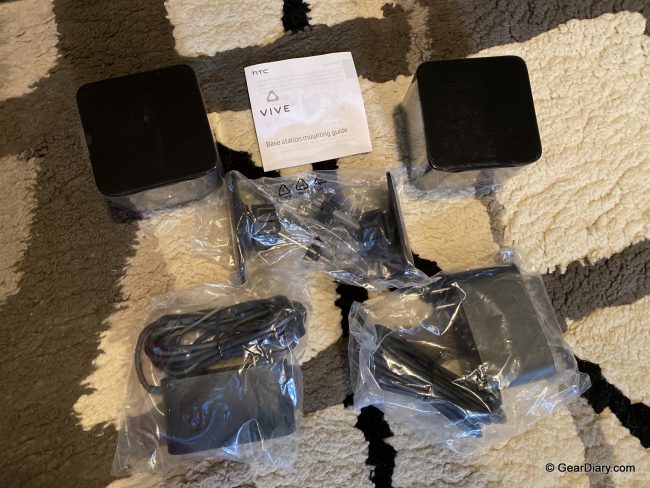 The base stations and included mounting accessories 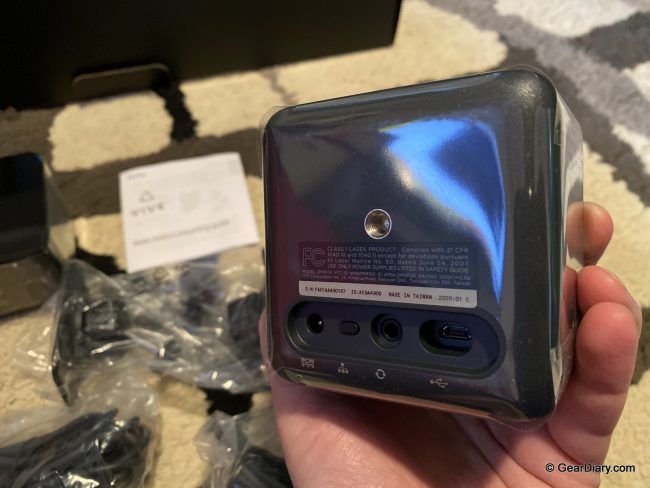 The rear of a base station 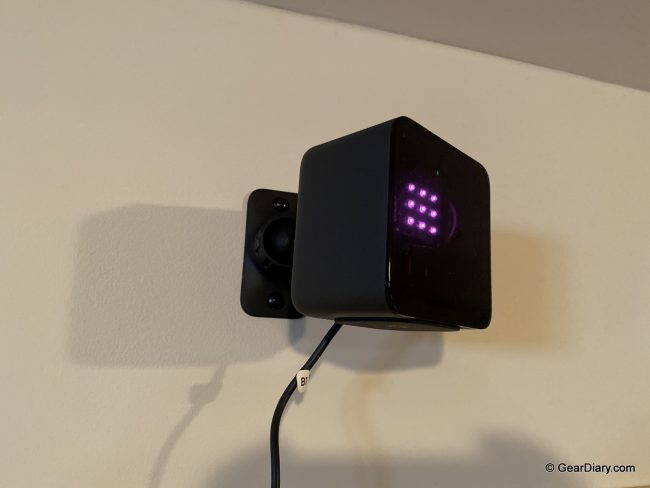 The base station mounted on my wall

As I’ve alluded to, my PC does not have high-end specs for 2020. It’s a four-year-old Maingear VYBE gaming PC that was great for an entry-level VR gaming PC back in 2016 but now falls below the minimum specs for Half Life: Alyx. Other than the fact that the CPU isn’t powerful enough to successfully utilize the wireless adapter, however, I’ve had an excellent virtual reality experience, even while playing high-quality games like Half Life: Alyx.

Half Life: Alyx is one of the first AAA games that makes full use of the intricacies of virtual reality while incorporating amazing graphics, a great storyline, and realistic-feeling controls. Because of this, the minimum recommended PC specs are fairly high. Every time I boot up the game, I get a warning before starting that my computer memory is below the recommended minimum. However, I have had very few issues playing, except for when there is a ton of action on-screen, and even then, it’s a short glitch. The HTC Vive Cosmos Elite has been fantastic for this and many other games, even more, fast-paced games like Racket: Nx and even Echo Arena using Revive. 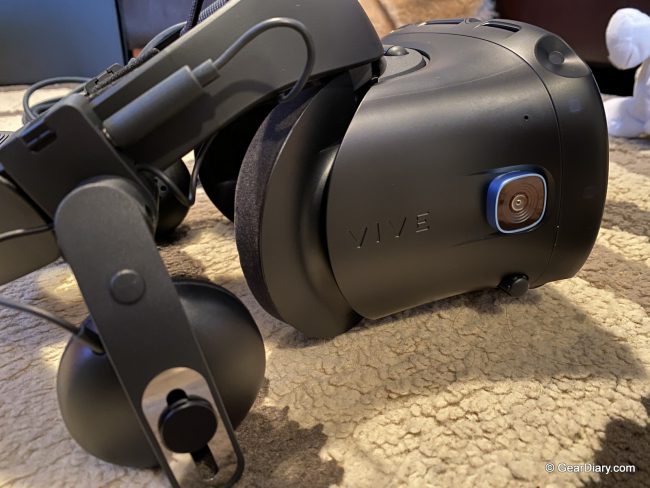 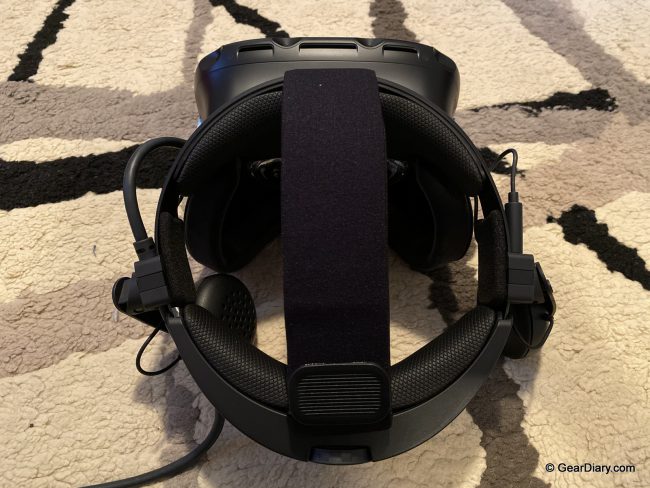 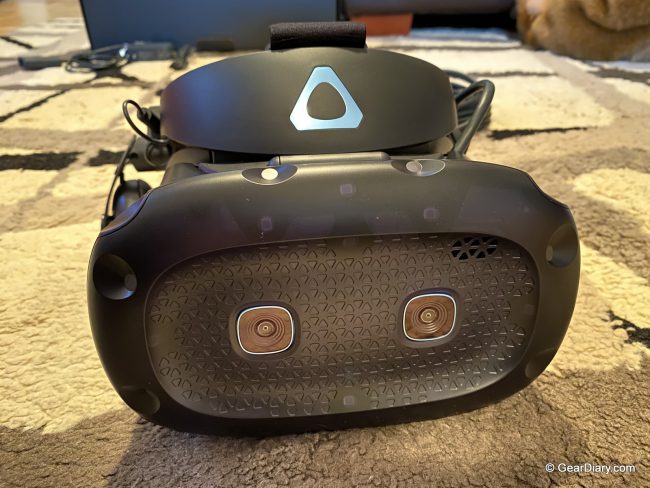 Thanks to the excellent tracking, playing sports games feels supremely natural, unexpectedly so. The tennis racket or baseball bat feels like it’s exactly where it’s supposed to be, which enhances the experience and makes it feel more real.

The graphics quality is good, though not the same as what you may be used to seeing if you play in 4K on a gaming monitor. My biggest complaint was that even though there were digital adjustments that could be made, I never felt I could get the display close enough to my eyes to make it as clear as I’d prefer. This didn’t affect my enjoyment of the virtual reality experience, however.

I’ve been converted to a VR gamer thanks to the HTC Vive Cosmos Elite. The combination of the comfortable headset, great controllers, hi-def display, adjustable, stereo headphones, and excellent tracking makes for a fantastic experience. When paired with a great game, the virtual reality experience feels life-like. The HTC Vive Cosmos Elite will give you a great escape, albeit a virtual one.

You can get your HTC Vive Cosmos Elite and wireless adapter directly from HTC at www.Vive.com.

What Needs Improvement: Likely due to flip-up HMD, I couldn’t get the display to stay close enough to my eyes.