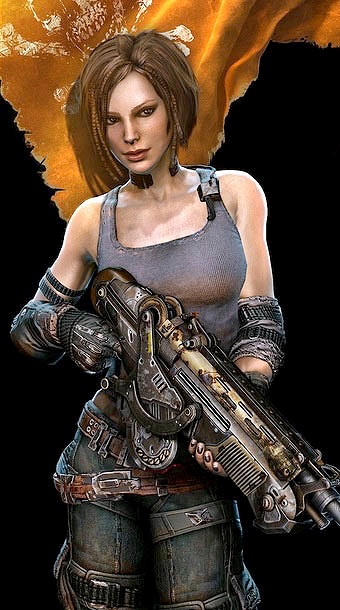 Everything is fast and violent, which accurately reflects these characters’ situation – stranded. There are some positive among the attacking mutants, plants, and giants monsters. A girl name is Trishka “Lovely Bitter” Novak, voiced acted by Jennifer Hale, who keeps up with the boys in fighting and foul language. The game does not take itself too seriously with lines like “Another racial slur and I will hurl you into that storm.”

The over-the-top combat moves and weapons are more than any normal person could handle – the perfect entertainment escapism scenario. The replay value hits high marks with awesome weapons amid a unique “skillshot” system. Players who know the moves get the rewards.

Revenge is sweet…and fun with the skillshot system, but these specialties overtake the story which limps a bit near the end. Orchestrating these manic motions and completing missions represent the main gameplay challenges. Item collection is on the low end year and often simplified with metallic, shiny visual prompts.

The environments provide realism and depth while musical score composers Krzysztof Wierzynkiewicz and Micha? Cielecki enhance the action even more. This highly recommended game is also available on PC and Xbox 360.

This Limited Edition (also available on PC) includes 25,000 experience points, Peace Maker Carbine, leash upgrades, bonus online game mode content, and special gear. The Bulletstorm Epic Edition is available on Xbox 360 and includes these same extras plus exclusive access to the Gears of War 3 multiplayer beta. Gamers who made pre-orders at GameStop get in on the fun this Monday, April 25.

Check out the dialogue scene after the game credits. It would be interesting to see an outside-looking-in type character join the mercenaries in a possible sequel from the development team (Epic Games, People Can Fly, and Electronic Arts). Expanding insight of this futuristic world from a different perspective would be a welcome addition.

Where to Buy: Amazon and many other stores

OneAdaptr OneWorld 65 Review: With 6 Different Ports, This Could Be the Only Travel Adapter You Need to Bring

WalkingPad A1 Pro Foldable Under Desk Treadmill Review: Walk While You Work and Enjoy a Healthier Day!

The TCL Tab 10 5G Will Keep You Connected, Productive, and Entertained on the Go

MediaTek Connects and Entertains You with New 5G and Smart TV Chips!