We’ve looked at a number of in-ear earbuds over the past months. There were the Yurbuds that won over Elana’s heart. (Okay they didn’t win her heart but they are the first earbuds she actually likes wearing!) Then there were the earbuds that took a shower with me. Yup, these new Monster Sport headphones sound great and are machine washable too!)

Today we’ll take a look at Skullcandy’s new FIX in-ear earbuds. Like the Yurbuds the FIX earbuds are designed for people who are on-the-go and active. As the company explains, “Until now, some ear buds and in-ear speakers have suffered from the same problem – with rigorous activity they fall out.”

So let’s take a look at them. Before we do however here’s a riddle.

(You didn’t think we would answer so fast did you? We’ll get back to the riddle shortly.) Skullcandy is proud to announce the release of its new proprietary in-ear speaker–The FIX. Until now, some ear buds and in-ear speakers have suffered from the same problem – with rigorous activity they fall out.

The FIX solves that problem and eliminates unwelcome soundtrack interruptions by resting comfortably on multiple points of soft contact with the ear. By removing the threat of falling earphones, FIX Technology offers uninterrupted, hi-fidelity aural performance.

The revolutionary design of Skullcandy?s FIX technology offers two key advantages: a comfortable, fixed in-ear fit and a unique, repositioned chamber for enhanced acoustic precision. The FIX has a proprietary ported chamber that delivers full-spectrum sound with deep bass, plus power and clarity to spare.

The FIX is the ideal headphone for athletes and audiophiles who listen to music on the go. The FIX headset comes with the earbuds themselves along with a nice zippered carrying case. Of course since these comes from Skullcandy skulls abound. The most noticeable skull sits right on top of the carrying case. To state the obvious, if you like skulls you are going to love the look. If you aren’t into skulls well… these probably aren’t for you. The earbuds come with one pair of inserts already in place. Inside the carrying case you’ll find both a larger and a smaller set. It is worth trying all three insert sizes to find the pair that are most comfortable for you. This is especially important with these earbuds since it is the tight fit of the inserts within the ear canal that keep the earbuds in place during activity. As noted… skulls abound and can be seen on the outside of each bud. More skulls adorn the connection that merges the two earbud cables into the length of cable that leads to the 3.5mm plug. And yet another skull on the inline remote that contains the microphone as well as the volume up/down and the track controls. I made a few calls with the microphone and found the call quality to be good enough for every day use.

One of the key selling aspects of the Skullcandy FIX earbuds is their ability to stay in the ear during strenuous activity. As such they compete fairly directly with the Yurbuds. I jumped around with both the Yurbuds and the FIXs in my ears and found that both stayed put quite well. In other words you can’t go wrong with either earbuds if your main concern is having them stay put. One selling point of the FIX earbuds over the Yurbuds is the inline microphone and controls. The FIX has it. The Yurbuds don’t.

So back to our riddle.

At the start of this review I asked, “How are headphones like wine or scotch?”

The answer is simple- once you taste the good stuff it is hard to go back.

That kind of wraps up my thoughts on the FIX earbuds. They are decent, stay in place and have all the controls you want. And they do all that for under $70. “Decent… but not great” is the key here. I found the sound coming from them to be a bit thin and not nearly at the same level as some of the more expensive earbuds and headphones we have reviewed. (For example, the Monster iSports or the Future Sonics Atrios both sound better. Then again, those earbuds are almost three times the price.) At the same time, I do like the FIX earbuds more than the YurBuds we reviewed and recommend them for anyone who doesn’t mind in-ear headphones that fill your ear canal. (If, like Elana, you DO mind something in your ear canal the Yurbuds are still the way to go.)

Finally, if you don’t like skulls stay away. If you do like skulls get ready to order these earbuds as soon as they become available.

The FIX is available in both in-ear and ear bud models for $69.99 and $39.99. For more information about the FIX or any of Skullcandy?s products, visit www.skullcandy.com.

What I Like: Stay in during activity; priced under $70; include nice carrying case; has in-line mic and controls; sound decent

What Needs Improvement: You have to love skulls to like these; sound okay but not GREAT! 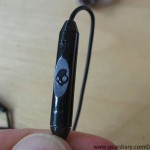