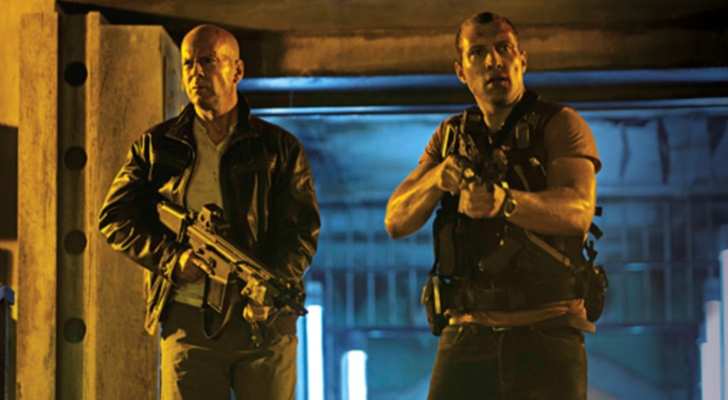 A Good Day to Die Hard

References including Ronald Reagan and cowboys are meant to pay homage to the film series, but only remind audiences how the plot needs more tension and genuine exhilaration plus a high level actor like Alan Rickman to play the main antagonist. Even one of Die Hard’s dialogue lines “Shoot the glass” extends into an action moment familiar to diehard fans of the film series.

Since this A Good Day to Die Hard does not equal the genuine emotion and tension of the first film, this latest installment does its best to emulate key moments with a highly entertaining tone featuring nearly perfect stuntwork, vehicles chases, and carnage filled explosions.

The car chase, set in Moscow’s Garden Ring, involves several impressive vehicles including custom-made MRAP (Mine Resistant, Ambush Protected). Common cars that fall victim to the carnage include a helpless blue hatchback in an outstanding slide down the road. This outstanding sequence is only slightly diminished by a little jittery camera work instead of a smoother action flow.

The special effects blend seamlessly into the non-stop action as Bruce Willis returns to play reluctant hero New York City police Det. John McClane who travels to Russia to check on his son Jack, played by Jai Courtney, after a personal falling out. Audiences know John will have to win his son back as well as the war on the “scumbags”.

Jack and John’s personal relationship builds the mutual respect of their physical prowess and talents. Jack’s dialogue gives audience’s minimal glimpses into his activities (e.g. where to find weapons, etc.) and his Russian intelligence level before he and John enter battle … audiences can quickly ascertain Jack (a.k.a. The 007 of Plainfield, New Jersey) can violently handle any adversary.

The action initiates from a worried dad not a cyber terrorist act, which enveloped the previous installment Live Free or Die Hard and took McClane out of his comfort zone. “He could never get out of his own way,” says John about Jack, as father fears the worst for his son. One antagonist could exploit John’s personal knowledge, but, surprisingly, filmmakers never open that plotline.

The plot takes unpredictable turns in the beginning as Russian power politics come into play and father and son must team up to defeat the Russian antagonists. Screenwriter Skip Woods (A-Team, X-Men Origins: Wolverine) keeps the settings and hardware gritty while setting up the action in familiar places. Woods also shapes one key sequence on a recognizable Russian historical event – an uncreative path that simply leans on audience knowledge.

Woods also generalizes the overall situation with dialogue like “things work differently there”…from one of McClane’s fellow New York officers who the audience must assume has credible knowledge in Russian law enforcement. Filmmakers totally minimize the role of Russian law enforcement in this film, so McClane only banters with a cab driver outside the core group. No chance for a Sgt. Al Powell-type character addition of a Russian law enforcement officer, especially this outing is definitely a family affair.

Audiences also get Cole Hauser as Collins who assists and Mary Elizabeth Winstead also returns for a small role as McClane’s daughter Lucy, but only at the beginning and end. Maybe audiences will get Bonnie Bedelia, John’s ex-wife Holly, in the next installment.

Another Russian family connection progresses the plot, but also has potential to become something more. German actor Sebastian Koch plays Yuri Komarov, or as John quips “Papa Gapetto”. Another bad guy named Alik, played by Rasha Bukvic, also provides an additional comic target for the McClanes. Unfortunately he is so forgettable John even asks another character to identify him…and yes there are “grandpa” barbs thrown at Willis as well. Yulia Snigir plays the sole Russian female Irina.

Willis’ one liners are occasionally drowned out a bit by gunfire as the plot uses breaks in the action for some decent dramatic moments. In one poignant scene John confesses how he thought working long hours was “a good thing”, but it didn’t help much in his personal life.

The gritty Russian settings at the end already look like destroyed while filmmakers create an amazing sequence and ultimate camera shot with 25-ton helicopter and two characters. None of the sequences feel staged as filmmakers pepper the plot with humorous asides and a few bits of no-nonsense dialogue. Marco Beltrami’s musical score underwhelms and only contains a few recognizable string pieces from Michael Kamen’s score from the first film.

A Good Day to Die Hard lacks the tension and pure exhilaration that makes the whole experience more meaningful, as filmmakers largely fill the screen with carnage instead of taking more risks in the plot and character development while keeping the audience pleasing franchise elements as Skyfall and Mission Impossible Ghost Protocol did.

This approximately one hour 37 minute film come recommended with reservations and rated R for language and intense sequences of violence, gore and action. Yes, John says “Yippee ki-yay m****er-****er”, and filmmakers leave the ending open for a sequel. The original story concept of the beginning film in this worthy film series was based on an article by John Carlin titled “A Farewell to Arms”.