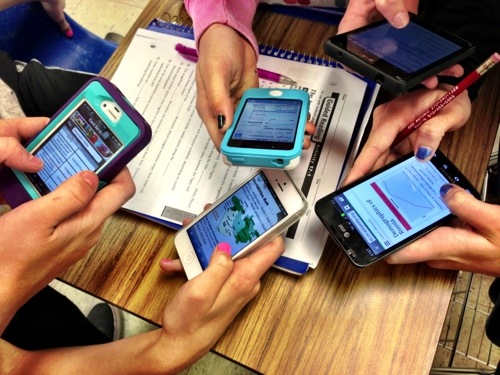 When I began teaching, no students and few teachers had cell phones. Most of the classrooms did not even have internet and everything was accomplished with books, pen and paper. Of course, as of late, every student has a phone. In fact, in my current classes, every student but one has either an iPhone or an Android phone. As phones began to become more prevalent, it was a constant battle making sure they were turned off and never in sight; this was a cat and mouse game that drove teachers and administrators to their wit’s end, although as long as the kids were not using them, I never go too worked up over seeing them.

A couple of years ago, I was reviewing a class for state standardizing testing and had just reviewed Ace Flashcards. I decided to let my class download any app they could find and begin making their flashcards on their phones. Permission had to be granted from the principal, and I had to monitor them closely as they worked. Before long, the students were using those apps for all of their courses, and they were raving about how convenient it was. This practice has continued in my class, and it has become the standard for all of my students.

This school year, I have found a lot of great lessons that require group participation and research; while this is fantastic, both computer labs are occupied during my classes. I decided last week to have the kids get their phones out so they could do their group research over Russia and the republics. In just a few minutes, the room was full of quietly working students … and then I heard the distinctive beep of Siri. The student said, “What is the birth rate of Romania?” Siri said she would find that and the group gave a collective, “yesss!” A few minutes later, the entire room was beeping with kids talking into their phones. The room became a frenzy of work. After the lesson, one of the students told me how awesome that was and they learned so much about their assigned country.

I now have a new way of incorporating what used to require a trip to the computer lab into any of my daily lessons. Hopefully we are able to move our classrooms from a battle zone against mobile computing to a place that embraces and uses the opportunity before us. Why avoid enriching activities due to computer availability constraints, when almost all of the students have the technology in their pocket?

For those wondering, when I let them use their phones for class, I have never encountered a problem with usage. Granted, we have great kids, but maybe giving them a little trust and responsibility also helps to bring great results. In the future I plan on allowing students with tablets and laptops to use WiFi to stay connected during class.