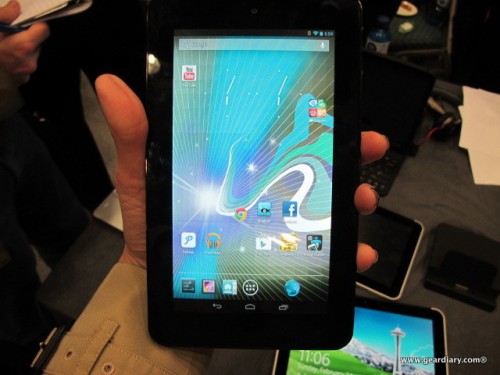 HP’s journey into tablet-dom didn’t turn out all too well the first time. Sure their tablet running WebOS gained some traction, but that was only after they dropped down to fire sale prices. Well Mobile World Congress in Barcelona just saw HP announce their return to the tablet market. This time out HP is going with the time-tested Android operating system and the budget price of just $169. Will they have a winner on their hands? Only time will tell.

The HP Slate7 promises to be an affordable Android Jelly Bean tablet sporting a sweet spot 7″ diagonal screen. Designed to be taken any and everywhere, the HP Slate7 weighs in at just 13 oz. Priced at just $169 when it is released in April, the budget tablet sports a few features that aren’t quite as budget as you might expect. For example, the HP Slate7 is the first tablet with embedded Beats Audio. The company promises the “best-sounding, richest audio experience available on a tablet” but we’ll wait to judge that for ourselves. Better still, the HP Slate7 is a true Google tablet and brings access to such Google services as Google Now, Google Search, Gmail, YouTube, Google Drive and Google+ Hangouts for multi-person video chat, as well as access to apps and digital content through Google Play.

As you might expect, the HP Slate7 isn’t a cutting edge powerhouse tablet. Then again, at under $170 no one should be surprised. Still, the specs aren’t exactly bad either. It is powered by an ARM Dual Core Cortex-A9 1.6 GHz processor, has a 3PM camera on the back and a front-facing VGA camera. And while this tablet is likely going to be a better fit for media consumption that actual content creation it will ship with HP’s ePrint application pre-loaded.

The HP Slate7 looks like an interesting addition as the budget tablet war continues. We’ll look forward to getting our hands on one when it ships in April. You can learn more here.