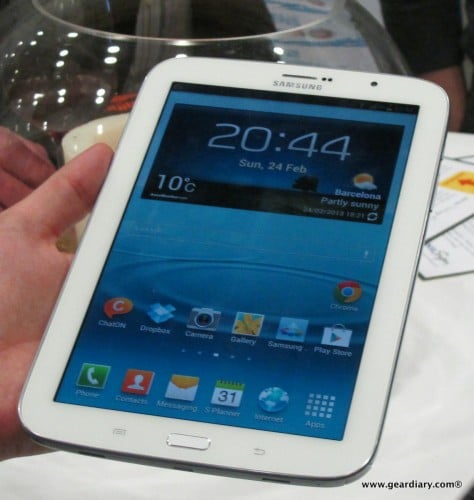 For the past few weeks I’ve been using a Samsung GALAXY Note 2 on and off. I’ve been quite surprised how impressed I am with the huge phone/diminutive tablet. Sure, it’s a bit too large and clunky to really qualify as a phone but, after using it for a while, it actually doesn’t seem overly large. It has a huge beautiful screen and I am absolutely wowed by the S-Pen. Mike didn’t love the Note 2 and was critical of the limited number of apps that work with the included pen. I’m not nearly as troubled by it. No, my issue with the Samsung GALAXY Note 2 is that it is NOT large enough. No, I actually want a GALAXY Note that is more tablet than phablet (phone/tablet). Well that is exactly what the Samsung GALAXY Note 8.0 offers. The Note 8.0 lands between the Note 8 and the Note 10.1 in size and offers a host of productivity features that will be quite attractive to the mobile worker. Let’s run down some of the features the device will offer.

GALAXY Note 8.0 ships with Samsung’s multiwindow functionality built in. This is a terrific productivity “tool” that is on my Note 2. the difference here is that the larger screen of the Galaxy Note 8.0 really lends itself to the split window approach far better. Yes, the number of applications that support this feature is still rather limited but that will change rapidly in the future. The tablet will ship with Samsung’s suite of S note tools and templates which allows you to create, edit, manage and share documents, pictures and much more. And adding value to the device, it will ship with both the Flipboard and Awesome Note applications built in. The Samsung GALAXY Note 8.0 also includes the recent Air View technology. This means that the S Pen simply needs to hover over a screen in order to let you access previews of videos, pictures, emails and appointments.

Let’s run down the specs of this latest entry into the Samsung GALAXY universe of devices. The Samsung GALAXY Note 8.0 is running a 1.6 GHz 89 quad core processor (wow!) and has an 8 inch display with the resolution of 1280 x 800. It has a five megapixel rear camera and a 1.3 megapixel front facing camera for video chat. It offers Wi-Fi 8/B/G/N on both the 2.4 and 5 GHz bands. It has Bluetooth 4.0 built in but is only running USB 2.0. It supports Wi-Fi direct and has a digital compass and accelerometer built in. The battery capacity is 4600 mA hours. What that means for run time will have to be seen in real-world testing. The device will ship with android 4.1.2 – jellybean – and a host of built in applications that will have you up and running in no time. It has 2 GB of RAM, comes in 16 and 32 GB versions and you can add a microSD card of up to 64 GB for added capacity. And yes, at least the European version of the tablet will also be able to make phone calls!

Samsung has not yet announced pricing or availability of the Samsung GALAXY Note 8.0 but will be keeping our eye out for it.

Let’s close this post with a bit of our Editors’ Chat about the Samsung GALAXY Note 8.0.

Dan: Hate to say it but the digitizer pen is a killer feature and could make this very attractive.

Carly: So you are liking the galaxy note as well?

Dan: Yes but it is too small for real note taking. This is the perfect size.

Carly: Interesting. So the note taking is too gimmicky on the note? Is it too big to be phone like?

Dan: No it works but it is cumbersome. Nice device but it really does end up being a bit too much of a tweener on all fronts. Too big for a phone. Too small for a tablet. Great if you want both but only want to carry one device but I’m not into that kind of compromise these days.
Mike: I was not a fan of the Note 2 as I noted in my review.  Too gimmicky, because it is really focused around a few Samsung-only apps and not all that useful outside of them.  Sure you can use it, but unlike older stylus-based PDAs, the operating system is not stylus-based, so you lose some of the benefits of a stylus-focused OS. But I think the 8 might be better … but it is considerably larger than the iPad Mini, meaning you lose some of the one-handed usefulness.
Judie: I believe I’ll stick with the mini. =P