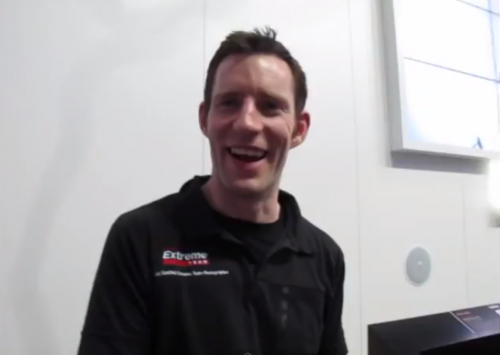 This is David Newton, a photographer who works with SanDisk on their ExtremeTeam

While at Mobile World Congress, we had a meeting with SanDisk. Going in, I wasn’t sure what was going to happen: would they pull out a bunch of thumb-drives and mini memory cards to show us their latest consumer designs as they had done several years ago? Or would we find something completely new to discuss? As it turned out, my meeting was with Yoram Zybergerg, the Senior Director of Embedded Business with SanDisk, so a good part of our meeting focused on the OEM side.

Yoram’s excitement about the limitless possibilities of flash memory — now and in the future — were very evident. He mentioned how SanDisk is used as the flash memory in many consumer devices, and how most consumers will never be aware that the reason their device is so fast (or runs so well) isn’t only because of the processor they happens to have, but also because of the operating system their devices are running and the speed of the SanDisk flash memory inside. For example, one of their most recently announced partnerships was with NVDIA; SanDisk’s iNAND Extreme Embedded Flash Drive (EFD) is “optimized for use in the tablets powered by Tegra 4”, and it will enhance “processing performance [while] providing reliable, high-quality digital storage.”

SanDisk is celebrating their 25th anniversary; I asked Yoram if there was one thing he wanted Gear Diary readers to know with regard to that, and he said that he we should know that SanDisk never stops looking for ways to being faster and better memory options to consumers. I can’t help but wonder what we can look forward to in the future, considering that in 2006 a 2GB microSD card cost $99, and now we can buy a 64GB microSDXC card for $60 or less on Amazon.

When I left the meeting, I was introduced to David Newton, an independent writer and photographer who works with Sandisk as a member of their ExtremeTeam. I filmed a video of him talking about SanDisk and his experience with their flash memory. Perhaps the most interesting thing for me was learning that the memory card can actually make your camera perform better:

David’s got one of the most awesome gigs in the world, don’t you think? And it was really cool to hear his candid thoughts on SanDisk memory. As for me, I’m content with my 64GB SanDisk Mobile Ultra MicroSDXC Memory Card in my Android device, but maybe it is time for me to upgrade the 8GB SanDisk SD card in my Canon G11 or the 16GB SanDisk Compact Flash card in my Canon 5D. I’ve certainly never had issues with the cards I have, and there are times when their size seems a bit restricting …