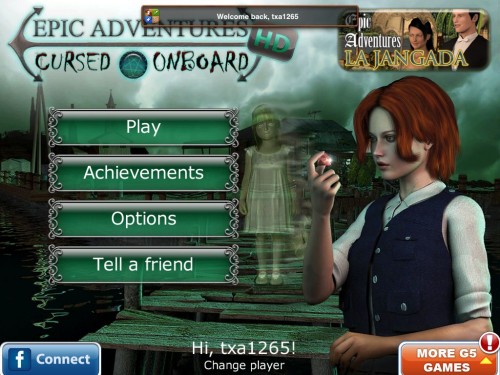 I reviewed the original Epic Adventures: La Jangada here, which was based on the Jules Verne’s story ‘The Raft’ (direct translation of La Jangada). My opinion of the original was that it was an interesting story but hampered by glacial pacing and a dreary palette. Does the sequel Epic Adventures Cursed Onboard deliver where the original failed? Read on and find out! Major features: Unfortunately nothing I criticized improves in the ‘sequel’, and in fact the problems only become more glaring.

But let’s start with the good stuff. Technically Epic Adventures Cursed Onboard is very well done. The graphics look excellent, there is full voice acting with animated characters as they speak, and the music relates to the scene and there are well-done and haunting sound effects. Also, the touch mechanics work perfectly, as the game recognized everything I tapped perfectly without a single frustration.

Epic Adventures Cursed Onboard starts with some promise, with you playing as Melissa Alan assigned to look into the sudden discovery of the ship named Jangada which last sailed in the 1970s but was never heard from again. No one who has searched for the ship has returned, and when you first arrive you are greeted by haunting sounds, creepy messages … and a ghost.

As I say it is a promising start, but it feels like the developers stopped at a solid opening and a sketch of the rest of the story – because that is pretty much what happens. Because unlike even the first game, after the first few minutes you are just moving back and forth from location to location engaging in one hidden object screen (HOS) after another. Whenever you need to find something, you will step into an area and see some sparkly objects to tap which open the next HOS. That in turn gives you an object that will help you get past the next roadblock and into the next area and … you guessed it, on to your next HOS!

In fact, it felt like nearly a half hour playing Epic Adventures Cursed Onboard before I saw my first puzzle, and after I was done I was disappointed. It was a telephone with only two numbers shown out of five, without any indication that I could somehow learn the correct numbers any other way than random guessing. So I sat there dialing (yes, dialing … and as someone who grew up in the pre-touch tone era – spinning the dial holds no nostalgia for me), and running through about 25 combinations before finally getting the right set of 5 numbers was no fun, just frustrating.

As mentioned the issues with the original game remain – slow pacing, bland palette, and too many of the hidden object screens were just random places filled with random objects where you sought things that made little sense. In the wake of so many well-done procedural crime drama hidden object games, I found myself too often bored and frustrated and used the hint button earlier and more often than I have since … well, I can’t really remember.

Ease of use/Overall performance: As I mention, this game is excellent in terms of getting in and getting stuff done. Taps are always smoothly recognized, and everything flows smoothly. From the start of the game you are instructed on how to play and accomplish tasks, so you never feel lost.

Would use again/recommend?: Not really! Compared to so many other genre games this one just falls flat – huge download, slow-pacing, forgotten story, and so on. If you were a huge fan of the original Epic Adventures: La Jangada, download this and check it out … but otherwise feel no remorse at letting this one pass. G5 has been on a roll with some fun game releases — but this isn’t one of them.

Price: Free download with in-app purchase of full version for $6.99