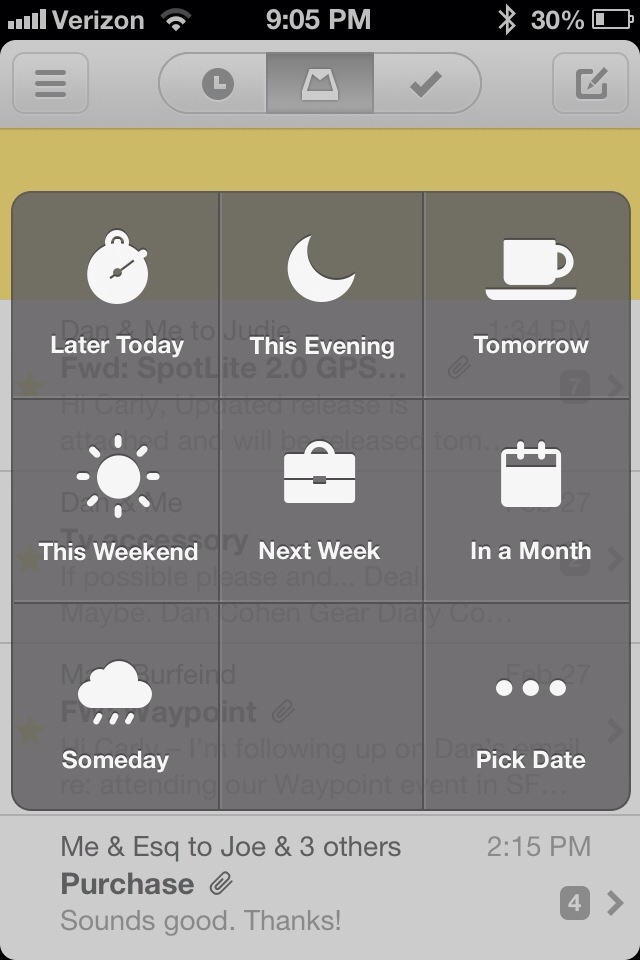 It has been a little over a week since I started using the Mailbox app as my main email organizer, and I have finally settled into a rhythm and have a handle on how it works. It’s incredibly easy to grasp once you get it set up, and I am still as smitten with it as I was last week in my first impressions post.

But here are the real question: is it worth the long wait to gain access? And is all the hype that’s surrounded it since before its launch justified? Read on for my take! 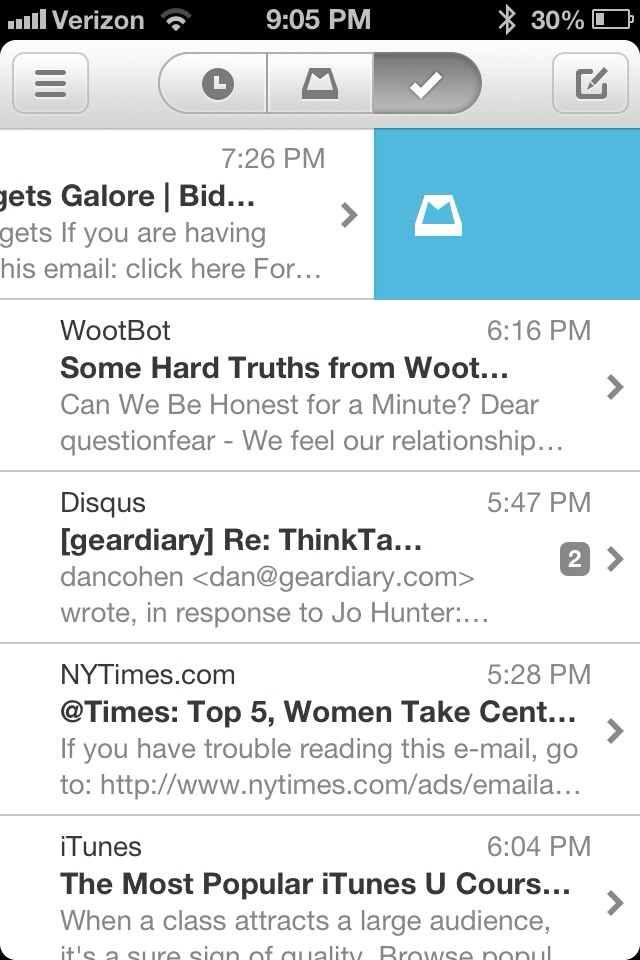 First, let’s go over navigating Mailbox. You can look at individual email accounts, but the app strongly encourages you to live in the unified inbox view. Unified inbox has a timer, inbox, and archived toolbar on the top, but in individual email accounts you can only access those items when you drill down into an email. The toolbar does make it really easy to navigate, though, since you can quickly peel ahead at emails that were snoozed for later, and if you accidentally archive something you meant to add to a list or snooze, it’s simple to retrieve it by hitting the checkmark icon. If you do need to un-archive, it’s as simple as swiping right to add it back to your inbox. None of the menus or commands are hidden, it’s just a matter of which way to swipe to activate them. 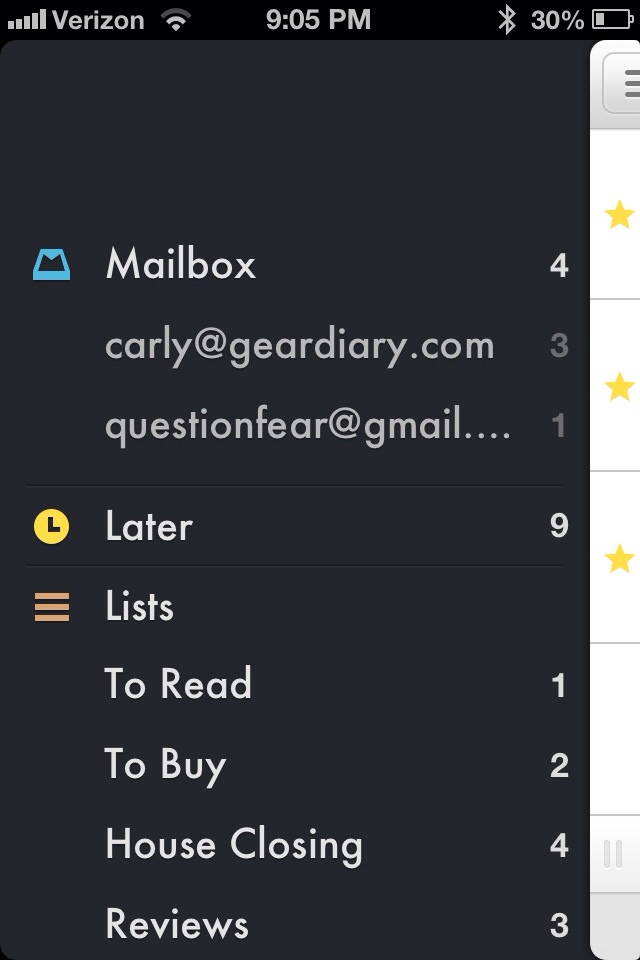 A few things make Mailbox nearly indispensable to me. I use email for past, present, and future tasks and projects. There are Gear Diary emails — like review requests, press releases, and upcoming events to coordinate. Then there are personal emails, which have been especially fast and furious this past week as we are about to close on a house purchase. Mailbox makes it super easy to fire through my emails quickly and organize them in lists, or set up timers for them to reappear when I have time to respond or deal with them.

Lists set up in the Mailbox app show up in Gmail as “Mailbox/Listname”, and emails for later appear as “Mailbox/Later”, so nothing is disappearing into the abyss of archiving. One cool feature: an email scheduled to reappear at a set time doesn’t just come back in the Mailbox app, it actually reappears as a starred item in your Gmail inbox as well. Very helpful if you’re on a computer or need to be in front of a computer when it’s time to answer an email.

Like all good things, there are a few downsides to consider as well. One is that Mailbox still has some kinks. A few times I have received notification of an email, but then the app fails to connect to download it properly. These little outages resolved themselves within 15 minutes each time, but it’s worth noting, especially if you need to see an important email in a hurry.

The other big downside is more personal than app-specific, but I have fallen into a procrastination trap a few times. First I snooze an email for later in the day. Then the next day. Then later the next day. You get the idea. This isn’t Mailbox’s fault, as it’s a personal flaw that I procrastinate, but just bear that in mind if you tend to push things off that Mailbox won’t magically solve that for you. Ideally, it would be great if I could tell Mailbox to only let me snooze an email X number of times like an alarm clock! 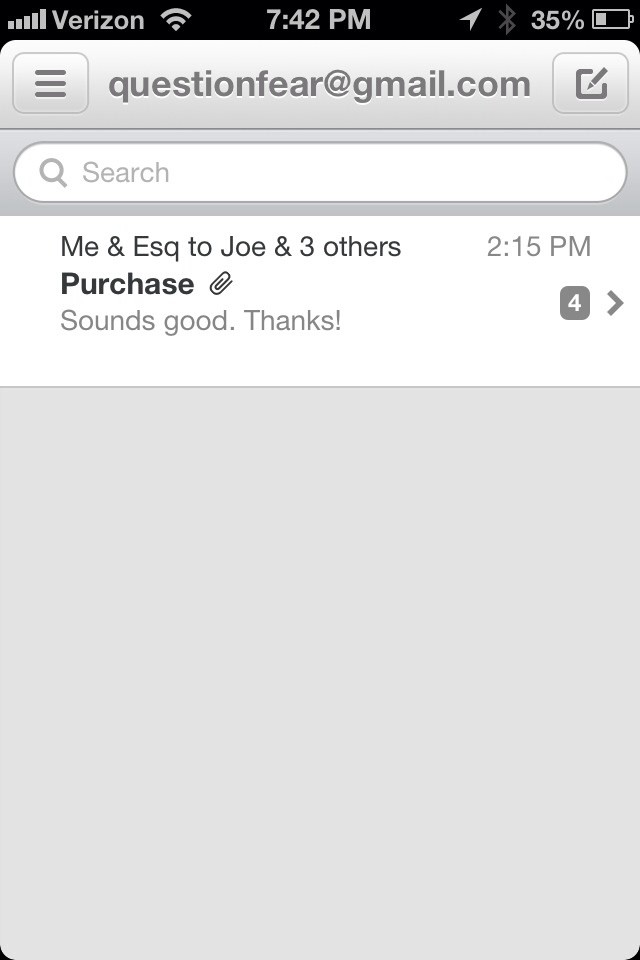 Despite the strong temptation to take procrastination to a whole new level, I feel like I have had much better control of my inbox this past week. Emails are being answered and filed away, and I am not leaving messages unread so I don’t forget to read them later. I’ve also been trying to implement Mailbox-style organization in my Outlook at work, and it seems to be helping my constant email crush there too. This isn’t the only way to conquer your inbox, but it does make it far easier and more automated. My biggest complaint: there’s no iPad version, and using the iPhone version blown up to full iPad size is not pretty. Hopefully they have an iPad version out soon, and in the meantime I am using the Gmail app on my iPad and Mailbox on my iPhone.

Should you rush out and get in line for the Mailbox app if you aren’t already? And if you are in line for it, is it worth the wait? If you use email constantly, juggle multiple Gmail accounts and need to keep one eye on several projects at once, I think it’s definitely worth using. It does take a few days to get your lists in order and find a rhythm with snoozing emails, but once you are past that it is dead easy to use, generally fast and stable, and one of the best ways I have seen to get and stay organized.

What I Like: Forces you to keep email organized; fast and simple to use; powerful options for snoozing, organizing and archiving emails.

What Needs Improvement: Could use a cap on the number of email snoozes; only works with Gmail and Google Apps domains; bugs and slowdowns can delay emails; iPhone only