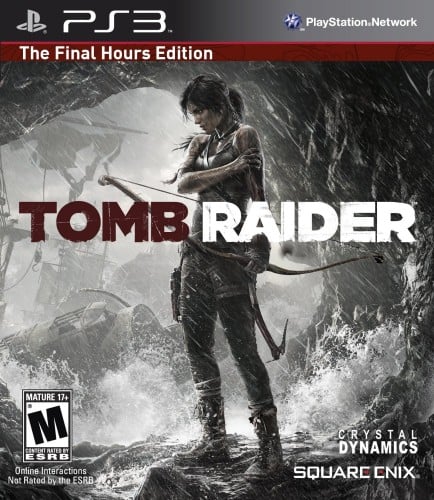 In Tomb Raider, adventuress/archeologist Lara Croft returns in her ninth video game…the first in four years. Was it worth the wait? Definitely. Developer Crystal Dynamics and publisher Square Enix push current consoles to their limit with this impressive reboot.

A Survivor is Born

When the first ever Tomb Raider game launched in 1996 it was a revolution. Outstanding in terms of graphics, gameplay, and storyline, it changed the way that video games were played and developed forever. Fronting the games assault on the world was the central character, Lara Croft. Lara was also to have an incredible impact, quickly becoming the most recognized and celebrated female action heroine and an icon for the video games industry.

This newest rendition of Tomb Raider explores the intense and gritty origin story of Lara Croft and her ascent from a frightened young woman to the hardened survivor that she would become known as. Armed only with raw instincts and the ability to push beyond the limits of human endurance, Lara must fight to unravel the dark history of a forgotten island to escape its relentless hold.

Players already know this young adventurer can survive the elements, which sets the tone for even more lethal challenges for her and other characters. The stakes are higher (hence the first time M rating), as Lara must act quickly or die. This vulnerable heroine gets a lot of firsts in this successful game as players get a potent potpourri mix with impressive variety and constant tension.

Developers create a smart game within itself as well as player failsafes. For example, helpful campsites spread out evenly across vast environments and no falls off ledges where backtracking would be a huge disadvantage. Players must be smart too and grab bonuses when first available.

The familiar single campaign expands thanks to the environments while the new multiplayer mode offers expanded gameplay within two character divisions.

“This is real. We’re not standing on a myth.”

Players get three save slots and choose among three difficulties (easy, normal or hard) before they navigate as Lara through a mysterious Asian island in the Devil’s Triangle. Actual elements supply a base for the story, which retains the usual learning experiences in the game series (geography, history, etc.). Developers progressively enhance the framework to fit a memorable original story.

Her antagonists are mainly all-male goons as Lara uncovers the lost Japanese civilization called Yamatai. Their actions and dialogue clue players into their motives – kill and destroy. These crazed enemies usually approach at a furious pace, which can be an advantage. For example, take note of explosive barrels, then quickly lure them to that spot. 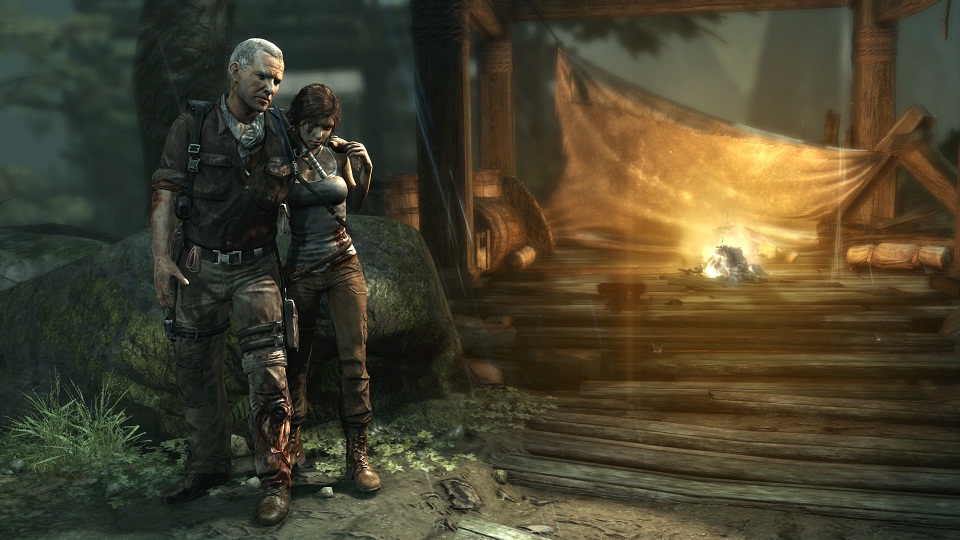 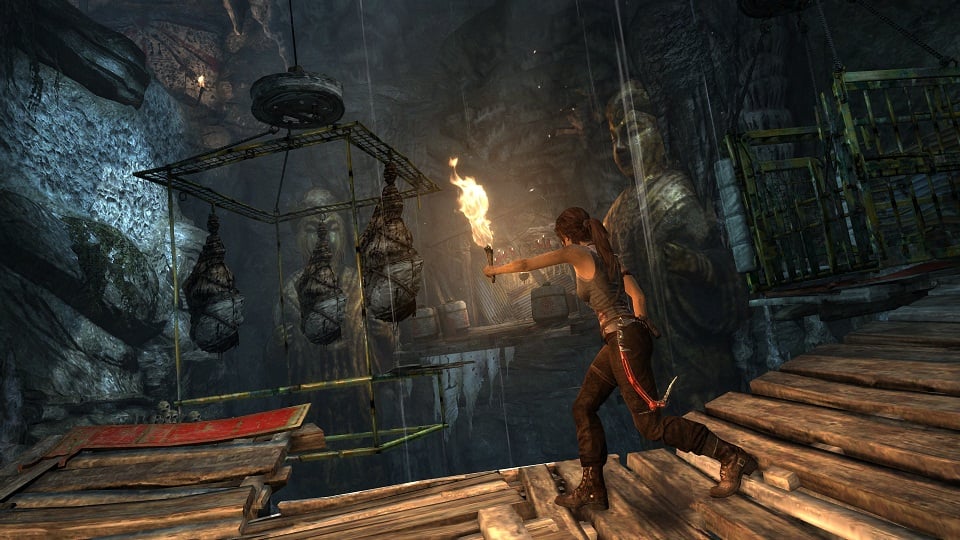 All these activities stem from Lara’s current dire situation so the actions are more meaningful. Players can pull arrows out and reuse them. Hunger becomes an issue at beginning, but blends into each mission instead of a constant status though Lara can eat from plants and other objects she finds. Lara can scrounge for resources, which progresses gear and weapon modification.

Camps are the sites for these upgrades, but are unavailable when danger is afoot. Again, take advantage before advancing to the next area/challenge. Players also can camp for options to travel fast through the large environments. Developers balance challenge and convenience well. For example, if Lara dies players don’t lose all their items before getting to a camp. 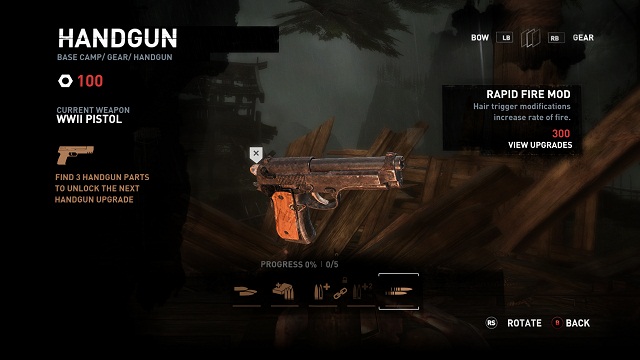 The environmental puzzles, ancient tomb searching, and general sense of discovery enhance when using the players analyze environments with the L2 button. This new features offers clues to progress while certain challenges also give players clues to complete challenges like reappearing usable items.

Developers incorporate several cutscenes and quick time events (QTEs) seamlessly as players only see a subtle “TR” in the lower right. In the QTEs, players get action cues where they must hit specific button (similar to the God of War games).

Players can always skip cut scenes using the select button, but players should definitely view them. Listen for special dialogue when panning to view certain environments. Players also get some helpful music cues and background dialogue for additional hints/insight.

All these activities combine with high production values for an amazingly cohesive adventure experience. Players experience the potential for danger at every turn with varied experience point gains. Travel options include jumping on zip lines to use and running the ropes using some nifty archery actions.

The challenging boss fights enhance the high-octane gameplay even more as players learn the most effective movements. The only notable combat snafu is environmental objects occasionally block the view when using the zoom option when the objects (e.g. trees) are located well behind Lara.  For example, when using the bow and arrow with trees behind the aim (L1 button) is fine but when zooming (R3) the tree leaves block my view.

Expanded combinations like fire arrows would be have been nice for special scenarios while the overall experience works well. The game automatically take action if necessary (e.g. lighting the torch when traveling certain paths, etc.) though most work is up to the player.

Lara also pries items with special tools, which also serve as a status meter. This female action hero automatically puts out her hand out to steady herself and squeezes through tight spots while players must be weary in their surroundings especially when starting fires. Character reactions, slow motion use, and rumble (controller vibrates) features are truly impressive. Collectibles give players a nice break among the action.

The new multiplayer mode features a casual or regular difficulty then up to 8 players can join in rescue, team deathmatch, cry for help, and free for all (minimum number required to begin). Rescue mode provides a different option as Lara races against scavengers to nab medical supplies though more modes are needed. Thankfully the upcoming add-on content will include three multiplayer maps (out March 19 – initially exclusive to Xbox 360).

The shadows and lighting are so great that it makes me want a quick turnaround option because I never know when something might come at me…even the deer gouge Lara, especially after a successful deer hunt. 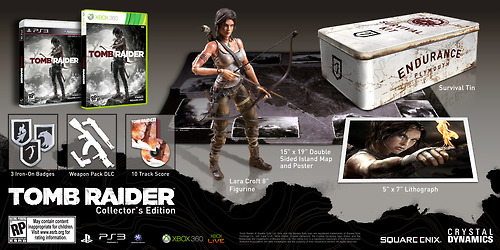