In my review of The Outer Worlds a few months ago, I noted that while the PC version was one of my favorite games from 2019, the Nintendo Switch port was a ‘hot mess’ of technical and performance issues that made it a hard game to recommend. 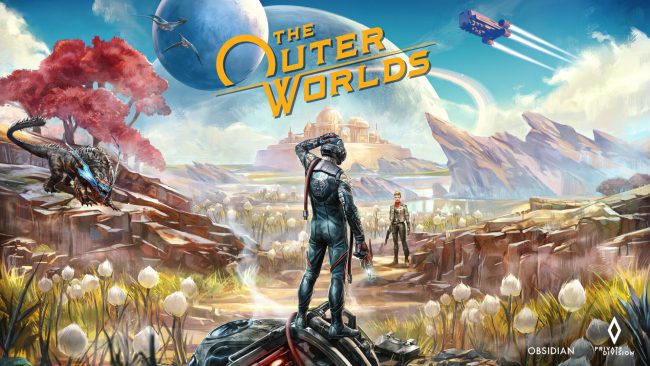 I have just completed another play-through, which I started just after the massive patch was released. I wanted to see how the patch addressed some of the core issues I raised in my review. These things were significant enough that I couldn’t recommend the game, but I was still able to enjoy playing through it. When the patch released I was hopeful that I would be able to start recommending the game as strongly to Switch friends as I already do to PC gamers. So let’s take a look:

General Graphics: – you will notice a difference from the very start of the game in the general level of quality in the graphics. As a PC gamer, my analogy would be switching the settings from ‘Normal Quality’ to ‘High Quality’. Everything pops, the colors are vibrant, and it just looks fantastic – I was amazed and it really got me excited to replay the game!

Graphical Details: – one common complaint that showed up as early as Edgewater was that you would see a sign for some place, but you’d have to be nearly on top of it before you could read what it said. With the patch, things have gotten much better, where there is now what would be considered a ‘normal’ distance associated with seeing signs. The overall ‘muddiness’ of textures is gone and you can truly enjoy each of the worlds you explore.

Overall Performance: – the original release suffered lag and frame drops on every planet, even with the diminished graphical quality and detail. When I saw how gorgeous the world was with the update, I feared the performance would suffer. So I was pleasantly surprised that the game played buttery smooth from start to the finale.

Pop-In Battles: – the one area that still caused me occasional problems was what I call ‘pop-in ambush’. When you are sprinting over a long distance through multiple high-detail areas and through a respawn zone, as the game catches up with rendering everything it seems to suddenly realize ‘oops, I was supposed to load in marauders right here’! So the game just pops them in all around you, leading to an ambush that would normally be easy but could end up wiping out your party and a bunch of progress.

So that is all pretty good news – not perfect but finally a game worth playing. But my struggle was recommending the game at the $60 price – fortunately for their Black Friday Sale, Nintendo’s eShop has the game for 50% off! At that price and with the new patch it is an easy recommendation!

Head to the Nintendo eShop and grab The Outer Worlds for $29.99!

And even better – here is a huge list of the games currently on Nintendo’s Black Friday ‘Sales & Deals’ page: