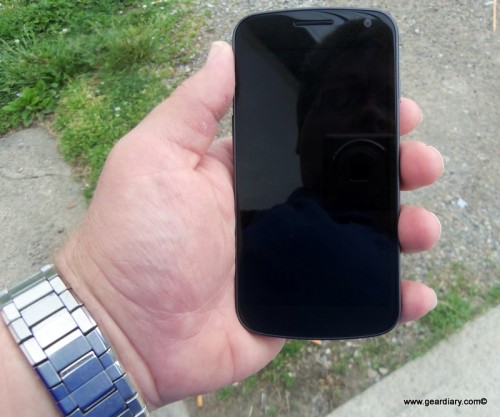 Verizon Galaxy Nexus users who don’t like to install custom ROMS on their devices are a lonely bunch, and are, too often, stuck with the version of Android that came with the original phone.  In fact, until recently  Verizon Galaxy Nexus users were still forced to use Android 4.1.1 or risk installing a custom (hacked) ROM.  A test release of an update for the Verizon version of the Galaxy Nexus recently leaked. I gave it a try and thought I might share my impressions.

The 4.2 version I installed updated the camera app and brought with it many new features.  Among them is Photo Sphere.  Photo Sphere is a new spin on panoramas that reminds me of what used to be done with Quicktime VR.  Once in Photo Sphere mode, you line up the circle with the dots and hold still until the first pic is taken.  Then you move up, down, left and right. The camera will snap a picture each time the circle hits a dot. Once you are done, you simply tap the shutter button and the device stitches the various images together in the background. From there the finished picture is saved to the Gallery. Tap the Photosphere button in your Gallery and you can pan around the panorama you just took. You can even post the finished product to Google Plus and allow others to pan through them with their mouse. Unfortunately this cool visual trick doesn’t work on Facebook. Upload to FB and the images will appear as a normal panorama.

So you can see what they look like by clicking here and here.  You should be able to see these if you have an account as they are public Google+ posts.

As noted, without Google+ the PhotoSphere looks like the above picture.  It is not a bad picture but when you view it as a PhotoSphere it has that extra….something! 🙂  Sadly, until these work universally across Facebook and other sharing site I don’t see them becoming massively popular.  It is also worth noting that while there IS a plugin for WordPress, it didn’t work properly with the version of WordPress we currently are running on Gear Diary.  Some day I hope! 🙂 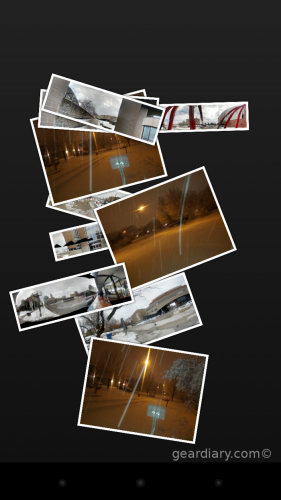 The update also introduced Daydream mode, a mode that let’s your phone “do things” while sitting in the dock or charging. With Daydream mode you can, for example, see news from Google Currents, watch a Picture Slideshow, see news from Flipboard and more.  For someone like me who does not have a dock for my phone this isn’t very useful but I can see the appeal of having an app like this automatically pop up whenever the phone is docked.

I’ll end this section of the post with this: Android’s spit and polish in the 4.X string of updates is wonderful.  The device is a joy to use and actually brings back memories of my G1 now.  The G1 got better with each update it got when I had it.  The same holds true for the Galaxy Nexus.  Every update I apply to the device makes it a much better phone as new features and refinement take a one year-old device and make it shine. The result of this, for which I am grateful, is that, one year in, I am still not wanting for a new phone… yet.  We’ll see if that holds up through the rest of my contract.

There’s really nothing noticeable in this update that is Verizon only.  This is a Nexus device so there is no added crapware on it.  Verizon did update the radio firmware and the transitions between each radio (3G, 4G and WiFi) are now much smoother.

Now on to the not so fun, or fun part depending on your point of view– the amount of time that it took Verizon to approve the update.

Technically this update is still not approved. It rolled out to a small test group that includes some XDA hackers and they, in turn, figured out Google’s URL for the update and made it available to everyone.The frustrating thing is that the GSM version did not have this problem and updates rolled out on those non-Verizon networks without these delays. It is unclear exactly why Verizon is so slow to offer updates like this. Some say that it’s because the radios in the Verizon version of the phone have proprietary closed code that Google cannot distribute without first getting Verizon’s permission.  Others say it is simply a control thing for Verizon who seem to maintain a death grip on updates.  The truth is no one really knows why Verizon is so SLOW with approving updates they are. In fact, this seems to be the case with every phone on Verizon’s network. It is enough of an issue that they seem to be losing customers over it. In fact, I’ve seen reports of people who have switched to a GSM carrier for this very reason.  Even Google has admitted that the update experience with Verizon and Sprint versions of the Galaxy Nexus have been sub par.  Verizon either needs to get off its duff and approve these updates or turn the control over to the phone manufacturer as they have done with the iPhone.  After all, if Verizon can allow Apple to control the update path for iPhones why can’t they do it for  Android devices?  And here’s the kicker- Google did not release a version of the Nexus 4 on Verizon and I have no doubt this was a huge factor. I hope that by the time I am up for a new phone Verizon has a new Nexus device but I’m not expecting it to be the case. That may actually get me to move from Verizon to a GSM carrier that does have a Nexus device since I believe the only TRUE Android phone is a Nexus device. (I hate Motoblur, TouchWiz and HTC Sense UI with a passion.)

Get with the program, Verizon, or I will be leaving for another carrier.