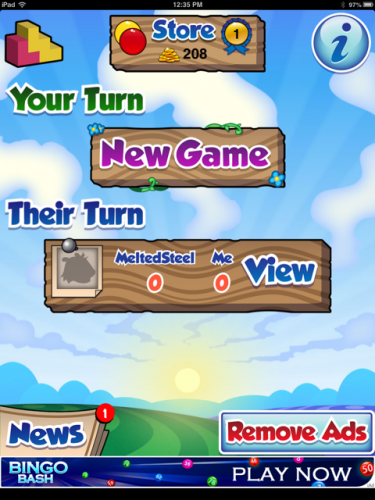 The conversion of a board game to a smartphone game can be tricky, due to getting controls and the feel of the game correct. For that reason I haven’t been a big fan of games like the Wii version of Monopoly. But a game like Connect 4 seems to be a natural – the controls are simple, and the flow and view of the game work perfectly on small screens as well as tablets. But to make it really stand out there needs to be a twist, so let’s see how they did in my Foursies for iOS Game Review!

Type of app: Multiplayer board game

Platform/where to buy: iPad/iPhone; available in the iTunes App Store 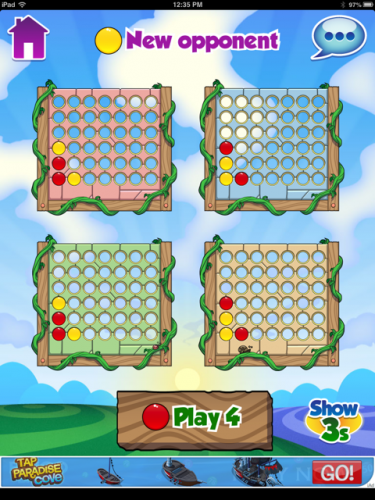 Description:
Here are some of the features of this four in a row game with a unique twist.

Play four boards at the same time against the same opponent
BUT
You have to play in a different column on each board
AND
The first player to get a line on two boards wins. 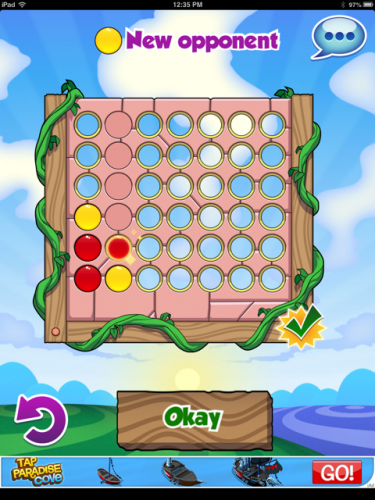 As the app description indicates, this is basically ‘multiplayer multidimensional Connect 4’. In Connect 4 the goal is to get four pieces in a row – vertical, horizontal or diagonal. Of course, your opponent is trying to do the same thing, so there is strategy in either setting up your own win or blocking your opponents moves to force a draw.

Foursies is a multiplayer-only game, so you need opponents just to get started. After the tutorial you can either explicitly invite opponents or simply take a random ‘next available’ match. You then position your pieces on the four boards, but as you position on one board that column is blocked on the others. This requires strategy as you might win one board but lose another due to positioning restrictions. 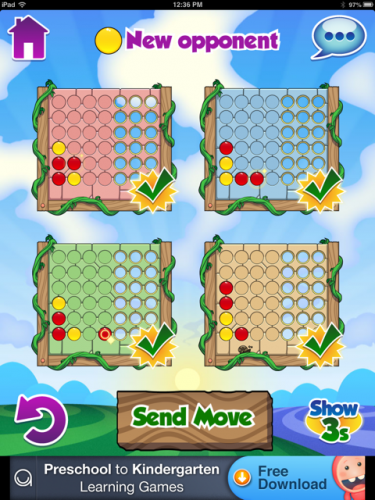 After your turn you choose to ‘send moves’ which then alerts your opponent that it is their turn. When their moves are complete you have the opportunity to move again. The last move from your opponent on each board is highlighted, showing if you are in trouble or not. You each continue to take moves until one of you gets two boards complete, and that person gets the win. You can then continue playing rounds against that opponent or move on to others.

There is a store that allows you to broadly customize the game by purchasing new colors and shapes for the pieces. You can also pay to remove advertisements – and given that you need to endure full-screen ads with each turn that might be a good choice. Either way, Foursies is fun that evokes a classic game while delivering it in a fresh new way.

Ease of use/Overall performance: If you have ever played Connect 4 you will jump right into this game without difficulty. And the game does a great job enforcing the rules and showing you a tutorial to help you along. 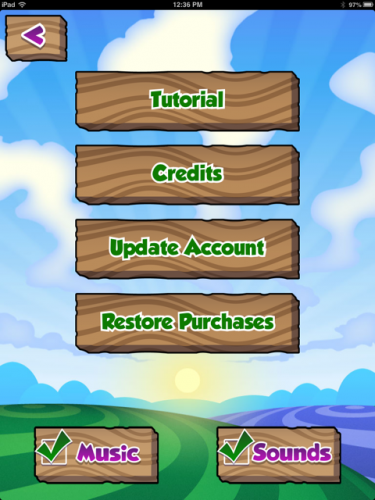 Would use again/recommend?: Definitely! I have always loved Connect 4, and the quick and easy way you can connect and play a round makes it a no-brainer. If you plan to play any significant amount you will want to pay to kill the ads, but the game is inexpensive enough to not be an issue.

Suggested changes/wish list for updates: The ads are fairly intrusive, particularly the full screen ones after each round – but since they are removed with purchase it isn’t a big deal.

Price: Free download with in-app purchase of full version for $1.99