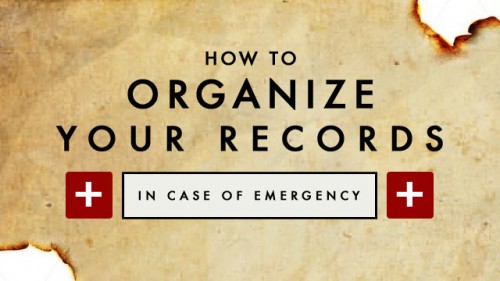 Who Has Your Digital Back in an Emergency

This past weekend my brother had a massive heart attack, and while he is now stable he has a long road ahead of him. Right after it happened he was treated – it was amazingly fortunate that it happened in a gym with a doctor next to him and a nurse on staff! It is a symptom of our far-flung society that aside from his ex-wife and high school daughter, I am the closest one in terms of distance – and I live nearly FOUR HOURS away! In situations like this it is worth asking who has your digital back in an emergency?

After I arrived that evening I met with the daughter and ex-wife, and later picked up his adult son from the train station, the focus was pretty clear – making sure his immediate survival needs were met, and communicating to everyone else in transit what was happening.

But we knew that the next morning we had some work to do – all of his belongings were left at the gym, and we had no idea exactly what was where. Then we needed to deal with notifying his work, getting his current insurance info, getting his doctor info to get all of his medical history (he’d had a small heart attack before), and so on.

But how do you even DO this stuff in the digital era?

When my father had a heart attack in the mid-80s it was very easy to consult our phone directory at home for numbers, pull out a physical folder with all of his doctor and medical info, and also consult our phone file for other friends and family who should be consulted.

Perhaps one GOOD thing is that in most households there are two obvious places people put this info: their smartphone and computer. He has two phones – a personal iPhone and a work Blackberry. We found the Blackberry at his apartment, which was GREAT! Oh wait, what is his passcode?! Fortunately his daughter knows the passwords to both phones. That allowed us to get into the phone, get the numbers of his boss and admin at work and call them – and since everyone has cell phones they were available to talk on the weekend and we got work resolved.

Next, since the divorce was fairly recent, his ex-wife had old records that were still stored at the house to grab the info from the earlier heart attack and also get messages to the offices of his doctors to send along the records. We found his current medical info in files at his apartment while looking for a spare car key, as the gym hadn’t immediately found everything.

We were also able to find his insurance card, which is something we could have done through his work but was out in the open as he had just gotten a new replacement card set. After heading back to the gym and getting his car, keys, wallet and iPhone we were all set – we had everything we needed.

And with his iPhone we also had his frequently texted contacts, email account, and even Facebook access – pretty much his entire digital identity. Sure we don’t have all of the passwords, but we had a starting point that allowed us to discuss a strategy if things had not gone well (fortunately they have!). This way, when he was waking up we had already contacted his closest friends so they could be ready to support him and visit as appropriate and allowed.

But all of this going well is a reminder of how easily it could have NOT gone well. If the relationship with his daughter was not good after the divorce then likely no one would have had his phone passwords. If the real estate market was such that they had already sold their house, who knows where his physical records would have been?

As an example, no one could remember his WiFi password at his apartment – we all had basic ideas and could probably have worked it out eventually, but imagine if that was one of his phones or something else critical?

Over at LifeHacker they have a great article about preparing your records for easy access in case something happens. It is really worth reading, and they even have a template. But here are the basics:
– Gather the absolutely essential hardcopy items such as Social Security Number, birth certificate, passport, etc. Scan those.
– Gather non-paper essentials such as account numbers, work and other critical contacts, passwords, and so on
– Export passwords – while many folks maintain a password file, LifeHacker recommens using an encrypted export from a password utility to keep it more secure.
– Share your file! You don’t want to broadcast it, but be sure that the few key people you need to trust in case something happens to you have access to this information. It would help if they were tech-savvy, but if not at least establish rules for keeping your information secure.
– Update regularly – put a reminder for every quarter in your calendar, and give your info a check.

By following these rules you can be assured that in case of an emergency, all of your information will be instantly accessible by those who you choose to handle your affairs in an emergency.

And as I was finishing this up Google announced that they were offering you the ability to ‘plan your digital afterlife’. What this entails is setting up a plan that will tell Google when to consider your account inactive and what to do with your information at that point. You can set a threshold of 3, 6, 9 or 12 months, and then have everything deleted. Or, you can designate a trusted person to get your information at that point, including: +1s; Blogger; Contacts and Circles; Drive; Gmail; Google+ Profiles, Pages and Streams; Picasa Web Albums; Google Voice and YouTube. Of course that is not something that would help you in an emergency, but helps your information get resolved when you are gone.

The bottom line is that as we move increasingly to non-physical methods of storing critical personal information we need to determine how to ensure that information is accessible to your loved ones in the case of an emergency. It seems that in 2013 I have already heard of people I know in terrible accidents at early ages, and the nurses were constantly noting how young my brother was for the floor … point being it is never too early to think about this stuff. Also, if you are an adult it is never too soon to create a Will.

How are YOU securing your information so that someone can ‘have your back’ in case of an emergency?