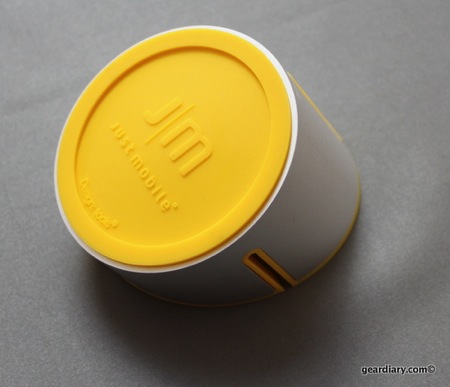 Just Mobile has made some of our favorite iPhone and Mac accessory. We met with the company at CES 2013, and they showed us a few of their upcoming products. One of them, the AluCup, struck me as one of their less compelling products. Still, there was something about it that intrigued me, and I looked forward to using and reviewing it. They sent one to us, so let’s take a look at this cup-shaped iPhone and iPad stand. 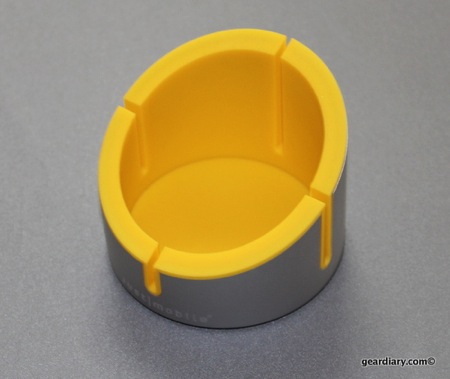 The Just Mobile AluCup is the result of a combination of an aluminium cup-shaped frame that provides rigidity and a rubber insert that adds color and device protection. The AluCup is noted as being compatible with the iPhone and iPad Mini. It also works with the iPod touch and other similarly sized devices. 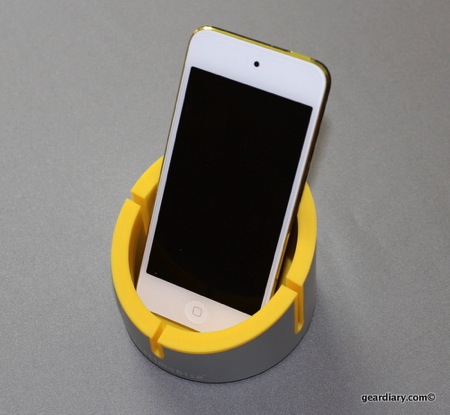 The AluCup can hold devices in one of three different positions — standing, reclining portrait, and reclining landscape. In addition to its three-position stand function the AluCup offers simple but effective cable organization system thanks to four strategic slits in the rubber and aluminum. They won’t lock a cable in place, but they will hold them fairly securely. 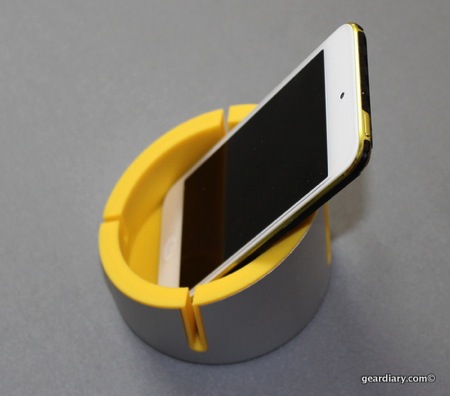 The AluCup, as you can see in this picture, cradles your iPhone or iPod touch inside the soft rubber lining. At no time does the device come into contact with the aluminum. I can see a stand like the AluCup working quite well on a bedside table or a desk at work — although the bright yellow would not be my first choice when using it in the latter location. This is one use-case for the AluCup.

There is a second use-case, and it has the potential to be even more beneficial. The design of the AluCup is rather similar to the Stump Stand I reviewed back in 2011 (read the review). Like the Stump, the angular top of the AluCup makes a perfect surface onto which the iPad can be placed. 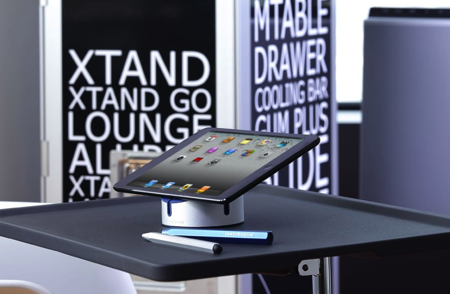 It is simple, stable and offers a good angle for both typing and viewing. Honestly this is the way in which I have found the AluCup most useful during my time with it. Here’s a look at the AluCup in action …

The AluCup far from a “must-have” accessory and you could easily live a long, happy, gadget-loving life without owning one. Still, if you want a brightly covered way to hold your iPhone, iPod touch or iPad mini, and you want something that people ask about, then it may be a good fit for you. It comes in four bright colors, is made with Just Mobile’s quality design and materials, and does what it promises with style and class.

What I Like: Excellent materials; Won’t scratch your device; Works with numerous devices; Offers simple but effective cable management

What Needs Improvement: Won’t hold larger phones or iPhones in bulky cases inside the cup