Posted By: Michael Anderson May 3, 2013
ShareTweet 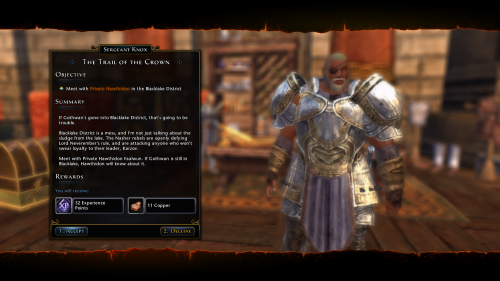 The realms of Neverwinter and the Sword Coast are beloved by all fantasy RPG gamers, and they have been featured since the very earliest days of Dungeons & Dragons. Some of the most famous games set in this universe are Baldur’s Gate 1 & 2, Icewind Dale 1 & 2, and Neverwinter Nights 1 & 2. Though its main campaign was criticized by some in 2002 as lacking depth and excitement compared to the Baldur’s Gates games, multiplayer and player-created content have kept Neverwinter Nights and its sequel popular for more than a decade. So when Cryptic Entertainment and Perfect Worlds announced a MMORPG called ‘Neverwinter’, it was met with a combination of excitement and trepidation. The game is now in ‘open beta’, so let me give some impressions after putting some hours into playing!

Background:
The story of the development of Neverwinter is so full of plot twists and intrigue to make it seem like a Lifetime movie! Announced by Atari in 2010, Neverwinter was in development at Cryptic Studios (which Atari bought in 2009); it was to be a co-operative multiplayer story-based fantasy RPG with seamless online and offline modes, and it was slated for a late 2011 release. In mid-2011 Atari sold Cryptic to Perfect World, and Neverwinter was delayed into 2012. Also in 2011 there was a load of drama around the Dungeons & Dragons licensing lawsuit between Atari and Wizards of the Coast, captured here. Perfect World secured publishing rights to the game license from Atari as well.

In early 2012, Perfect World announced (not surprisingly) that Neverwinter would transition to a full MMORPG … and that would delay the game until the end of 2012. They also announced that it would adopt the ‘free to play’ model rather than a full paid subscription. As the end of the year approached, Cryptic delayed Neverwinter into 2013 to polish the game. 2013 has seen a gradual increase in ‘private beta’ periods where more and more people help test the gameplay and the server load capabilities.

Neverwinter is based on the 4th edition Dungeon & Dragons rules … and I have already split the audience just by saying that. D&D 4E – as it is called – made some sweeping changes in order to help the rules make more sense to players, to adapt to more modern game types, and to make the early levels less like a ‘quest to stay alive’. For some those things were welcome, but for most veteran gamers they were an awful direction for the property. The reason I mention the rules, is that they have an impact on how the character creation system works. For more details, head here or here.

Dungeons & Dragons also features a variety of races such as Human, Elf, Dwarf, and so on. Each one has strengths and weaknesses, and therefore making the best overall character selection involves understanding the racial characteristics as well as the class characteristics.

For my character I chose to play a female human Control Wizard. As a human I am not the most powerful arcane master, but I gain health points compared to weaker Elves. The control wizard is a fairly typical arcane spellmaster, skilled at ranged attacks that can target multiple enemies at once. At higher levels this class becomes a walking missile platform. As for why I chose a female character? In many games it makes no difference, but I have always found that most developers write assuming that male players will choose male characters for most of their own testing playthroughs, so any problems are more likely to occur with a female character.

The creation process is very easy to walk through with or without specific knowledge, as everything is laid out logically and well explained. I liked how things such as appearance and characteristics gave you simple choices, but you could dive deeper if you wanted to customize things to a deeper level. My preference is simple appearance customization, but micromanaging the character build, and the creation process worked great for that.

I have been playing on the HP Elitebook 2570p, which features a Core i5 processor, 4GB of shared RAM and an integrated Intel HD 4000 graphics system. This would have been a ‘high end’ system in 2008 – well, except for the graphics, which are more 2005 vintage. In other words, this is a mid-range business system that focuses on portability (12″ screen) over power. But it was also the PC I used to run Bioshock Infinite, so it is fairly capable.

Overall controls are typical for a PC RPG, meaning that they would be totally foreign to a console gamer. You have the normal WASD keys for movement, jumping, primary and secondary attacks as well as a number of special attack keys. The number keys are allocated to a variety of feat-based actions as well as instant-use inventory items. Then you have all of the classic RPG keys such as M for map, J for journal, I for inventory, C for character, and so on. Having a PC-centric key-mapping makes for a much more enjoyable gaming experience.

The graphics are on par with most other recent MMORPGs, a bit better than Star Wars The Old Republic, but nothing on the scale of Bioshock. The music is classic high-fantasy orchestral stuff appropriate for the game, and the in-game voices are well done, though I found some lack of variety even early on in the game. The performance has been rock-solid, which is pretty amazing for a new online game – especially when you check out the crowding in hubs as I show around Seargent Knox here: 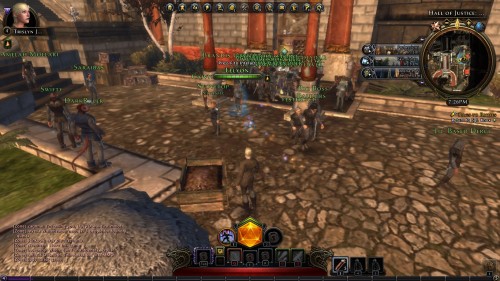 Once you get into the game, you start off more or less alone, and need to follow some simple instructions to get going. You learn to move, to look around, and to interact with objects and characters. Then you get a mission, and learn about the reward system. You then learn about combat, including targeting and casting spells (well, as a Wizard that is what I learned about … other classes learn their own attacks).

The entire introduction is centered around getting into Neverwinter, which makes it a perfectly compartmentalized area – you deal with quests and move from zone to zone until you encounter your first boss … and learn how to deal with someone who is much stronger and has many more hit points than you!

Quests once you get past the opening are a mix of story-based (required) and side-quests (optional). This keeps the story going all the time, but it gives you plenty to do in every zone. As you start to advance, you get more interesting quests and the ability to handle multiple quests at a time. Soon you are gaining character levels; after a few levels your advancements aren’t automatic, and you will start making choices. These choices define your character going forward.

I also enjoy the combat system, it is simple yet effective. Left click has one attack, right click has another, and you get to map your special, daily and other attacks to three different keys. The combat flows naturally as you approach enemies and can attack once within range, and watch their health decrease as you attack. Your attacks require stamina which will quickly refill but is not infinite. Health doesn’t regenerate in combat zones, so you need to keep health potions handy at all times. 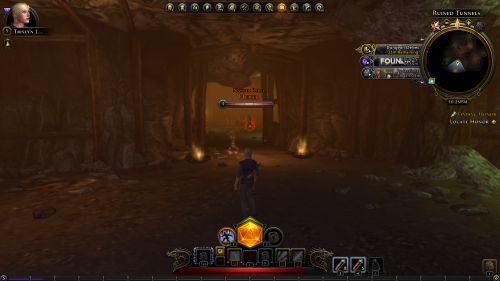 Rather than just continue to drone on, I wanted to touch on some highs and lows, to help give you a feel for what to expect:

As I noted when I looked at Star Wars TOR, I have never been a huge fan of MMORPG games … and yet here I am with the most gaming time over the last few weeks going to MMORPGs (SW TOR and now Neverwinter). These games offer a single player gamer enough of a story and RPG experience to get you fully engaged, but ultimately these are games focused on grouping and guilds and cooperation with others. So I know there will come a time when I will no longer be able to proceed in a single player mode … but for now I am enjoying the experience.

Neverwinter has exceeded my expectations so far – in fact, I would say I am already enjoying it more than Star Wars TOR. It has better combat, better character creation, and it is amazingly stable for a game that just entered beta.

Would I recommend it? DEFINITELY! If you are a PC gamer with any sort of PC capable of playing games, head to the official site and sign up for an account, grab the 4GB download and start playing!

Here is the intro video for the game:

Has anyone else been playing? What do you think?