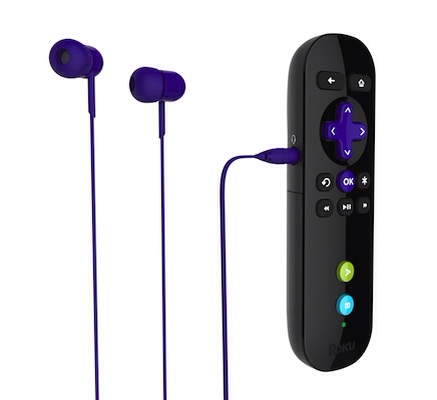 Gadgets have become packed with more and more features, many of which we end up forgetting about or just never use. When the Roku 3 was announced, we had an internal discussion at Gear Diary about how the headphone jack in the remote was a useless feature — who would hook up headphones to a remote to watch TV, when they could just plug headphones into a tablet and have the same private viewing experience? We use our Roku 3 all the time but never gave the headphone jack a thought, until today when I stumbled upon a situation where it worked perfectly!

In our house the living room is next to the stairs, and off the stairs is our bedroom. Sarah was taking a nap this afternoon, and I needed to get through our pile of to be shredded mail. Normally I’d watch TV while shredding with the volume turned up, but that would have been mean to Sarah. So I had resigned myself to watching on my iPad instead of the glorious 40″ TV right in front of me, until I remembered the Roku remote. Now I could drown out the shredder, watch TV as loud as I wanted on the nice big screen, without disturbing my sleeping wife!

It’s amazing how little features, even ones we dismiss as being silly, can end up being ridiculously useful! Ever stumble across a simple little utility or feature that you dismissed, only to later realize that it  was EXACTLY what you needed? Let us know your best tips in the comments!