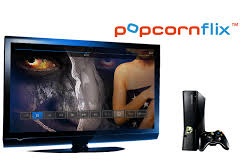 Unicorn Media enables Screen Media to ingest one video file, one time and deliver that content to the Xbox 360 via a single URL- with no SDK or plug-in required via its patented Unicorn Once™ technology. Unicorn Once™ optimizes a single mezzanine file, detects network conditions and re-packages the file on-the-fly to deliver the most efficient format for delivery to Xbox360.

Users can use the Popcornflix app to view and pick new arrivals, the most popular selection or browse all movies. Users can also use the app to search movies by genre, title, actor or director.

Xbox 360 users can navigate and interact in the Popcornflix app using their voice or a hand wave using the unique, hands-free Kinect controller.

Popcornflix offers several eclectic movies from a wide range of genres that include action/thriller, “Bollywood”, comedy, documentary/short, drama, family/kids, horror, romance and urban. All these genres include unique choices to discover plus web and film school originals. These original movies offer a unique perspective on the process of filmmaking for viewers to enjoy and even learn from before they become the future filmmakers of tomorrow. Users can enjoy big-time directors forging their way into an established career and Hollywood’s biggest stars performing in their earlier films. Movies in Spanish are also available.

When asked how he keeps up with how film distribution systems work, Gary credits his smart, aggressive staff. “We really focus on building the best apps we can with the easiest interfaces where it’s easy and fluid for viewers to watch a movie. Every app is two clicks away from watching a film.”

Future plans include a second digital movie streaming service (with Popcornflix as the “parent” service) relating to their horror label, Screen Media Darkside, tentatively called Frightpix. “Horror is always a universal,” says Gard. “We’re also working on building Popcornflix Español and, as always, expanding our services and their availability. There is pragmatically no way that one platform can have all choices, so we have to keep up and explore avenues to make the best deliver to our users.”