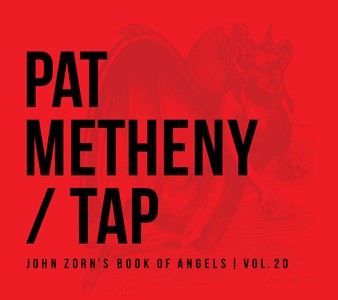 If I was to make a list of musical artists whose stuff I enjoy and who have influenced me through the decades, two names that would certainly be on the list are Pat Metheny and John Zorn. I have followed Metheny since the late 70s and have enjoyed most of his group and solo works; Zorn I discovered with ‘Naked City’, but since then have enjoyed sampling his voluminous output through the years. Yet in spite of each artist collaborating with tons of other musicians, they had never worked together – until now! Tap is from John Zorn’s Book of Angels series, and Metheny performs nearly all of the instruments on these interpretive songs. But does the collaboration actually work? Read on and find out!

Beginning in the 1990s, Zorn wrote 500 songs inspired by traditional Jewish music; they came to be known as two volumes of the Masada Book. He performed the first 200 songs of Book One with the rotating members of the Masada ensemble for a decade before writing Book Two s 300 tunes in just three months. Over the past eight years, the songs from Book Two have been recorded as volumes of The Book of Angels by a stellar group of musicians, including the Masada Quintet, Masada String Trio, Medeski Martin & Wood, and Marc Ribot.

Zorn says of Metheny s recording, “Pat is of course a living legend one of those rare lights in the universe. His incredible facility and dedication, indefatigable energy and focus, imagination, and never-ending curiosity have distinguished him as truly one of the greatest musicians on the planet. ” He continues, “Tap is a showcase for Pat s remarkable imagination, technique, passion, and love for the world. No matter how many times I listen to this recording I am hit with that same sense of exhilaration that hit me the very first time.”

Metheny, who won his 20th Grammy Award in 2013, adds, “I have admired John Zorn since the late 70s and have followed his amazing output every step of the way. A few years ago, after contacting me to write some notes for one of his Arcana publications, John and I began an inspired e-mail connection. (As hard as it is to believe, we had never met in person over the years.) I mentioned that I had followed his Book of Angels series from the start and felt like I might be able to contribute something unique to the collection. With his enthusiastic encouragement, he gave me some suggestions as to which tunes were still unrecorded, and I picked the ones that jumped out and spoke to me. Over the next year, in between breaks from the road, I recorded them one by one in my home studio whenever I got a chance. ”

On ‘Tap, we have a half-dozen John Zorn compositions done largely as frameworks, with Pat Metheny in charge of arranging and fleshing them out. The results are better than expected – you can hear Zorn, you can hear Metheny … and in the mixing of the two you can hear musical influences that seem to range all up and down jazz and progressive music of the last few decades. The songs are timeless and timely all at once; they are full of technology but sonically pure. They are dense yet silence and space are expertly utilized.

Pretty much everything you need to know is contained in the lead-off song “Mastema” – starting off with a layered guitar riff that ping-pongs from left to right channel, we then get a sitar-sounding guitar carrying the melody, which a backwards guitar effect provides tonal color.

That effect immediately brought to mind John Scofield’s unique sounds from Uberjam, whereas the rest of the song was very much Metheny interpreting Zorn. The ending is a tech-heavy dissonant electronic rave, which owes as much to electronic dance music (EDM) noise trends from folks like Skrillex as it does to the work of Metheny or Zorn.

From there you get varying amounts of the flavors of Zorn and Metheny, beauty and energy. But at some point in the middle of the Tharsis I was again reminded of how at times the result of collaboration can be greater than the sum of the individual elements.

‘Tap’ is an amazingly adventurous work. It reminds me of the stellar classic Ornette Coleman collaboration ‘Song X’, in that both artists are fully engaged, and the results show clear impact from both but also a transcendant quality that was only possible by having both acting together seeking something more from the music than either alone could create.

‘Quick Hit’ Song: “Tharsis” – starting off with a layered syncopated guitar riff that immediately drops into an amazingly complex rhythmic section that just keeps exanding and expanding. Then you get Metheny’s signature GR-300 sound on top – only when I listened I felt that I could have been hearing King Crimson with Adrian Belew on top. The rhythms were pounding in a dozen directions, and yet there was an inescapable groove. Truly one of those transcendant moments in music.

Would I recommend?: Absolutely! As a big fan of both artists I was concerned that this would be more of a missed opportunity or that the styles would clash rather than mesh, but fortunately the professionalism and artistry of these two masters combined to create a very special recording.

Suggested audience: While both Metheny and Zorn fans should find something to love, this definitely demands an adventurous ear – if you don’t like what you hear in the video below, don’t bother with the album.