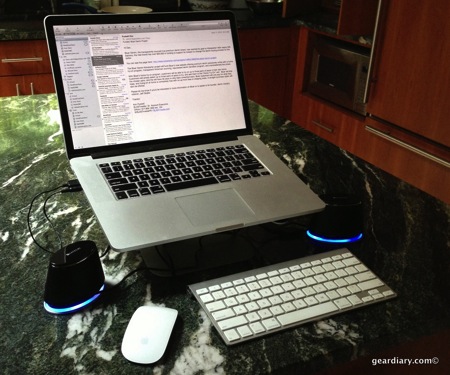 When Apple first announced the MacBook Pro with retina display a year ago, they made a big deal out of the fact that the 15″ laptop powerhouse would not only ship with the best screen ever, but that it also sported the best speakers they had ever put in a laptop. Having had my MBPr for almost a year, I can without hesitation, say that IF that is the case, then it simply means that all previous Apple laptops had particularly crappy speakers. 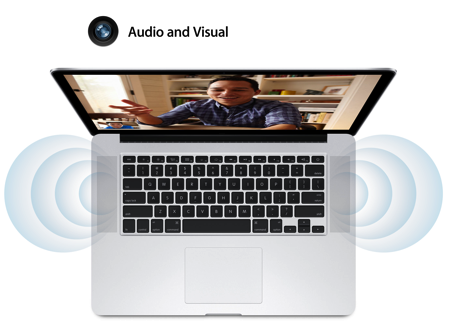 Yes, I’ve been using my 15″ MacBook Pro with retina display for a year, and I have been unimpressed with the speakers the entire time.

It’s not that the speakers are particularly bad – they aren’t, but they aren’t particularly good either. Moreover, they don’t get nearly loud enough. And while there is a software solution that can allow you to get more volume from your speakers, I am reticent to use it for fear of ultimately blowing them or at least shortening their lifespan. The speakers are good enough for watching a movie, but if you are looking to enjoy your music then you’ll need to look elsewhere. That is why I was interested in checking out to Satechi’s inexpensive Dual Sonic desktop speaker solution. The multiple cables make it a bit of a throwback to earlier times, but they work well enough and are an inexpensive way to actually get what Apple promised a year ago. 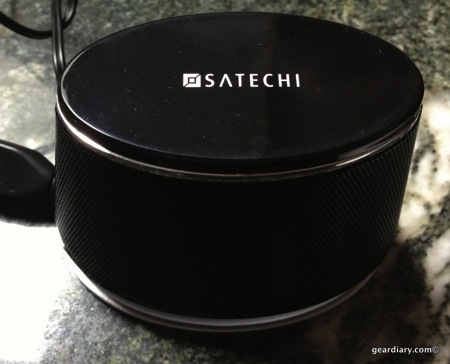 The packaging on the speakers is both simple and relatively ugly. These are a budget accessory, and the unboxing experience proves that to be the case. Inside the box you simply find the two speakers permanently connected by cables to one another with a second cable coming off one of the speakers, splitting into two parts: one having a USB Connector and the second having 3.5 mm connector. On one of the cables is a rudimentary volume control that is simply an old-fashioned spinning wheel. Honestly, if I had seen speakers like this a decade or a decade and a half ago, then I wouldn’t have been surprised. There’s nothing particularly retro about them, but they’re also isn’t anything particularly modern or fancy. They are simple, but they do the job. 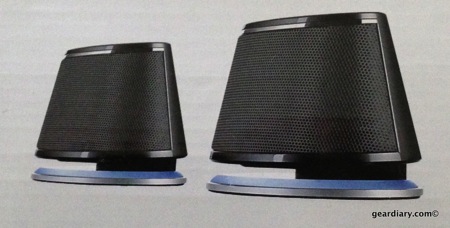 Each speaker sits on a permanent stand that has a cut out in front. This creates a channel into which you can pass the chords coming from the speaker so that they help unclutter your desk – to some degree at least since the abundance of cords is still there and needs to be dealt with. 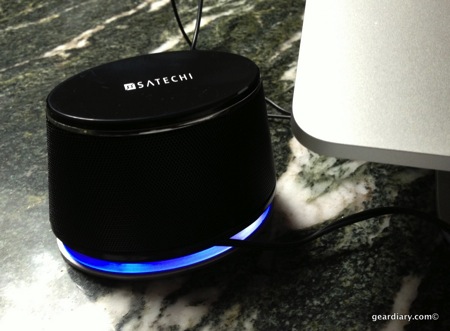 Note: if you are looking for the cleanest speaker solution possible, then you will probably want to opt for something that has Bluetooth and connects wirelessly. A good option is the Bluetooth speaker we reviewed last week. It sits onto of the laptop’s screen and has no cords to get in the way. 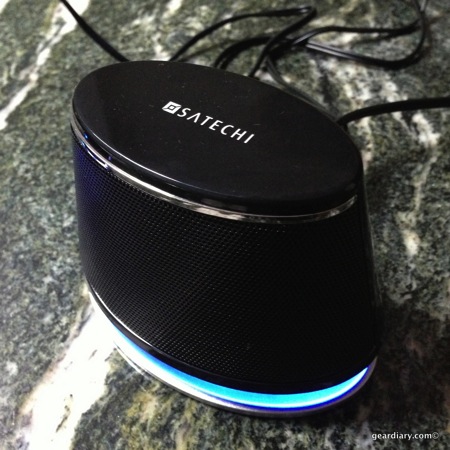 You won’t notice it initially, but once you plug in the speakers the base glows with a blue. There is no way to turn off the light or to adjust the brightness of it, and that’s something that may bother some. In fact, when I tested out the speakers with my MacBook Pro and closed the lid, the blue light still glowed brightly. If you are using these speakers with a computer that will sit in your bedroom, then you will only have the option of unplugging them if you don’t want the light. 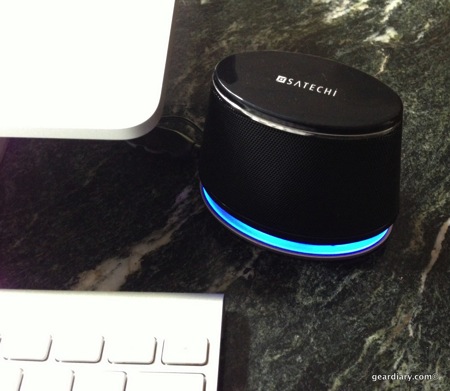 As noted, the cable splits into two parts, and one portion ends in a USB plug. This gets put into any powered USB port on your computer or, alternatively, if you have a USB AC adapter you can use that and plug it into the wall. Obviously the 3.5 mm connector plugs into the headphone jack on your laptop or desktop, and the audio is sent from the computer to the speakers over it. Why they didn’t find a way to use the USB plug for both the audio and the power is unclear to me except for the fact that having it split this way means you can plug the 35mm check into any audio source and, so long as the USB portion is getting power from the computer or the wall, enjoy your music that way.

The sound from the speakers is decent. I wouldn’t recommend these as you main way to enjoy music, but if you are looking for something that will be both better and louder than the speakers on your laptop, then they will certainly do the trick. The company notes that the speakers feature “Acoustic Air Spring Technology”. I’m not quite sure what that means, but I do know that, for speakers this small, the sound is actually quite good.

There is nothing particularly exciting about these speakers, but they are inexpensive, easy to use, and certainly is better audio and my laptop. If you are looking for a simple way to get better audio from your laptop or desktop and don’t want to spend a lot of money or deal with complicated set up, then this is a great option. The speakers are small, solid and don’t feel particularly cheap despite their inexpensive price. In other words, you can do much better than the speakers but, for the price, you could do a lot worse. You can learn more here.

What I Like: Decent sound for something this small; Inexpensive; Inline volume control; Glowing light some will love