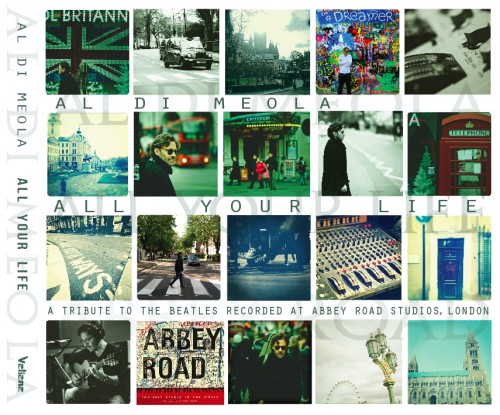 Al Di Meola All Your Life

It is hard to imagine it now, but for jazz musicians in the 1960s, wanting to play the music of The Beatles could result in being ostracized by your peers. So it was a bold move by folks like Wes Montgomery making a Beatles album, but his career was being pushed in a pop-jazz direction by his managers so his fans were more forgiving. But for those who grew up listening to the music there was a conflict as they were trying to become established as ‘serious’ musicians while being told that there was no place in serious music for The Beatles.

Fortunately that foolishness is long gone, and we have had great recordings including a couple of tracks by Pat Metheny and others. Now fusion legend Al Di Meola has released a very acoustic guitar-centric album entirely of Beatles songs. Let’s take a look!

Like millions of other American boys growing up during the 1960s, guitarist Al Di Meola was forever affected by seeing The Beatles on the Ed Sullivan Show back in the era of black & white TV. His early encounter with the Fab Four lit a passion in him and may be directly responsible for the New Jersey native first picking up the guitar. “There is no music in my lifetime that made as huge an impact on the world like that of the Beatles. What they did to modern pop music in the ‘60s changed everything.”

Nearly 50 years after the first wave of Beatlemania washed Stateside, the six-string superstar returns to his early roots in paying a personal tribute to that seminal influence with All Your Life. A virtual one-man show of virtuosity, All Your Life features the guitar great interpreting 14 familiar Beatles tunes in the stripped-down setting of strictly acoustic guitar. On some tracks, like “In My Life” and “Because,” he overdubs three guitars to get the rich, shimmering textures and intricate patterns created on his signature Al Di Meola Conde Hermanos nylon string guitar, his Gibson steel string guitar and a 1948 Martin acoustic. Others like “Penny Lane,” “I Am The Walrus” and “I Will” utilize two guitars while “And I Love Her,” “Blackbird” and “If I Fell” utilized a single guitar track. All the percussion heard throughout the recording is Di Meola himself slapping the wood body of his instrument or strumming muted strings for percussive effect.

All the tracks are imbued with the guitarist’s signature flamenco flourishes, intricate arpeggiating and dazzling cross-picking. Only one track does he employ other musicians (a dramatic reading of “Eleanor Rigby” that features a string quartet). Recorded in analogue at Abbey Road Studios in London, where the Beatles created most of their records during their heyday, All Your Life stands as a triumph in the long and illustrious career of a bona fide guitar hero.

I have always been what my wife calls ‘fiercely loyal’ – but when that comes to music it means I am willing to give artists I love multiple chances before I stop buying their stuff, not that I will blindly defend stuff that is awful. Al Di Meola rose to fame as part of the mid-70s fusion powerhouse Return to Forever with Chick Corea, Stanley Clarke and Lenny White, and ‘Romantic Warrior’ remains one of my top fusion albums of all time.

From the late 70s through the mid-80s Di Meola produced a string of excellent albums that incorporate technology as well as his flamenco and Latin touches over fusion compositions. But after that he seemed lost in the post-fusion era; like many of his contemporaries he tried releasing ‘mainstream’ jazz albums such as 1994’s ‘Orange and Blue’, but also like many others the efforts were sub-par. Then he returned to his world music origins with his World Sinfonia, and has had much more success. I have bought a few albums here and there … and been alternately happy and disappointed, but have yet to again feel the thrill of 1985’s “Cielo e Terra”.

But with ‘All Your Life’ he has again found that magical confluence of his massive technique, subtle stylings, and a compositional and interpretive setting that allows him to shine while also featuring the compositions.

The majority of the albums is played on one or two acoustic guitars (one nylon string, the other steel string), tracked left and right. ‘In My Life’ sets the tone, with the immediately recognizable lead-in altered rhythmically to match a more flamenco style, and as the song proper begins you get hand claps to further augment the tone. The song is original and inventive while remaining faithful and respectful of the original material. ‘And I Love Her’ takes a similar approach, altering the beginning phrase ever so slightly to impart a new rhythmic invention that provides Di Meola his platform to continue.

And if there is a theme throughout I would say it was “these are Beatles songs, don’t worry about dropping them – they are tough and can handle it!”

Across these tracks what you get is generally two tracks of Di Meola playing, occasionally multi-tracked to add some depth, with added claps and taps on the guitar for percussive effect. The melody is played and then twisted and improvised and represented in a way that is exciting and fresh, but never too far away from the original. All of the songs are easily recognized, yet you never feel like the guitarist is coasting or taking it easy.

One note: I had pre-ordered this a while ago and gotten it when it was released. But now it isn’t showing up on Amazon and is listed as ‘not currently available in the US’ on iTunes. When it is available again I will update the post! Until then, keep your eyes open … this is worth buying!

‘Quick Hit’ Song: “Eleanor Rigby” – here they made the decision to add strings to the mix, and it was the right choice. The guitar work is amazing, but having the strings really allows Di Meola to stretch out from the very beginning. The result is an incredibly exciting and powerful rendition, of which my older son said ‘this is definitely my jam’.

Would I recommend?: Absolutely! As a fan of the Beatles, Di Meola, and guitar improvisations in general, I was very hopeful for this. I didn’t expect it to exceed my expectations to this extent, so I am thrilled! Each time I listen I get more and more from the recording.

Suggested audience: Fans of amazing guitarists will love this, as will Beatle’s fans. This is a ‘must buy’ for anyone who loves Al Di Meola.

Here is the press kit video: