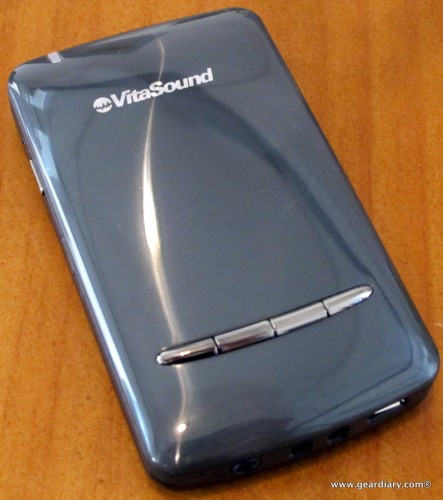 There are several people in my family who have hearing troubles, some more severe than others. For instance, my mom started having degenerative hearing loss when she was in her early 20s, and for as long as I can remember she has worn hearing aids. My daughter, Sarah, has always had problems with certain tones; she has trouble discerning what people are saying if they don’t speak clearly or if they mumble, and she has used the closed caption setting on her TV to watch movies since she was 15 or so. I’ve had Sarah’s hearing tested, and although it’s obvious that there is a problem, her hearing issues have never been bad enough for hearing aids to be recommended.

So when I was first approached about reviewing the VitaSound Personal Audio Enhancer, I knew that if the product worked there would definitely be someone in my family who would benefit from it, but I wasn’t yet sure about who should become my guinea pig.

According to the VitaSound site, the PAE-300

Because my mother already wears hearing aids, and she has a team of people at West Texas Rehab to keep her abreast of whatever her latest hearing loss solutions might include, I figured my daughter would be the one best suited to tell me whether the Personal Audio Enhancer was helpful enough to use regularly, or if it was a waste of money. I’ve been staying with Sarah and her husband for the last couple of weeks helping them to prepare for a new baby; this was a great time to put the PAE-300 to the test.

Included in the package are the Personal Audio Enhancer handset, the base unit & wireless transmitter, a set of earphones with microphone, a bag case, an AC adaptor, four different types of cables (Stereo, RCA, Optical, and Coaxial), along with a user manual.

There are four basic ways to use the Personal Audio Enhancer (or PAE):

1. In Watch mode, the PAE can wirelessly transmit audio from the television directly to the headset, so that the wearer can watch television without having to turn the sound up to disturbing levels (or turn on the closed captioning).

2. In Talk mode, the PAE uses “advanced noise-reduction and feedback suppression technology”, so that the wearer can understand and hear the person sitting next to them or across the table from them as it cuts down the background noise.

4. The PAE comes preloaded with a mix of nature sounds, including a babbling brook, forest birds, windy meadows and waterfalls; In Relax mode, the PAE-300 “provides soothing sounds for relaxation or potential relief from tinnitus.”

The Personal Audio Enhancer (or PAE) is a black plastic box that measures approximately 4.3″ tall x 2.4″ wide x 0.75″ thick. It’s a little bit bigger than a deck of cards, and it only weighs a little over 3 ounces. 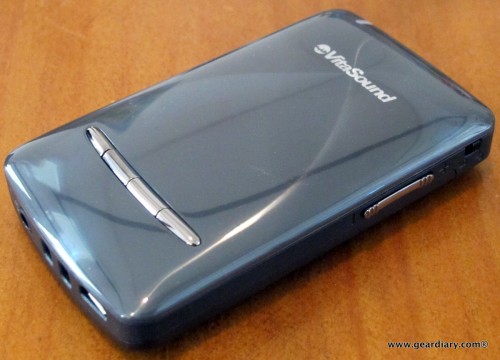 There are quite a few ports, LEDs, and switches around PAE’s body, and they are explained by this chart. 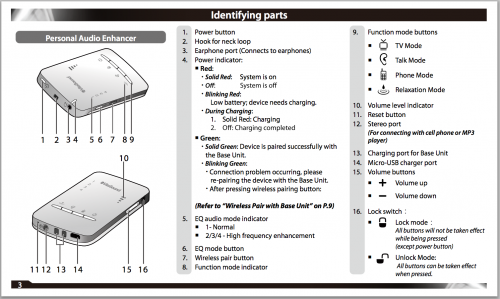 Setup is relatively simple; I put the base unit on the table under Sarah’s television, and I plugged the AC adaptor into a nearby wall socket. I first tried plugging the RCA cables into the color-corresponding ports on the back of the TV and into the base unit, but that didn’t work properly (and I’m not exactly sure why). I asked Jordan, Sarah’s husband to take a look at it, and see if there was a better place for me to try to link the TV to the base station; I figured that since they had a cable box, a DVD player, and some other things hooked up to the television, that I might be missing some otherwise simple link. Jordan plugged the coaxial cable into the base unit and the back of the television, and that was the magic combination to make things work with her TV. 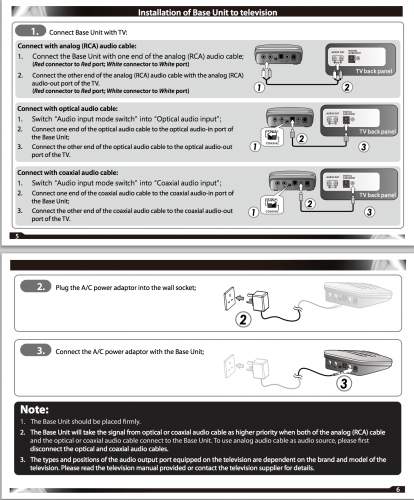 With everything hooked up, all that was left to do was charge the PAE; a full charge takes about five hours. 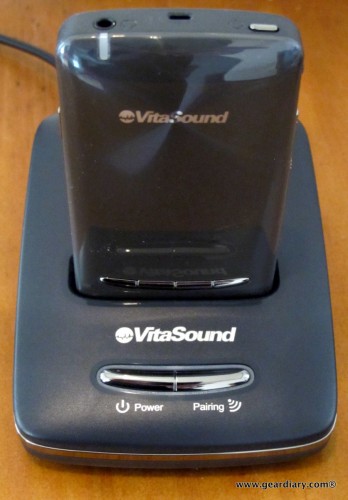 To jump right in and start using the PAE, you’ll want to attach the neck lanyard into the loop at the top of the device … 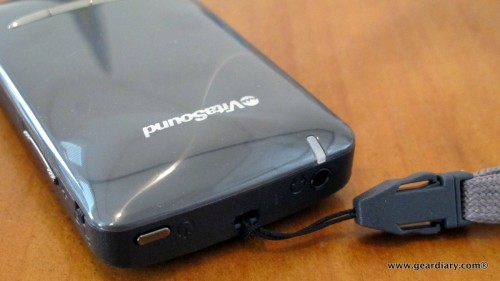 … and then plug in the headset.  There are four differently sized sets of tips included with the headset, so there shouldn’t be a problem getting a good fit. These tips help create a tight seal, which in itself helps a bit with filtering out background noise. 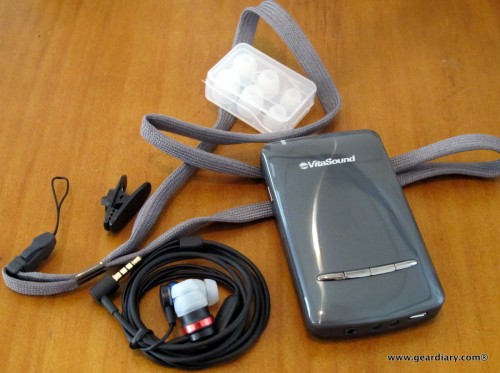 The headset that comes with the PAE appears to be of decent quality, but if you already own a favorite set of earphones, over the ear headphones, or earbuds, you can use them with the PAE, because it has a standard 3.5mm jack.

When my daughter first tried the headset, the television was turned on, but the PAE was in Talk mode. So as long as the TV was the only noise in the room, she could hear it fine. But when I said something to her, she was shocked by how clearly she could hear me and how the television noise was suddenly suppressed.

Of course, the main reason she wanted to use the PAE was in order to hear the television without having to turn the volume up ridiculously high or use the closed captioning, so TV mode was what she wanted to try next. 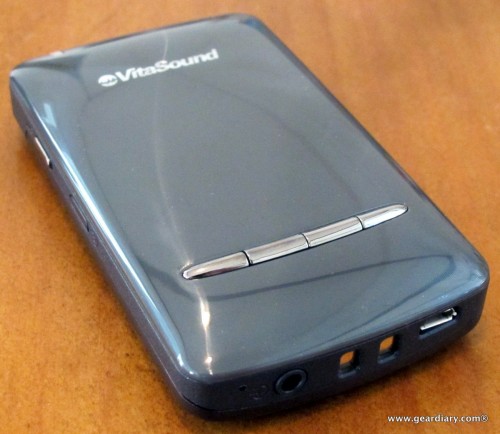 The four buttons on the front of the PAW-300 are to activate the different modes: (from left to right) Relax, Talk, Phone, and TV

Once she had switched to TV mode, Sarah couldn’t have been happier. One of the first things she did was say that we could turn off the closed captioning, and then she said, “put the volume on whatever you all need it to be; I’m good!”

The PAE and base unit need to be within 33 feet of each other to work, but there are no wires to trip over and 33 feet should work in even the largest television rooms.

Sarah doesn’t use the PAE for listening to music or talking on her mobile phone, because that is not where her hearing difficulty lies. But she absolutely loves the way that she can now put on her headset and listen to the television and understand what is going on — even when characters are speaking quickly or when they are mumbling.

I asked her to give me a few impression about using the PAE, and this is what she wanted to make sure that I shared:

I feel like I am in a movie theater when I am using the PAE to watch TV, because it is like the best surround sound.

The included earphones aren’t super comfortable, but I have always had a problem with in-ear headphones. I like that I can use my own headphones with the PAE.

I had asked Sarah if it bothered her to wear a headset when there were other people in the room while she was watching television, and although it took her a minute to realize I was speaking to her (and then it took another moment for her to remove one side of the stereo headset), she said no.

I have to admit that I was surprised that Sarah took to using the PAE as quickly and as happily as she did. My daughter can be slow to try new technology, and I got her to try the PAE by basically asking her to humor me. But since the first time she used it, Sarah has been putting the headset on every time she wants to watch television, and when she isn’t using it, the PAE  is back in the base unit so that it would be charged and ready for the next time. The PAE’s specifications say that it has an operating time of 12-14 hours or 6-8 hours in TV mode (likely because of the wireless draining the battery more quickly), but she hasn’t used it long enough to kill the battery yet.

I asked sarah if she wanted me to bring the PAE back home with me yesterday when I left El Paso; the fact that she looked at me like I was crazy as she told me “no” was all the answer I needed.

The VitaSound Personal Audio Assistant is a winner.

The VitaSound Personal Audio Enhancer (PAE-300) is available from Amazon,

SkyMall, and Herrington. It is also available through professional health and well-care distributors, such as; Westone, Teltex, Oaktree Products Inc., Hal-Hen, Harris Communications and Warner Tech Care Products. You can follow VitaSound Audio Inc. on Facebook.

What I Like: Fantastic sound enhancement for anyone who has difficulty listening to the television without the help of closed captioning or loud volumes; Battery can last up to 14 hours before recharging (up to 8 in TV mode); allows the wearer to hear conversations better in noisy environments; PAE is not too large or heavy, which is good since it will usually be worn around the neck or in a shirt pocket; comes with a nice set of in-ear headphones, but you can use your own

What Needs Improvement: Expensive, but you can find some online deals