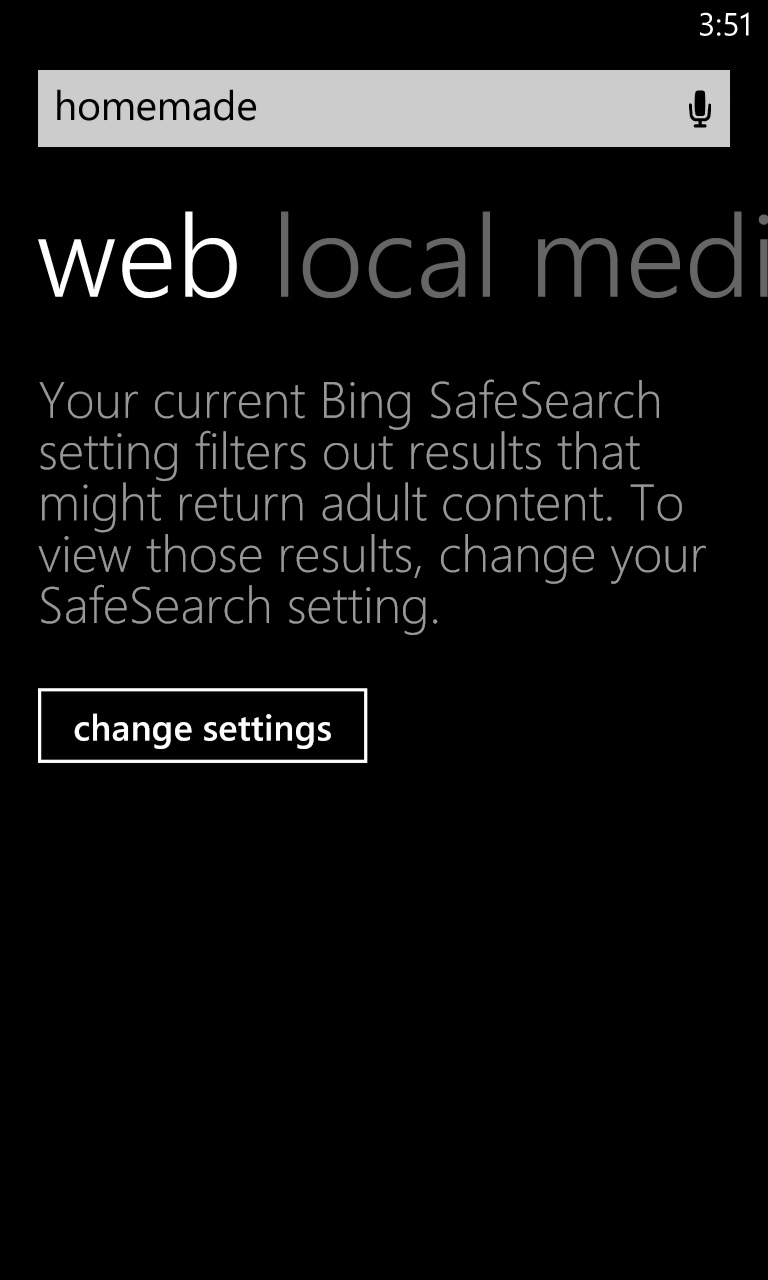 A few days ago I pointed out some very odd behavior in the Bing SafeSearch filter. Certain words, like “Lesbian”, were being summarily blocked while insulting or hateful words came through just fine. I had the chance to chat with someone from the Bing SafeSearch team today, and I learned a few important things: One, the SafeSearch filter isn’t as simplistic as it first appears, and there’s some nuance to how it blocks content. And two, Microsoft is an incredibly responsive and community-oriented company!

I learned that SafeSearch is designed to filter out “adult” content from web results. If a web result returns too many pornographic or adult links, the filter assumes the other links are suspect and blocks the whole search. Apparently, even innocuous terms get caught up in this, as the term “homemade” gets flagged and blocked on SafeSearch (and after I searched “homemade” with SafeSearch off, I understand why!)

Words like “faggot” may be offensive, but they don’t bring up adult content as the top links, mostly slang definition sites, and Wikipedia. The algorithm is entirely automatic, and it depends on what links are highly ranked; in other words, what’s verboten today may not be tomorrow if the top links change, and vice versa if some particularly everyday keyword in pornography descriptions were to pop up.

As part of the development of SafeSearch, the team hopes to find a way to add safe alternative terms. This way, if a search for “homemade” was blocked, it might come back and say “have you tried ‘homemade cupcakes’ instead?” SafeSearch also relies on context and natural language, which is why results like “Gay, Lesbian, Straight Education Network” sails through easily; it’s a specific term, and there’s no adult content attached to it (yet, anyway– apparently the Internet really is just a race between actual content and pornography). And because Bing’s algorithm is dynamic, as real content pushes down porn sites, the items caught by the filter will change and adjust. There is no blacklist of terms or anything similar, so context is really key in what gets flagged and what does not.

All of this was actually pretty fascinating, and it gave me a great deal of insight into how much work Microsoft has put into — and is continuing to put into — Bing.

But what struck me was how genuinely concerned my contact at Bing was that I knew that Microsoft was a very gay and lesbian friendly company, that they were very concerned about me being distressed or offended, and that they made sure I not only hung up with a better understanding of how SafeSearch works but also that I really knew that Microsoft hadn’t set out to offend anyone.

What really impresses me is that someone at Microsoft cared enough about my experience to reach out and have a discussion. It gave me a whole new insight into the ways Bing is dynamic and still growing, and it gave me a whole new respect for Microsoft and their corporate culture. Hopefully, SafeSearch will be able to implement safer suggested terms to help alleviate SafeSearch issues; in the meantime, if you hit the SafeSearch filter as a result of a search, try reworking your query. My original query “lesbian mom blogs” works just as well as “gay mom blogs” or “LGBT mom blogs”, for example, and now that I know the context of why that is the case,  it makes more sense.

And remember, don’t search Bing for “homemade” with SafeSearch on … it’s not just for cupcakes!