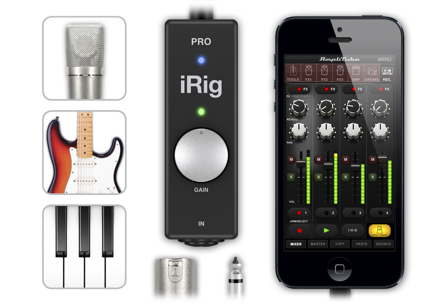 Covering technology means never being surprised, except when you are. Today we get the surprising announcement of iRig Pro, an all-in-one interface that my son described as ‘every iRig interface you’re reviewed stuffed into one small box’. That is about right, and at $149.99 I think they have a real winner with iRig Pro shipping later this month!

Overall this is an impressive array of capabilities stuffed into a small and portable package. Suddenly you don’t need to worry so much about what you are carrying with you – so long as you have your iPhone or iPad and iRig Pro you can interface with a guitar, microphone or any MIDI gear and jump right into making music!

Check out the introductory and hands-on video for iRig Pro:

You can get more info and pre-order iRig Pro from the IK Multimedia store!

And look forward to a review coming soon after the release of iRig Pro!