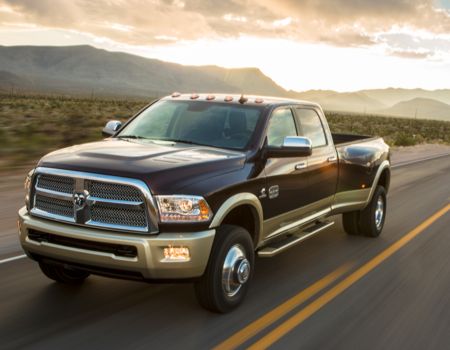 Competition in the pickup world does not end at the light duty segment, far from it. Truck makers constantly work to improve their heavy-duty consumer models as well and for 2013 the Chrysler Group has made significant improvements in the HD lineup of Ram trucks in the areas of powertrains, suspensions, technology and content.

Ram, the truck division over at the Chrysler Group (formerly known as Dodge Ram), has been busy making improvements to its consumer pickup models for 2013. Highlighting the upgrades in the Heavy Duty lineup is the power bump in the Cummins turbodiesel engines that now has Ram leading the power output war that has been waged in the truck segment for years. For 2013, the top Ram HD engine produces 385hp and 850 lb. ft. of torque. 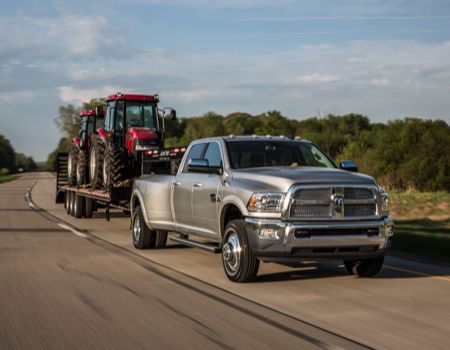 At a debut event at the State Fair of Texas last fall, then Ram top man Fred Diaz (now at Nissan) also announced a HEMI gas engine available in the 3500 Heavy Duty lineup for the first time. And for 2014 they are announcing the larger 6.4-liter V-8 HEMI making its way into 2500 and 3500 pickups.
Other significant enhancements to Ram Heavy Duty for the 2013 model year included a new chassis featuring an all-new frame and front and rear suspension technology along with styling and comfort and convenience upgrades carried over from the 1500 lineup.

Ram is still offering a six-speed manual gearbox in its trucks, the only in the segment to still offer the slushbox, and three six-speed automatic transmissions back the different versions of HEMI and Cummins engines offered in the next 2500 and 3500 trucks. 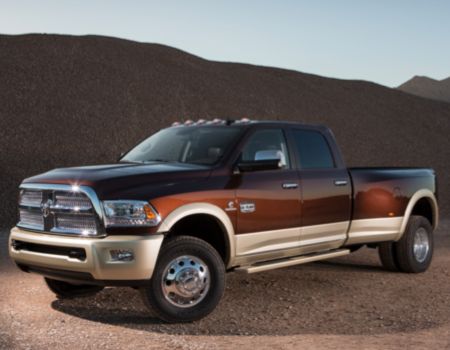 Recently we took delivery of the prettiest truck in the Ram HD lineup, the 3500 Laramie Longhorn dual-rear wheel Crew Cab 4×4. The truck is a bit of a dilemma as the outside hollers “let’s work” while the interior is screaming “let’s party.” Whichever voice Ram owners listen to, this is the truck that will “git ‘er done” – and then some. While a bit big to be running everyday errands in tight parking lots, the big Ram is perfect for short or long hauls especially when there is some payload or towing involved. While a bit rough when riding empty, this truck settles perfectly into its role by carrying several hundred pounds of stone or wood around with you.

To remain competitive in power, fuel economy and emissions categories, Ram has finally added diesel exhaust fluid injection to the mix while boasting a 15,000-mile range in between oil changes for the Cummins engines, twice that of the competition according to Diaz. All diesel engine trucks also benefit from a new cooling system and Ram Active Air intake system. And a new front-axle disconnect works with new transfer cases to boost fuel economy by up to 1 mpg in 4×4 model Ram HDs. 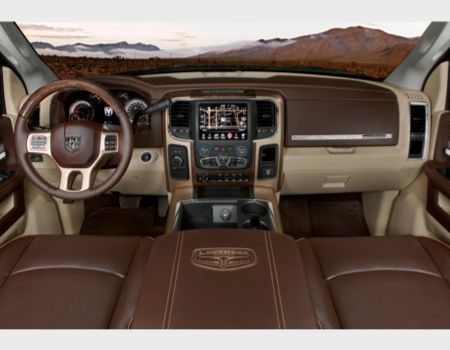 Material upgrades and a larger information display screen highlight interior improvements while some will appreciate a new central locking function where one press of the keyfob will lock all doors, Rambox compartments, and tailgate. This is a great feature as tailgate thefts are on a rise and replacing those puppies ain’t cheap. Drivers will notice the new information display screen added to the center dash for further convenience while occupants appreciate the wide open spaces inside to really relax and stretch out in an interior that makes one think of Lyle Lovett at the Grand Ole Opry.

Pricing for the big rig begins at $52,990 with our 2013 Laramie Longhorn arriving with a final sticker of $69,485. The truck is a beast but is surprisingly easy to drive – once you learn to mind the wide fenders in the rear. No ATM runs in this thing, but it will tackle the drive-thru with little trouble. 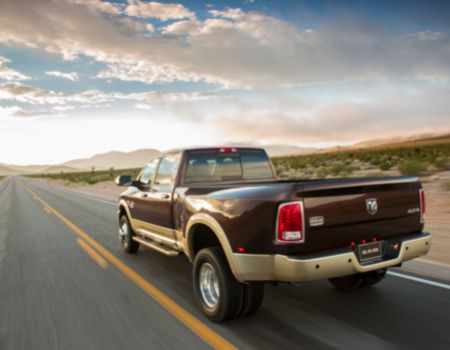