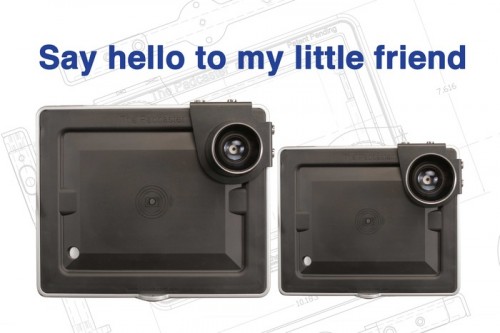 The original Padcaster demonstrated once again that dismissing the iPad as a media creation device is wrong-headed – it allowed iPad owners to attach their tablet to a tripod and then use lights, lenses, external microphones and more. Now they have launched a new Kickstarter to help fund the creation of an iPad Mini version!

Why are they seeking funding now? Well, they only introduced the Padcaster in April and started selling it in June so it is just starting to get rolling through production. As they note:

“The Original Padcaster is already in production, having been funded almost entirely out of pocket by the Padcaster team, but interest has increased in the past few months and we need help in order to meet the demands of our audience. During the last year, the number one question we’ve been asked is when we will have a Padcaster for the iPad mini. “

The Kickstarter lasts through October 11th and is seeking $30,000.

Head to Kickstarter to check it out!

Padcaster has also introduced version 2.0 of their initial product, including many changes included in the Padcaster Mini. Here are some of the details:

• The headphone pass-through hole is now .39 inches, making it possible to thread heavier duty headsets through to connect to the iPad

• Material was removed from the urethane insert to allow for easier access to the charging port, power button and volume buttons; this new modification also makes it much easier to insert and remove the iPad from The Padcaster’s urethane insert

• Two additional rubber pads have been built into the bottom of The Padcaster’s metal frame, providing a safe, secure and steady hold when mounting a DSLR or other camera