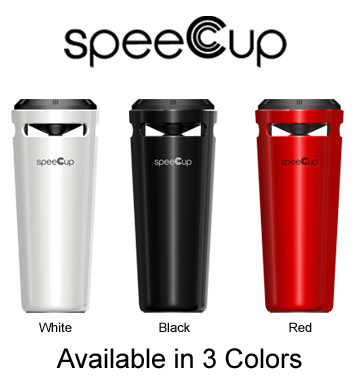 Have you ever said to yourself, “You know what I need?  A portable Bluetooth speaker in the shape of a travel mug that fits right in my cup holder in my car.”?  If so, you’re in luck!  iCreation’s speeCup is a very convenient, nicely powered speaker that fits your criteria.  The speeCup retails for $129.95. 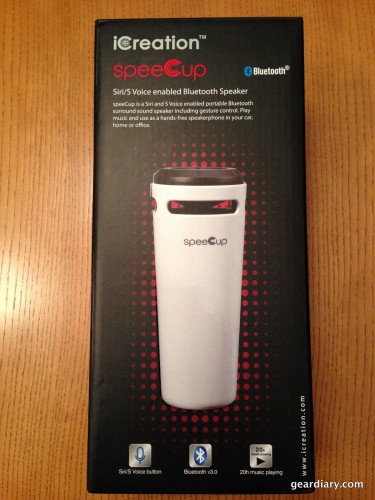 Not only does the speeCup play your tunes, but it also doubles as a Bluetooth speakerphone so that you can talk to your friends while staying safe on the road.  The built-in microphone is also noise cancelling so less road noise makes it through to your friends on the phone.  speeCup is also able to connect to your iPhone’s Siri or Samsung Galaxy’s S Voice in order to use voice commands to control your phone.  Don’t want to use your voice?  You’re also able to control the speeCup using hand gestures, which is a very nice feature to use while you’re driving. 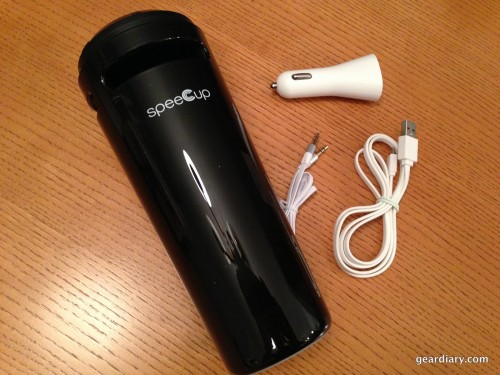 Everything that comes in the box.

speeCup is equipped with only one speaker, but the sound coming from within does not belie that fact.  The design of the speeCup radiates the sound out from this powerful speaker in all 360 degrees.  The speeCup is powered by a microUSB port and comes with a microUSB to USB cable for charging.  The Lithium Ion battery inside the speeCup will last for 20 hours, perfect for travel.  There is also an audio-out port on the speeCup so that you can listen to your music over your car stereo while connected via Bluetooth.  The power switch is on the bottom of the speaker, which makes it a little difficult to use while driving.  The speeCup also comes with a 12 volt dual-USB charger with which you can charge your speeCup as well as a phone at the same time. 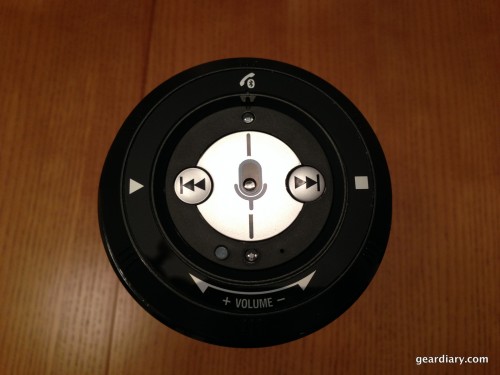 The control knob atop the speeCup.

On top of the 8” tall speaker are the physical controls for the speeCup, including a twisting volume control knob.  The knob encompasses the entire top of the speaker and all of the physical buttons are on this knob.  There are backward and forward track skip buttons as well as a large voice command access button in the middle of the knob.  The knob also houses the gesture control receptors and an LED status indicator.  The speaker is tall enough to mimic a travel coffee mug, however it is also tall enough to be a little unwieldy while standing on a table.  It also might get in the way of your car’s shifter, depending on the make and model of your car. 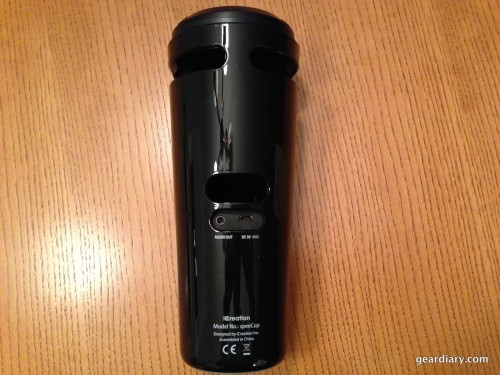 The back of the speeCup showing the microUSB jack and audio-out port.

I took the speeCup on the road with me in order to get a sense of how it performs in the real world.  The first thing I have to say is that the speaker really surprised me.  The sound quality was terrific, even while driving on the highway.  The volume goes high enough to be clearly heard at high speeds and low enough to enjoy in your home.  The bass came through clearly and the high notes were hit well.  Since the speeCup has a single speaker, it won’t broadcast in stereo. 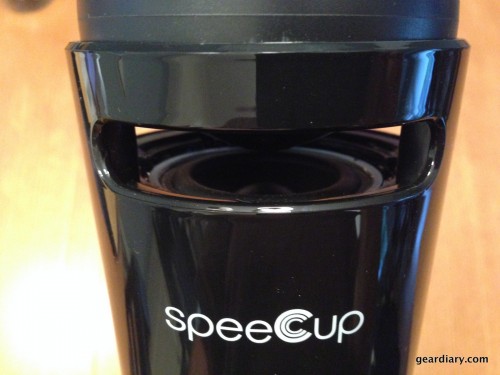 The speaker inside the speeCup.

The low point of the speeCup for me was the clarity of my voice on the other end of a phone call using the speeCup.  It worked well enough at low speeds, however I was told that I sounded far away from the microphone, which is the case as compared to a Bluetooth headset.  When I hit the highway, I was told that along with my voice sounding far away, there was added road noise that was not cancelled out by the microphone. 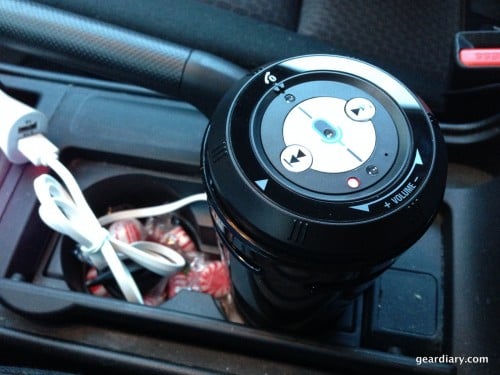 The speeCup sitting in my cup holder.

Overall, I would definitely recommend the speeCup as a portable Bluetooth speaker, especially if you find that you want to wirelessly play music in your car but you’re lacking a built-in Bluetooth music player.  But don’t get your hopes up that the speeCup will replace your trusty Bluetooth headset, as it just does not compare in voice clarity.  The fact that the speeCup integrates with Siri and S Voice is a great feature and it adds a lot to the experience.  The gesture control adds another layer of functionality that a lot of portable speakers do not have.

iCreation’s speeCup can be ordered directly from the manufacturer, here.

What can be improved: Speakerphone functionality is disappointing; Slightly unweildy shape; Slightly overpriced.