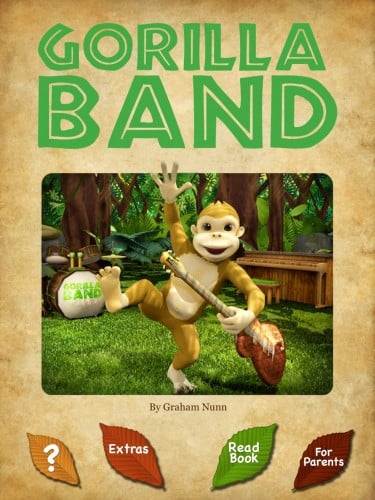 Gorilla Band is for kids. Completely, unapologetically for kids. Like my 5-year old. Who adores this app.

Gorilla Band, by the folks at Wasabi (who provided us with a copy to review), is an interactive children’s book for iOS and Android devices. The main storyline, aimed at children between the ages of 2 and 7, is about gorillas who play instruments and form a band. The gorillas don’t like the classical music they’re being taught – they want to play rock ‘n’ roll, of course. Fortunately, their music teacher welcomes their interests. 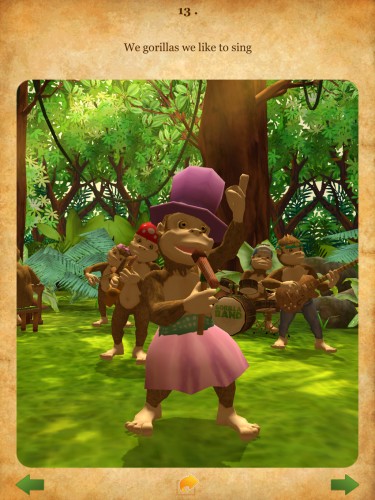 The story begins with two gorillas who don’t like their music teacher’s curriculum. One-by-one, the user gets to help the first two gorillas add additional members by tapping on other gorillas and getting them to drop into the band. Once all of the gorillas have joined the band, they play an original song. An additional song is included as a bonus.

The story text appears across the top of the screen. It’s a cute, rhyming story, although it seems a bit brief. Depending on your child’s age and abilities, you can read the story to your child, he or she can either read it themselves, or they can allow the book to be read aloud for them automatically.

The remainder of the screen is dominated by large, interactive, highly detailed graphics, which is where the app really shines. The graphics have a 3D perspective that really looks nice on an iPad retina display. The scenes are set in the jungle. There’s a continuous flow of falling leaves that helps keep the scenes from being too static. The gorillas swing on vines, blink, and have shadows that move on the ground in tandem with the gorilla’s movements throughout the scene. When moving from page to page, the scenery rotates into place like a film clip rather than just sliding from frame to frame like a book – a neat effect. 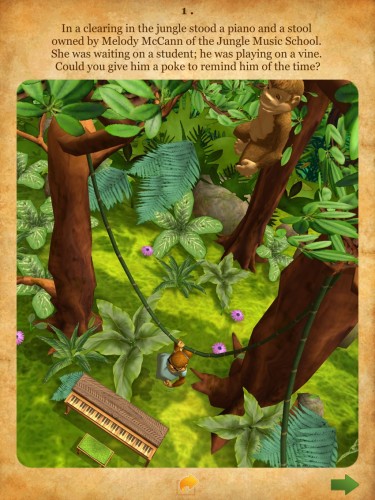 Children are encouraged to interact with the app by tapping on the characters on the screen, which adds to the story by causing them to “play” additional music with their instruments or speak additional dialogue. Each character has several additional lines of dialogue they’ll speak or music they’ll play before they begin to repeat themselves.

If you have a young child at home – particularly an impatient one like my 5-year old – you already know that kids like to keep tapping, regardless of what’s happening on the screen. In most apps, all that tapping interrupts activities and actions in the story (and annoys parents…). The developers of Gorilla Band have added a nice feature to the app that parents will appreciate: a delay between taps. Your kid can just tap away to their heart’s content, but nothing is going to happen until the current action on the screen is finished. 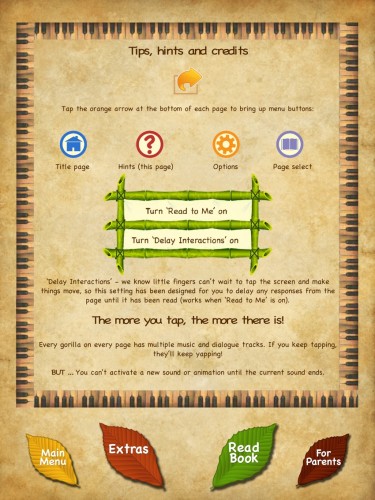 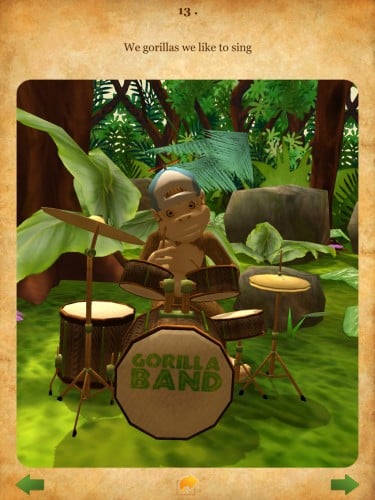 If you purchase the app before December 31, 2013, 10% of proceeds from sales of Gorilla Band will be donated to the VH1 Save The Music Foundation to support the charity’s work in restoring instrumental music education programs in America’s public schools.

MSRP: Gorilla Band is available as a universal app on iTunes for $3.99 and on Google Play for $2.99.

What I Like: Outstanding graphics, the songs are cute and catchy

What Needs Improvement: Not much. The story may be a little bit simplistic for kids at the upper end of the applicable age range, but if they’re like my daughter, they’re more interested in the interaction with the app than the story itself.