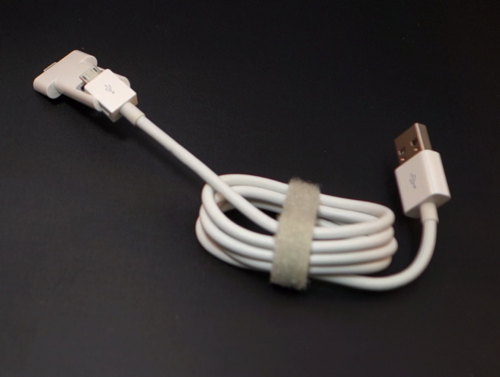 With the arrival of Elana’s iPhone 5C, our household is pretty much all-in with lightning connector-enabled devices. Thing is though, that all of our speakers and Bluetooth headsets use a microUSB for charging. That’s where the Innergie MagiCable Duo with Lightning Connector comes in. It is two cables in one and costs under $30.
. 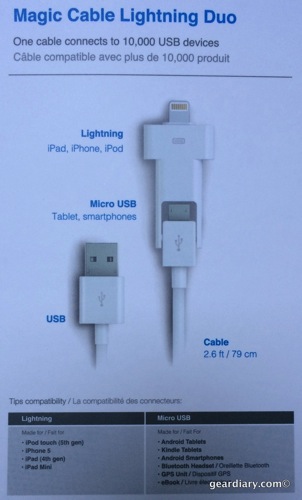 The Innergie MagiCable Duo with Lightning Connector cable is a rather simple design, but it’s potentially quite useful to people like Elana and me. In its main configuration it’s a 2.6′ cable with a USB connector on one side and a Lightning connector on the other. Yes, there is a thick region surrounding the Lightning connector that might be an issue with some cases and docks, but if that isn’t a problem for you, then you’ll be quite happy using this cable with your iOS devices.

The “magic” happens when you pull up on the lightning connector area and flip it down. This reveals a microUSB connector that can be used with most Bluetooth headsets, most Bluetooth speakers, and most android phones and tablets. Yes, this truly is one cable to rule them all.

My two concerns with this cable are the aforementioned thick plastic around the Lightning connector that may make it incompatible with cases such as the various offerings from Lifeproof. The other concern I have is the actual process of making the cable convert from one connector to the other. This area is potentially a weak point, and if you are pulling up and out while holding the cable rather than the plastic of the actual connector, then I have concerns over the cable fraying over time. 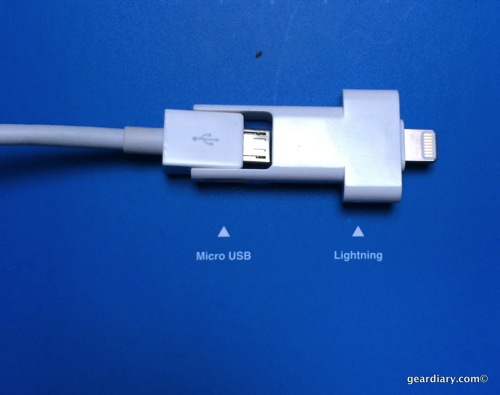 If, however, you are careful when switching the cables function, and you don’t have an issue with the thickness of the Lightning connector, this is a great way to cut down on cable clutter for less than $30.

What I Like: Two cables in one; Nicely priced; Helps keep desks or cars a bit more tidy

What Needs Improvement: Lightning connector design my prevent it from use with certain cases; Hinge and cable attachment point may be a bit delicate and wear our over time. Caution will help avoid any issues.