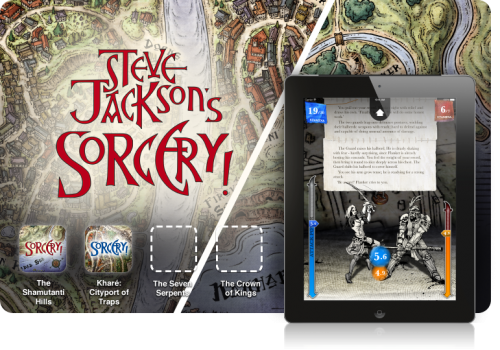 I loved Sorcery! when I reviewed it back in May, describing it as a game that combines classic fantasy story, told as a ‘create your own adventure’, loaded up with fantasy RPG gameplay, with a unique and engaging visual style. As we await the November Part 2 release, Inkle has released a major update making Part 1 worth playing again!

Here are the major new additions to Sorcery! Part 1:
• Female player character: Who says quests are just for boys?! Now play as either a male or a female hero, with dynamic artwork and text supporting your chosen gender.
• Improved magic system: What sorcery is this? Look to the stars for answers! The new 3D spellcasting system is gorgeous and easy to use, eliminating the need to page through the in-game spellbook.
• Fist-fighting mode: Some fights just have to be settled with your fists…
• Simple saved game transfer: To continue the adventure, players with the old version of Sorcery! Part 1 will need to find and type in the name of their saved game. But with the update installed, the Sorcery! Part 2 app can grab this data directly — no hunting and pecking required.

Sorcery! Part 2 will include all of these features, plus it doubles the narrative content of the first game, introduces new enemy types, more complex story branches, a detailed ‘building by building’ city map, and other gameplay enhancements. You can choose to play Part 2 on its own, or as a continuing adventure from Part 1.