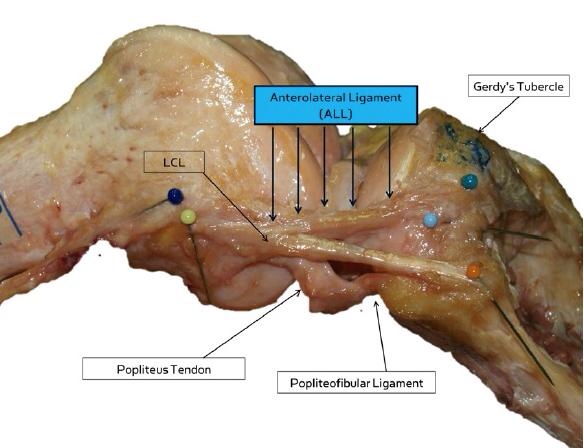 Several years ago I tore my ACL. I sat with the orthopedist and he showed me a model of the knee to explain where the ACL was, what it did, and how they took other bits of a tendon to replace it. I was left with the impression that surgeons know exactly what’s in there, but a new study indicates they’ve discovered a previously unknown ligament!

Yes, apparently there’s another one in there, the Anterorlateral Ligament or ALL. The new theory is that this ligament causes the “pivot shift” sensation when you tear your ACL. Pivot shift is what I used to describe as “two things in my knee just moved and rubbed together that aren’t supposed to, this can’t be a good sign”, and I had that quite a bit in the month between tearing my ACL and having surgery. Now, luckily I haven’t experienced it since the surgery, but according to the study, this explains why some people do.

This is all good news in the long run, especially for women, who are at a higher risk of ACL tears. The more surgeons understand knees the better they can repair issues, and hopefully lower the likelihood of arthritis and knee replacements. At the same time, surgeons have been doing ACL repairs for decades. It boggles my mind that surgeons all over the world have devoted their lives to knees and the tissues in the knee and no one noticed this random other ligament. I know the human body still has many mysteries, but are they always hiding in plain sight?

Are there any biologists or scientists out there who can clarify this for us?