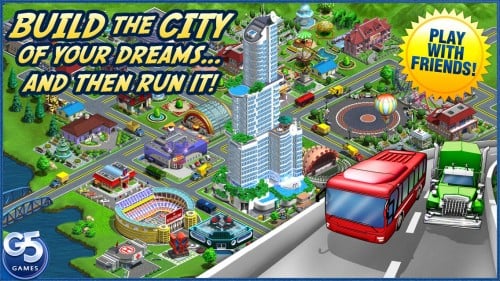 I have reviewed Virtual City Playground multiple times on different platforms and tracked major updates since the game was released. The game takes all of the best elements of Virtual City 1 & 2 and adds great new features and constant free updates. So what remains? A release for Windows Phone and tablets on the Windows Store!

Virtual City Playground is a sim social that lets your imagination run wild so that you can look down at your wonderful metropolis and marvel at the wonders you’ve created. Please your inhabitants by providing them with tons of business opportunities and true-to-life neighborhoods, and entertainment facilities, among other amenities. Master trade, resources and balance between the booming development and the traffic that is a subsequent effect of the former.

Build the city of your dreams… and then run it!

Build dwellings and industrial buildings.
Produce goods and deliver them to the shopping malls.
Set up a mass-transit system to take your citizens to places like parks, cinemas and stadiums.
Make your city a better place to live by recycling garbage, adding hospitals and fire stations, planting trees, and upgrading buildings.
Make citizens happier by launching spectacular public events!

Over 250 uplifting quests to tackle
165+ buildings, landmarks, and decorations to beautify your city
95 achievements to earn
Regular FREE updates to the game, so download and stay tuned!

Grab Virtual City Playground from the Windows Store for free!