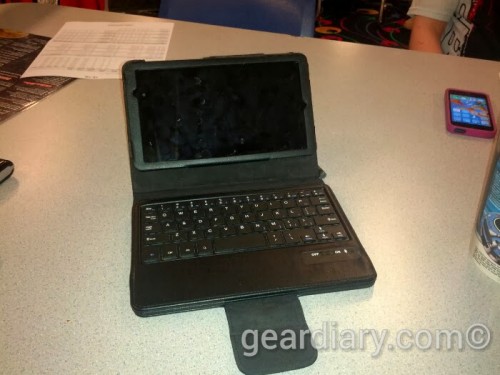 I recently purchased a new case with a bluetooth keyboard for my Nexus 7. After a while, I really started to like using the keyboard.  There will be a full review of the case coming but I wondered: Could I use it to write posts here on Gear Diary? The answer is yes!  However, it does have some quirks.

The biggest issue I am having with writing with the tablet is handling images. The Nexus 7 doesn’t have a way to attach USB storage without running a custom ROM. So you have to get pictures on the tablet in a different way. I used Google+ Photo Syncing to get the photo on my tablet. Also, I tried using Chrome for the better part of the post. This generally works, but I had issues inserting photos using Chrome. I saved a draft of the post and then logged in via Firefox. I also had a rough time inserting hyperlinks as well but I was able to work around it by dropping down to editing the raw HTML and inserting the link. Other then those items and the quirks of the keyboard itself, I think it is a very capable platform for blogging. If the Nexus 7 would have a better camera then I could use it for the whole post.

For my next post, I may try using the WordPress app to draft the post and do some final checks with Chrome to make sure the post itself looks good to go. The app is OK but I generally do not like using it because you cannot use any WordPress plugins in the app itself.

I plan to write more posts using my Nexus 7 and Galaxy Nexus together. More like this one! 🙂  Yes this whole post was wrote on my Nexus 7 with a Bluetooth Keyboard.

What do you think? Can you do the same with your Android tablet?  Have some tips? Share below.