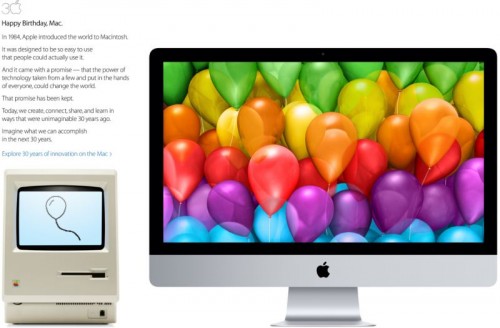 Today, Apple’s homepage celebrates 30 years of the Mac. For those of us who have ‘been around’ – and even more so for those of us who bought and used an Apple ][ before the advent of the Mac, it is at once surprising that so much time has passed and unimaginable that we lived without the convenience of computers.

On their site, Apple has a great timeline starting at 1984 and stepping through year-by-year with innovations and events leading right up to the present. Each page highlights a new product and how people used it.

Here is the opening statement for 1984:

The one that started it all — the original Macintosh — wasn’t just a computer. It was a declaration that the power of the computer now belonged to everyone. At the time, most people didn’t even know how to use one. But thanks to the simple graphical interface of the Macintosh, they didn’t have to. It was approachable and friendly, starting with the smiley face that greeted you. There were folders that looked like file folders and a trash can for throwing things away. And with the click of a mouse, you could suddenly do the unimaginable. You could move things around on the screen, change the way they looked, combine words with images and sounds, and create like never before. A new era had begun.

But this week also marks 30 years since Apples’ infamous 1984 commercial played, so I thought as Apple celebrates 30 years it would be fun to highlight a few intriguing commercials through the years, starting with 1984:

So … what is YOUR favorite Apple product, commercial, or memory?