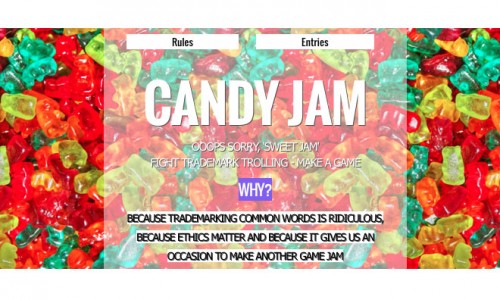 Candy Crush Saga developer King made waves recently by trademarking the word “candy” in Europe.  Yes, it’s just as ridiculous as it sounds.  Several European game developers have banded together in a protest of sorts called Candy Jam, in which they are writing games involving the word “candy” for two weeks.  You can read more about it here.

Game developers are not only upset with King’s trademark of the common word “candy,” but with their apparently constant copying of others games.  You can see some examples of these offenses at the Candy Jam website.  Also, King has been known to aggressively attack those who they feel are trying to hone in on their intellectual property, whether it’s valid or not.  You can read more about that claim at Rock Paper Shotgun, where they discuss King attacking a small game developer for using the word “saga” in their completely unrelated game.  Meanwhile, game developers have banded together during Candy Jam to develop over 300 games involving the words “candy,” “banner,” “saga,” and more.  This could keep King’s lawyers busy for years!

Long story, short:  King allegedly rips off others games while viciously attacking those who use common words like “saga” in their own, totally original games.  What do you think about all the hubbub?