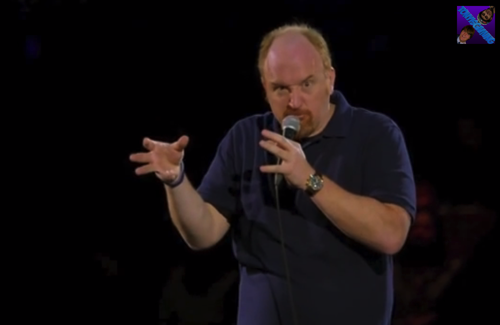 A post over on TechCrunch includes an embedded bit by Louis CK that is hilarious. It also contains colorful language — you’ve been warned. The article goes on to unpack the psychological maneuvers the comedian employs to get his laughs and make his point. The video is a good laugh, and the post is a fascinating read.

On the surface the bit appears to be Louis CK’s take on “On the one hand… On the other hand”. (Or, as he puts it, “Of course… But maybe.”) So, for example, on the one hand “Children who have nut allergies need to be protected… of course…but maybe…if touching a nut kills you…you’re supposed to die.”

This may, at first, appear to be a cheap throw away joke but there is, as James Altucher goes on to explain, much more to it than that. Altucher goes so far as to make the case that Louis CK employs the same psychological tools used by the Hare Krishnas. The full article, which can be found here, is worth a read.