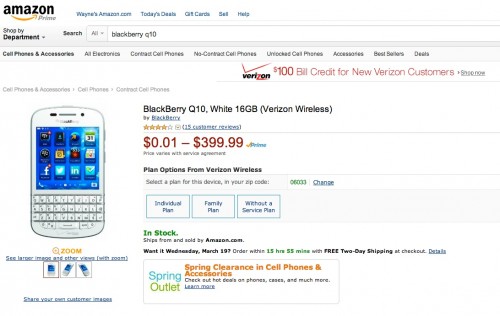 I’ve been eyeing the no-contract pricing on the BlackBerry Q10, and last week the non-contract price suddenly plummeted from $599 down to $399 for both AT&T and Verizon, so I bought one. As of now, the price on Amazon continues to fluctuate between $399 and $ 599 — likely because of some type of demand pricing algorithm Amazon uses.

This pricing matches that of the online carrier stores for AT&T and Verizon, who have also quickly reduced the no-contract pricing on the BlackBerry Q10 to$ 589 and $599 respectively. I’ve found purchasing phones online to be much less of a hassle than waiting in line at a carrier store, so given the choice I always buy online.

Why did I buy a BlackBerry Q10 ? After all aren’t BlackBerry’s all but done and over in North America?  Recent statistics show that the BlackBerry market share is around 3.1%, and they were recently passed by Windows Phone which clocked in at 3.2%. Given the chance by T-Mobile, over 94% of BlackBerry owners switched brands rather than upgrade to a newer module.

This is a nosedive I do not believe BlackBerry will pull out of. They may level off, but recovery at the consumer level will elude them.

My reason for purchase was simple. Sentimental. I think this model will be the last consumer BlackBerry,

A trip yesterday through the mall confirmed my hunch. Stopping in at both the Verizon and AT&T stores, there was not a single BlackBerry on display. Both stores appear to have joined T-Mobile in offering BlackBerry only by online ordering.  Now even display devices are gone from the two largest cellular providers in North America.

Think about how radically awful this is for BlackBerry, despite how they may spin it. As recently as the BlackBerry Storm device, Verizon was eagerly promoting the BlackBerry, and they fully stocked various models and colors. Now there’s not even a space to look at and try these devices – never mind that you cannot purchase them at retail any longer.

And there’s another reason for buying BlackBerry: Nobody is going to steal it.

Seriously. This is the perfect phone to slap a SIM card into, and use while traveling in the city, or to keep as a spare for the kids to take on a field trip.  The Verizon Q10 is reportedly SIM unlocked, and it works on both AT&T and T-Mobile (though not at LTE speed).

But in reality, this purchase is mostly sentimental. I started with the first model of BlackBerry — the 850. I have owned just about every model, and now I’m going to own what I believe will be their last consumer model as an independent company – the BlackBerry Q10.