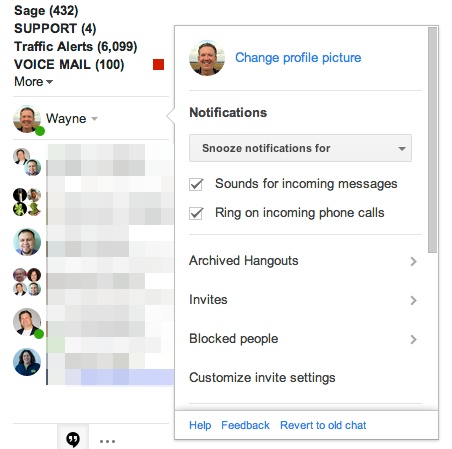 I love Google Hangouts. I think Hangouts is the best free group messaging service I’ll never convince most of my family and friends to use. Until today I had one major problem with Google Hangouts when used inside Gmail; because I also use Google Voice, every incoming call would ring in my Gmail Hangouts. A new update has fixed that.

Rolling out today, Google has improved the Gmail implementation of Hangouts so that Google Voice users can uncheck a box that says “Ring on incoming phone calls”. No more annoying ringing phone when I’m on-site at a customer’s with my Gmail open.

It was so incredibly dumb to force all Google Voice users to have their Hangouts also receive incoming phone calls — with no option to mute the ringer — that I’m not surprised I’ve had difficulty convincing my family and friends to use this nice little messaging app.

If you’re not seeing the new Hangouts menu in your Gmail, then give it a day or two; Google says they are rolling this out gradually. Another new feature is the addition (reintroduction?) of a green dot alongside contacts you’ve chatted with before to indicate when they are online and available to receive your annoying instant messages.

And if you are not using Google Hangouts, why not? Unlike some other messaging applications, Hangouts is whip-smart and won’t beep every device (think phone, tablet, desktop) where you have the application running. It remembers the last place you interacted with hangouts and will only notify that device – thus saving you from hearing the same notification go off several times per message. Hangouts also integrates perfectly with Gmail (both the free version and the paid Google Apps version).