After Apple’s iOS 8 preview at WWDC, I posed the following query to the Gear Diary Team:

Carly: So for everyone who has used iOS and been using Android, or for those who have used both platforms…does iOS 8 make you want to jump back to iOS full time?

Personally I think this looks like an awesome upgrade.

But it still feels like catch-up; we’ll have to see how the whole thing comes together. 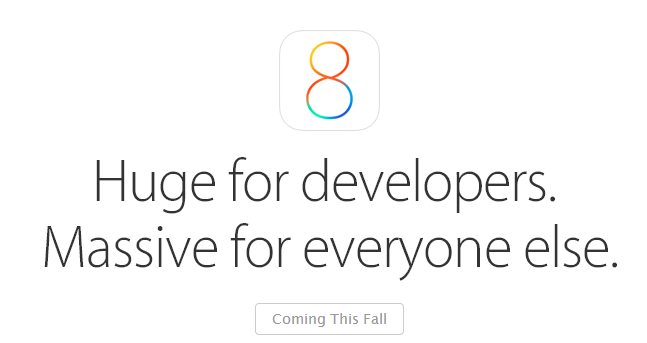 Judie Stanford: It will honestly depend upon the hardware for me. I am loving my Z2, and although there are some iOS features I miss, nothing is a deal-breaker at this time.

Perry Brauner: Definitely catch up. Predictive text and Swype? So 2011. That being said, a definite improvement over the current iOS.

Wayne Schulz: The screen size needs to increase along with better battery life. It’d be shocking if that didn’t happen by year-end.

Dan Cohen: Yes on many levels. I think the big news here is the integration between iOS and OS X. We won’t see the two merge into a single platform the way some expected and that is a good thing. But the tight integration that is coming in the fall make it much more logical than ever before for people to be on a single platform. For me the ideal setup would be a larger iPhone, an iPad and a 12” powerful MacBook air retina. Give me that and I’m very happy being all-in again.

Judie Stanford: 12″ MacBook air retina? What are you smoking?

Wayne Schulz: Wonder how many developers will take this opportunity to sell new versions of their apps vs free upgrades

Judie Stanford: That may be an issue.

Carly Z: That’s a good point…I wonder if the integration will sell people on Mac upgrades that they may not have jumped on before…it provides more incentive to update older hardware, where before there may have been pushback of “oh well I have an iPhone, and an iPad…do I need to upgrade my MacBook this year or next year?” now there’s a good reason to make sure you can run Yosemite well.

Wayne Schulz: Ecosystem. It’s all about the ecosystem. Another word for it is lock-in. Make your stuff work well together — but not too well outside Apple. Notice there was no real announcement of anything outside the ecosystem, save for iCloud.

Dan Cohen: Yes but Wayne don’t know know it is all for the good of the consumer as they give end-users the best experience possible. This is selflessness at its best…

Travis Ehrlich: I love the integrations of devices! The fact that my phone, air, iPad, and Mac mini will all work together is exciting. Hopefully it doesn’t just work on new hardware!

Mitchell Oke: I was always planning to pickup the 4.7-inch iPhone when it launches, and the ability to add SwiftKey will help make that decision even easier. It one of the things I am LOVING being back on Android with the Moto X.

Michael Anderson: I guess I don’t get the ‘catch-up’ thing. Android is generally a ‘sloppy beta’ system with tons of extra stuff 99% of people never use but pay for with erratic performance and lag (yes, even current systems), Samsungs apps are uniformly inferior, HTC is so niche they don’t matter more than Blackberry, and WinPhone … um, yeah, sure, whatever. I still see nothing different from the iPod / iPhone approach … first? Never. Most refined? Always. Posing this as more of a ‘devil’s advocate’ thing … because the ‘catch up’ is now put out there like the usual ‘Apple is doomed’ talk.

Carly Zektzer: The thing is, Apple in the past has innovated and improved what they offered. Here, it feels more like it was a “oh, you want this? Fine, here are widgets shoved in the notification shade, and we’ll give you third-party keyboards. Happy now?” There are some really cool aspects of iOS 8, but there’s a lot that feels like Apple needed to shove in features that people were complaining they didn’t have. But remember, NEVER ABANDON THE ROWS OF ICONS. ROWS OF DEAD, UNANIMATED ICONS FOREVER. AND EVER. AND EVER.

There are definitely ways in which iOS is quite polished. But it’s worth noting that less apps crash on my HTC One than they do on my iPad. Calling Android a “sloppy beta” is pretty harsh. My One has been rock solid, games are fast, animations are smooth, the battery lasts forever, and it’s been awesome for me…if any OS is a beta it’s windows phone, but even that is rapidly improving in features. It’s fair to like one over the others, but Android on the latest iteration Is quite far from beta. And I don’t think Apple is doomed. But I do think they are playing defense and not offense.

Wayne Schulz: Where Android really shines is in the sharing ability. I can share just about anything to just about any application. We shall see how easy the sharing becomes in iOS 8. I know they’ve promised – let’s see how it is delivered.One thing that Apple has going for it is inertia. I love Google Hangouts messaging mostly because I live in Gmail a good part of the day. The problem with Hangouts is the damned Google account curse. Either nobody wants to create a Google account or they have multiples (all with the same profile picture() so you’re never really sure whether you have the correct account. All of my family is on iOS – so guess what I use to message with them? Instead of pulling people back from Android into iOS – which certainly some of that will happen – I think you are going to see that iOS 8 drives the final stake through the heart of BlackBerry and slows adoption of the non-budget Windows Phone devices. Who in their right mind is buying either of those and why? Answer: Not many people are and not many people will – there’s simply not enough apps or strong enough ecosystem for either.

What’s your take on iOS 8? Join the conversation below!